It might appear that we are miles away from civilisation – at least, from what we know this to be, in terms of the every day hustle and bustle of London – but, not only are we surrounded by what could well be remnants and remains, artefacts and evidence, of myriad other civilisations, both modern and ancient, but, we are, almost as centrally placed in the English capital as it is possible to be.

In fact, we are standing in the one time multi-storey car park on the long derelict site of one of London’s largest Odeon cinemas, on Grafton Way, just off Tottenham Court Road. This dark, dank, deserted basement is currently host to the latest Artangel commission, Dig, by sculptor Daniel Silver.

Fragments, oddments, body parts and tools are strewn all around, assembled on wooden benches, like in an archaeological workshop. Taller figures and busts, some on plinths, rise out of the mud and clay.

Made by hand, in a range of materials including marble, plaster and terracotta, these objects are deformed, broken, weatherworn. Their appearance is deceptive and confusing: at first glance they could be Roman emperors; at second, Incan gods; at third, remnants of an art class held here in contemporary London.

Silver was in part influenced by Freud’s collection of sculptures, amassed on his travels around the world. The father of psychoanalysis often referred to archaeology as a metaphor for uncovering desires and phobias. Art, of course, can also provide a form of sublimation.

Here, at the furthest end of this large gloomy underground burial chamber, a plaster sculpture of the man himself reclines on a wooden version of his famous couch. The strange bulbous forms bedecking him perhaps reference the brain – the physical home of his object of study, the complex human mind.

Here, just next to the couch, a shinier more honorific marble stands to his glory.

Trudging through mud and puddles overgrown with algae, balancing across planks, breathing in a stagnant odour and followed by a continual dripping, echoing soundtrack, there is something very Indiana Jones about visiting this site. The visitor becomes an intrepid explorer, wending his way through Silver’s treasure trove, on a voyage of discovery. Whilst following the path laid out by the archaeologist cum artist who went before him, each must equally steer his own course. Archaeology here is not just a metaphor for uncovering desires and phobias, but it is fuelled by both of these, which lead and avert you – one minute encouraged by intrigue, the next repelled by fear – through the mire and shadows, across the centuries and across the globe. 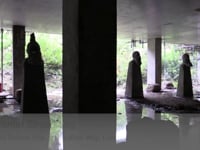