Daniel Libeskind's new building, an adjunct to the Imperial War Museum in Lambeth, South London, is situated beside the Manchester Ship Canal in Salford. Somehow this was a perfect 'stealth' affair. While the launch was crowded, very few of those present had ventured Northwards from London, a capital which seems, while it still deliberates on the pros and cons of the superb 'Spiral' addition which Libeskind has designed for the Victoria and Albert Museum, wholly oblivious to the masterwork presented here by Libeskind to the clear approbation of War Museum curatorial staff. 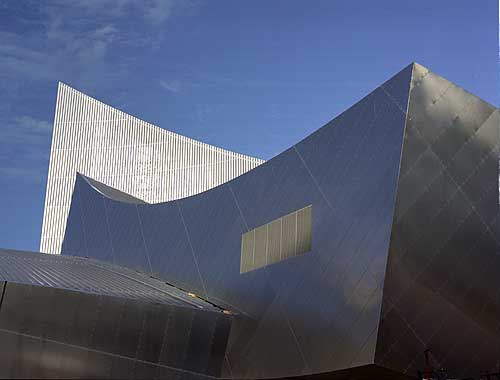 The new building stands opposite Michael Wilford's Lowry Centre, and of course the two could not be more different. However the Lowry was awash with National Lottery funds, while the War Museum was denied any of that. Indeed many of the War Museum North's abject opponents sincerely hoped that this would scupper the canal-side dream. Failing thus to achieve the £40 millions actually targeted, Libeskind achieved, with great resourcefulness, a major miracle of economy and architectural professionalism within a budget of £28.5 millions. He drastically revised the materials schedule and, minus the auditorium (still planned) and by converting the structure to steel and aluminium cladding, maintained the dramatic formal composition with which he had won the competition, virtually unchanged. An ironic, unwarranted loss was the external landscaping and planting. And yet what transpires from this further economy is the reality that such additions are not missed - Libeskind's building creates its own unique and moving landscape, hard textured by the wharf.

The underlying concept for the Imperial War Museum derived from the pieces of a smashed globe. Leaving three major shards lying, Libeskind observed how these pieces contained the poetry and the pathos of war. He chose to interlock these shards dramatically, if coincidentally. The individual forms were taken to symbolise war at sea (the water shard), war in the air (the vertical air shard), and war on the ground (the earth shard), Out of that chaotic incidence Libeskind has fashioned this new container. The three shards offer within, a key to the product of war, the resultant process of transformation for civilisation. The Manchester skyline, itself once severely blitzed in World War 2, is now punctured by the 55 metre-high vertical spire of the air shard. At the base of this the entrance has been placed. And from that point visitors can rise 29 metres up to survey Manchester's surrounding land and water features, buffeted within the aluminium structure as if in a warplane.

The main public galleries of the museum are housed on the first floor level of the earth shard, a gently curving surface, with one gallery for special short-term exhibitions and the other housing the permanent exhibition. The third, lower slung 'water shard' overlooks the canal and contains a restaurant and offices, in prime position, looking over the quite different architecture of the Lowry Centre. Libeskind would like to say that he builds in a world of order and disorder - he seeks here to explore the constant state of the "in-between", given the spirit of democratic openness, plurality, and potential. An outstandingly talented musician before he became a composer, he seeks references within the work of contemporary composers, such as Schoenberg and John Cage. themselves building on such values.

The shards of the museum now gleam in the northern light, glinting in aluminium splendour (and this very much a material developed in wartime expediency). Magically, the building 'sings in the rain' as water flashes down its surfaces, glistening in any dull sky. From the quayside entrance this building is seen at its very best, especially if the visitor walks in across the new bridge from the Lowry Centre. A clever move has been to locate a small grey naval vessel adjacently to the Museum. Like a seagoing vessel the Museum itself channels canal water through pipes sunken in the floor, under the curving first floor. This is sustainability applied to the cooling system, a typical Libeskind touch that converts raw technology into poetry.

Museums are about memory, and the indebtedness of civilisations, through readily accessible, authentic artefacts as relics of the archaeology of war, both private and personal, and collective and communal in their significance today. The teamwork of architects and curators has enabled the central space to become something of a mediatheque in maximising the projection potential of the internal walls and spaces. The ancillary spaces are adorned with carefully selected key memorabilia. A US Marine Corps Harrier is suspended in one corner: a Soviet T34 tank looms: and around the corner, as if to symbolise the aftermath of war, a diminutive and almost comical 'Trabi' uniform peoples' car is lodged tentatively, itself soon to become extinct through capitalism. Memory is plumbed more deeply by the "button-push" accessible Time Stacks; here trays of selected objects appear in rotation vertically, behind glass in the traditional way. This material comes thematically ordered. At fixed times of day, curatorial staff assist visitors actually to touch and handle such objects and documents. This system might also be transferable to Libeskind's Jewish Museum in Berlin, which has no such technical facility.

Chronology is greatly clarified for visitors circulating around the Museum in the conventional manner by a visible mural 'Time-Line" which creates a kind of spinal pathway through the various fixed displays, treating distinct periods of the past century. Complementary to this are the silos which adorn the towering exhibition spaces. Such subjects as experience of War, as Science, Technology and War, or the Legacy of War, are well-crafted set-pieces in the great curatorial tradition, often seemingly archaeological in the presentation of the object, yet redolent of the great tide of war as it has swept across countries, scything its swathes through the history of different nations. And above all, the 'Air Shard' looms, accessible in an open lift as if moving through a structural frame more akin to a biplane or a Wellington bomber's fuselage.

This building is a great triumph for the architect, Daniel Libeskind, and for past and present directors and curators of the Imperial War Museum. Its Board should be congratulated on their own vision and determination in bringing this masterwork to fruition, on time, and also within budget. 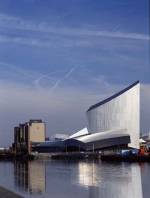