Museum and Art Gallery of the Northern Territory, Darwin
22 May–12 July 2010.

Colour Country: art from Roper River is showing in its final venue in Darwin, in Australia’s Northern Territory, this month. It is a profound exhibition of beautiful paintings from a small community of distinctive artistic endeavour, the Roper River. The Wagga Wagga City Council put the exhibition together as part of their Mawang (Altogether) Programme to celebrate Indigenous Culture, to showcase the Aboriginal art and to be inclusive in cultural terms. Mawang means “altogether” for the Wiradjuri people who are the traditional custodians of the Wagga Wagga region.

The dynamic and pictorial art from the Roper River region is characterised by diversity. The travelling exhibition, Colour Country: art from Roper River1 curated by Cath Bowdler, opened at Wagga Wagga Gallery, in June 2009, in an attempt to define the commonalities in the work of artists, who are apparently heterogeneous: Ginger Reilly, Willie Gudabi, Djambu Barra Barra, Amy Jirwulurr Johnson, Willie Gudabi and Moima Willie and Gertie Huddleston. The Ngukurr community, at the very south-eastern edge, of Arnhem Land, grew out of the Roper River mission, established in 1908 by the Church Missionary Society in a humanitarian vein, as “palliative care for a dying race”.2 In spite of a history of conflict and massacre the community has recently developed into a strong art centre. The Church was replaced by a Government agency in 1968 when its name was changed to Ngukurr, which means a place of many stones. In 1987 under the guidance of the Northern Territory Open College of TAFE, the people at Ngukurr had access to acrylic paint and canvas. The introduced materials provided an essential catalyst for an outpouring of imagery, for the development of dynamic and innovative works. As Cath Bowdler points out, art from the Roper River “consistently defies easy categorisation, and in this way is a potent reflection of the society….  The [artists] work has been formed from personal histories and cultural backgrounds which were surprisingly different from one another”.3

Perhaps the best known of the Roper River artists was Ginger Riley Munduwalawala, who died in 2002 after establishing a spectacularly successful career, taking up painting at the age of 50. Judith Ryan points out:

Ginger Riley's superlative colour sense sets him apart from other Indigenous Australian artists. His unique landscape manner, studded with icons of identity and place, is instantly recognisable yet it has attracted both passionate acclaim and vitriolic criticism. This is because Riley's joyous paintings of colour and light capture popular imagination but do not quite fit with mainstream forms of contemporary art or with stereotypical notions of Aboriginal art. Unlike Papunya Tula paintings, Riley's work does not accord with abstract expressionism, minimalism, geometric abstraction, conceptual art or op art. It also sits uneasily with the quiescent ochre tones and sacred rarrk of Arnhem Land, the bi-chrome planar maps of the Western Desert or the tough works by politically aware, city-based Indigenous artists.4

The works by artists in the Roper River area are characterised by fluid and emphatic line, and bold and dramatic colour. The work of Gertie Huddleston reveals the impact of the Christian Mission on the Aborigines of the Roper River area. Her biography as that of various individual artists from this area is key to understanding her work, which “inhabits an intercultural space”.5  The garden imagery has Biblical connotations; it also shows the influence of Western growing of vegetable gardens at the Roper River Mission. Flowers, too and small creatures are portrayed as part of the rich tapestry of nature. Indeed, Gertie made embroideries for years before she took up painting. In a contemporary context, the sewn line is seen as an extension of drawing. Sewing also links the celebration of female work with the Women’s Movement and the reappraisal of marginalised individuals and cultures against the hegemony of Western art. Gertie’s painting is constructed as if each stroke of paint were an embroidered line, creating a layered surface to celebrate life.

Gertie Huddleston is a practising Christian, who also maintains traditional beliefs and knowledge systems. Her paintings represent an Aboriginal world-view as well as a Christian one in which she depicts ‘country’ consciously and joyously as a ‘Garden of Eden’, and as such, an abundant source of bush tucker and medicine. [Her] paintings reflect a wholly indigenous experience of ‘country’ despite their Christian allusions and their superficial resemblance to Western landscape paintings. Gertie’s story of walking between two worlds is reflected in her paintings.6

The boldly composed landscapes of Amy Jirwulurr Johnson are of her ancestral region. They capture a fantastic quality in nature, where the movement of fish or birds in flight pulsate with the very essence of life. A recent work, Untitled (2003) takes the viewer into the landscape revealing the splendid patterning in nature, creating a perfectly balanced composition, in violet, red and yellow, with black and white detailing. The immediacy of the drawn lines, the essential qualities of each creature, is given a larger than life presence. As with all Aboriginal art, the work of Amy Jirwulurr Johnson is deeply rooted in her ancient heritage.

Amy Jirwulurr Johnson is the widow of Djambu Barra Barra, (1946–2005), to whom this exhibition is dedicated.  His boldly graphic coloured works established him soon after the introduction of introduced materials were made available in 1987: “The Ngukurr paintings burst on the scene like something out of left field. Nothing was familiar; there were no meticulous fields of dots, natural ochres or detailed cross-hatching”.7 In spite of apparent success, and regular exhibitions, the Ngukurr artists have always struggled without sustained funding, which some believe has enabled the work of Ngukurr “to develop in its own myriad directions, relatively free from the interventions and restrictions of the art advisors who have guided the aesthetic character of most remote art centres… Ngukurr Arts, the artist-run community art centre, has produced arguably the most consistently innovative forms and styles of any remote community”.8 Amy Johnson’s apparently naïve depictions of the local land and billabong regions of the Roper River combine bark painting techniques and figuration. She worked collaboratively with her husband (for almost 20 years), and their respective art practices share similar motifs and a stylistic affinity. As her career developed Amy’s own artistic identity flourished. She and Djambu Barra Barra exhibited in numerous group exhibitions at Alcaston Gallery in Melbourne from 1989 to 1997, and at Hogarth Gallery in Sydney and in a number of important group exhibitions throughout Australia. Rebecca Hossack Gallery in London exhibited their work in 1999.

Living at Costello Outstation, 25 kilometres from Ngukurr, the animals and birds that inhabit the country there, form the subject matter form her dynamic figurative works. This is her mother’s country, where the stories and totems provide her imagery, a delicate balance ‘between individual innovation and painting by a strict set of rules, as a female artist in Ngukurr’.9 Amy learned about her cultural history from her mother (who died in 1990) and from her husband. In contrast to Barra Barra’s distinctive work she presents animals and birds grouped as an environment or as a collection on a coloured ground; her work does not portray major ancestral figures in ceremonial roles, nor does she use cross-hatching or other stylistic devices associated with bark painting. Instead she portrays creatures associated with her mother’s country, that fall in to different categories: “public paintings of totemic species, that an artist has the right to paint” 10 and creatures with more mundane meanings.  Her animals have cultural associations to her country and her dreamings. Amy Jirwulurr Johnson’s particular totem is the pelican, which appears in a number of her works, but other creatures are more commonly depicted.  A wide and vivid range of colour is characteristic of her work, that sometimes resemble the cut-out drawings of Henri Matisse, marvellously busy pictures of a world in which abundance in physical and spiritual terms exists, in the artist’s words, “This is a good place”. The picture plane is often divided into areas of colour divided to suggest topographical areas of country. Although the areas appear to mirror foreground, middle ground and background they are not created intentionally in this manner. She does however, refer to her recent works, since 2002, as “landscape paintings”11 of both a particular place and anywhere, a universal notion.

The exuberance of Amy’s work is immediately recognisable, images of vibrant activity but also of calm. The drawn lines are descriptive and form a cohesive whole, alluding to the lush and varied environment around the Roper River. The recent works are intensely worked, “with an even greater concentration of life, creatures, plants and activity, characterised by increasing compositional complexity, greater decorative detail and a more diverse colour palette”.12 She describes lived experience, with an informed observation of the cycles of nature, the habits and behaviour of the animals and birds that guides her work, with an apparently ingenuous spirit. Her work cannot be perceived of a simple, however, but as a body of work richly perceived and beautifully rendered.

Colour Country: art from Roper River, is an exceptional exhibition that makes a significant contribution to scholarship in Aboriginal Art in Australia. The catalogue too, is an excellent publication, which will continue to expand the awareness of the rich and complex artistic heritage of Indigenous Australia in the 21st century. Cath Bowdler sums up the essential character of the work of Roper River artists, as embodying “the tensions and possibilities of an intensely intercultural arena, both historically and in recent times”.

These artists created paintings of startling refinement, originality and contemporaneity that reference their Indigenous world view, but also talk to the western viewer. The works are site specific, alive with meaning and essentially metaphysical and religious in conception. As Aboriginal artists, they tread a fine line between constraints of subject matter and style and negotiate culturally specific forms to produce aesthetically sophisticated and meaningful works of art. These works talk to each other and to us, expressing a world that we may never see or understand and yet one with a numinous presence that is alive and vital.13 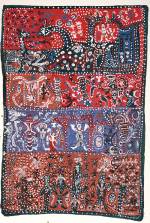 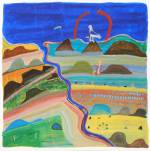 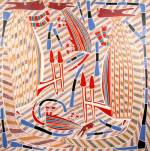