Nominees for this year’s Catlin art prize are exhibiting their work at the Londonewcastle Project Space in east London. The prize, which has been running for eight years, offers artists in their first year following graduation a chance to win £5,000 to develop their practice at this crucial early stage in their career

Seven graduates from across the UK were selected by Catlin curator Justin Hammond to show new work in the exhibition. The winner will be decided by a panel, including artist and Turner Prize-winner Mark Wallinger, on 14 May 2014. The front of the gallery has been transformed from a discreet door on Redchurch Street to a banner of bright blue paint with the words “Catlin Art Prize 2014” lettered across it. Beyond, the gallery space is a series of small rooms that flow into each other. Each artist has enough space to occupy, allowing an installation to form. 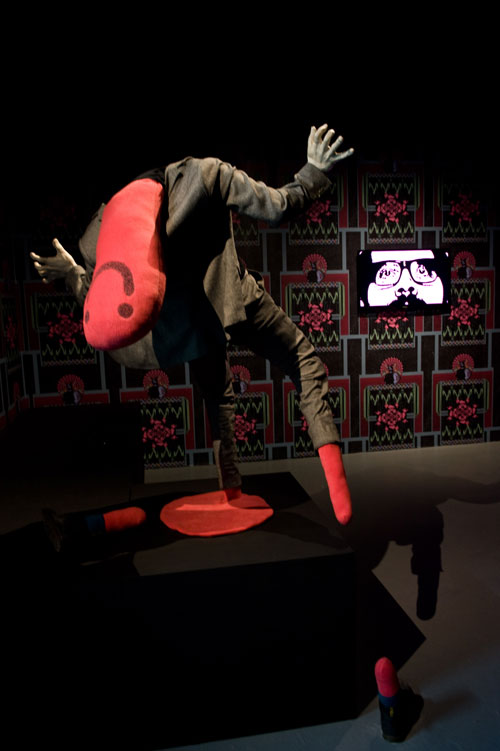 Dennis J Reinmüller, a graduate of Edinburgh College of Art, opens the show with his bold and intentionally overbearing installation. A wallpaper of his adorned self-portrait darkens the space, the ultimate gesture of self-appreciation. A telephone rings: it’s Reinmüller’s Echo Chamber, a telephone with a number painted above. I call the number and someone picks up. After a brief conversation, I feel a tap on my shoulder. It’s Reinmüller himself. He explains that he is selling three unique telephone numbers, which can be bought for £1,000 and allow lifetime access to the artist. His sculpture How are you doing? is another self-portrait. The figure, bent over backwards in an absurd lurch, is abstracted into a red finger shape with a smiley face at the tip. Reinmüller gives the sculpture a tap and it bobs back and forth in a comical bounce. The appearance of the artist himself and the funfair of narcissistic activities complete the artist’s expression of the contemporary self. 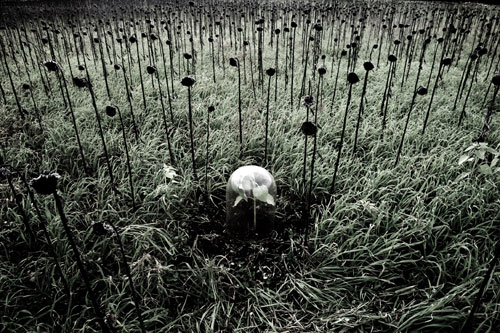 The next room is the work of Central Saint Martins photography graduate Lara Morrell. Centrally placed in her space is Memento homo, quia pulvis es et in pulverem reverteris (Remember, man, that you are dust, and unto dust you shall return), a mirrored block on which sits a gnarled and intertwined mass of vine cuttings, ash and sapling. Its dry claws and brittle twists are mirrored in complete exactness, like an object from a dark fairy tale. Spotlit photographic prints line the walls. The series Christ Stopped at Novoli pictures religious saints as headless hay substitutes surrounded by their symbolism. Printed on to substrate wood, the dark ink shines under the spotlight, revealing veins of texture, forests and smoky fires. She worked for a time in a small village in northern Italy, and uses her work to illustrate the yearly harvest and religious festivals that punctuated the cycle of time in the village. 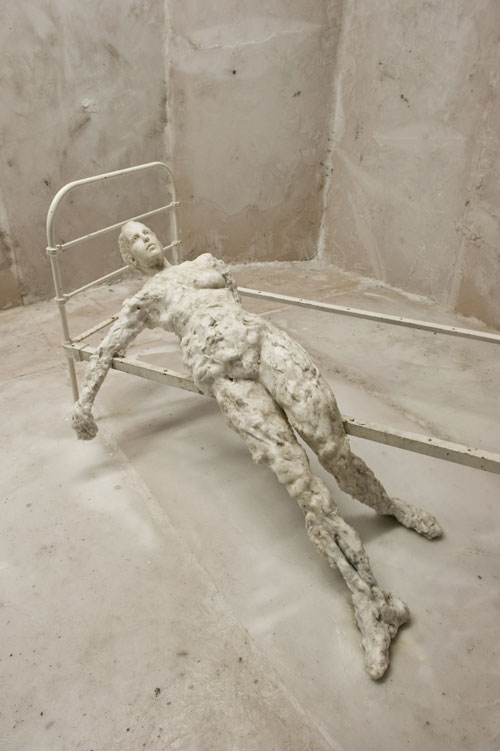 The viewer moves from darkness into light, confronted next by Virgile Ittah’s white wax, which covers the floors and walls of her space. The Royal College of Art sculpture graduate has created a full installation designed to bring the audience into direct contact with her work. Two figures, made of wax and marble dust, slide off their iron, hospital bedframes on to the floor. In the figures, caught somewhere between life and death, Ittah captures a moment of human transience. Her work is informed by her personal background, yet she hopes that her sculpture will revive personal memories for those who view it. In no reflection of a memory, but perhaps a nightmare, I run my fingers across the walls and sink my nails into the wax like a mad woman in an 18th-century asylum. 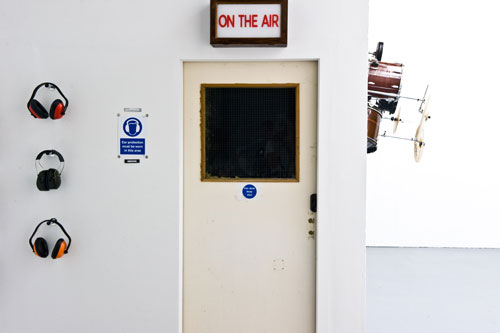 The next space belongs to Central Saint Martins graduate Sarah Fortais. Her inverse installation uses the ceiling as a base, with a painted coffin, a carpet and a drum kit inhabiting the upper void of the room. Her video and sound installation requires full engagement, as the sound of five drum kits simulate the sound of take-off. A small book documenting her process is tucked in its own alcove, challenging the audience to explore. Morrell describes her work as a “bricolage”. 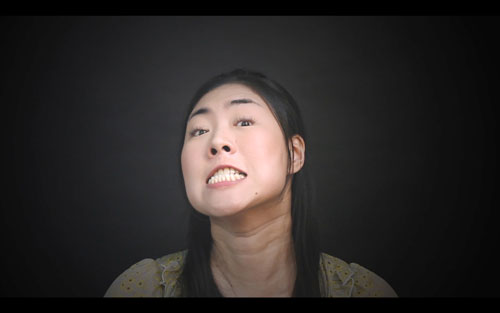 Jakob Rowlinson. An Arrangement of Gestures (after Ptolemy's Tetrabiblos). Still from HD videos. Courtesy the artist.

Jakob Rowlinson, a graduate from the Ruskin School of Drawing and Fine Art, Oxford University, presents a video work, An Arrangement of Gestures (After Ptolemy’s Tetrabiblos), which explores the facial movements in relation to astrology in a series of 24 films – one for each day of the exhibition. It is a continuation of a previous project titled Facial Poetics, in which an actor expresses the smallest facial adjustments like a language. The installation includes astrological charts of pencil and gouache on paper that relate the facial codes back to the artist’s personal astrology. These diagrams, skilled and interesting works, supposedly allow the viewer to translate the video work. I look around for a direct telephone line from which to call up the artist to help me out, but I’m left in the dark attempting to decode the work alone. 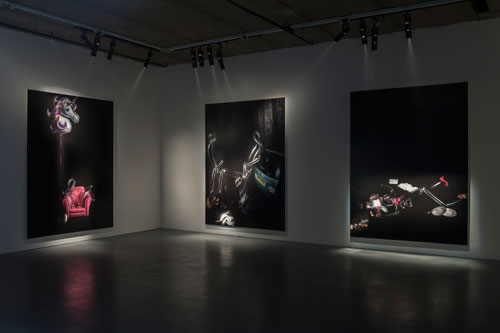 The final room, and highlight of the exhibition, shows the work of Mr & Mrs Philip Cath (Goldsmiths, fine art) and Neil Raitt (Royal College of Art, painting). The Caths’ work is a monumental four-part series called Eve’s Progress, based on Hogarth’s morality scenes of the 18th century. The contemporary scenes are based on feminism, now activated every day in the news, using chosen objects to criticise the controversies and contradictions of the conversation. Black backgrounds are dense and still-life scenes are dramatically lit with Caravaggio-like contrast. Figures constructed of balloons are composed with objects that exude a feminist unpicking; a pig’s head, a can of pussy and the boot of a car. 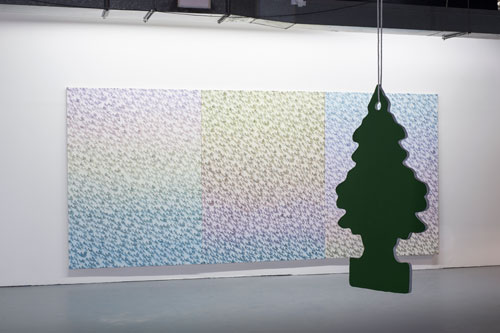 Raitt’s triptych, Fade, painted in oil on canvas, shows the repetitive patterning of mountain peaks copied with exacting style from Bob Ross’s 1980s TV show The Joy of Painting. Reassessing the cliché and embracing rather than avoiding the accessibility of painting as a craft, Raitt combines Ross’s formula with accepted motifs of contemporary art. Like a friendly giant, Magic Tree slumps in momentous sadness against an internal pillar in the space. An ode to travel, or perhaps its memory, this oversized Styrofoam magic tree is coated in pigment and pine-scented oil, where smell becomes a nostalgic symbol for a forest once explored.

Visitors can cast their vote at the end of the exhibition into one of seven blue boxes, which sit alongside a pile of cards and a few ballpoint pens to scrawl an impromptu reason for your vote. The winner of the visitor vote will receive £2,000. Personal taste is the only thing that can guide your vote, because the artists are completely diverse in their ideas and practice, operating and thinking in different ways. With their commonality being the early stage of their careers, it is exciting to see new work that has been made over the past year with education fresh and the Catlin prize exhibition in mind. 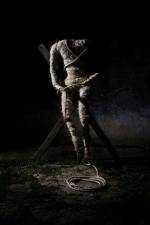 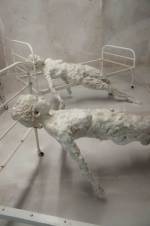 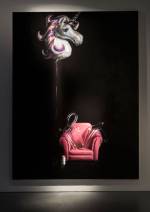