Caravaggio-Bernini: The Baroque in Rome

Caravaggio-Bernini: The Baroque in Rome

This is the first major exhibition to pair the greatest painter of the baroque period with its greatest sculptor, along with several of their most accomplished followers. It’s a winning combination

You cannot avoid looking straight at it. The first sight in this remarkable exhibition at the Rijksmuseum is Gian Lorenzo Bernini’s head of Medusa, wigged in a writhing mass of snakes at once tactile and repellent. This Medusa will not turn you to stone; she is the one carved of cold marble – yet astonishingly, dynamically alive. View her from the left and her face is calm; from the right, her forehead puckers and her mouth tenses into a pained expression. You would look pained, too, if your beautiful hair was transforming into a terrible turban of serpents that would petrify all-comers. And that’s the point. That is what this show is about: the shift in European art from the divine and ideal to the human and emotionally real. 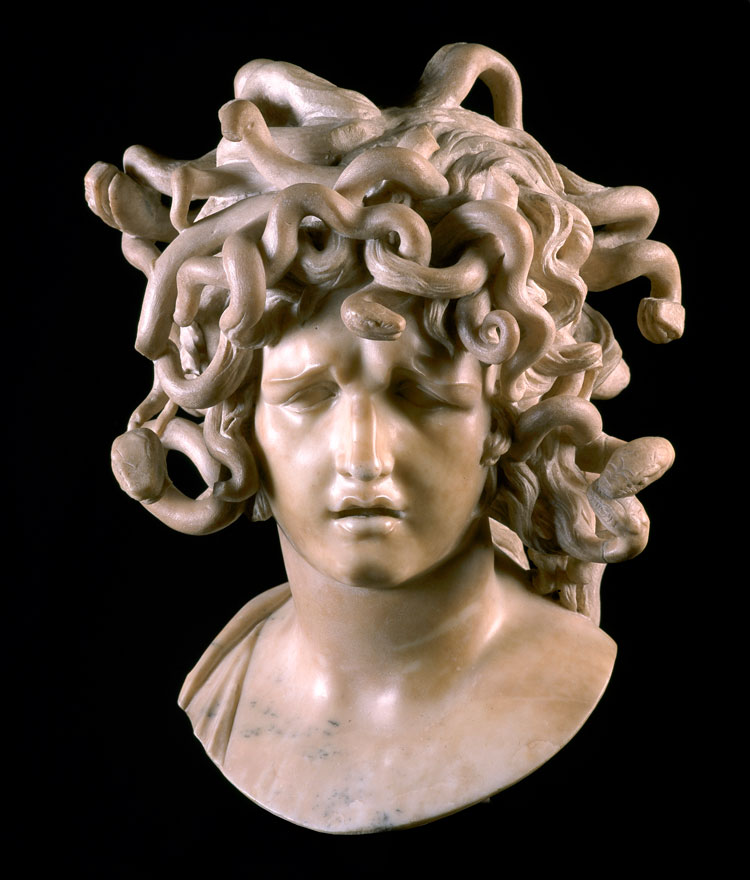 It happened around the turn of the 17th century in Rome. The Roman Catholic church, spooked by the rise of Protestantism, had decided that, to retain and win back its flock, it needed to appeal to them directly, personally and emotionally. The Counter-Reformation needed a different kind of art, and there soon emerged two exceptional practitioners – first, the painter Michelangelo Merisi da Caravaggio (1571-1610), then the sculptor (and architect) Gian Lorenzo Bernini (1598-1680). Others contributed, of course, but there is little doubt that these two men were the standout artistic force behind the beginning of what we now call “the baroque”.

There is nothing in this show that is baroque in the English vernacular sense of the word, nothing over-ornamented. As Anthony Blunt says in Some Uses and Misuses of the Terms Baroque and Rococo as Applied to Architecture, the word baroque “has been applied to so many different types of works of art that it is hardly too much to say that no two art historians have given it exactly the same meaning”. So let’s be clear, this show covers roughly the first 40 years of the 17th century and is about the arrival of art that broke the fourth wall, brought drama, motion, asymmetry, contrasts of light and dark, and a new psychological intensity to both religious and secular art.

Along with Medusa in the first room is just one other work: Caravaggio’s near-perfect Narcissus (1600, its once-questioned attribution now firmly approved by the Rijksmuseum). It is an apt image to be placed across from Bernini’s work. Franco Mormando, in his biography of the artist, described him, perhaps spoiled by his years as a child prodigy, as “a ferocious narcissist”.

Although this exhibition, perhaps thankfully, does not delve into the characters of its two key artists, they had something in common other than artistic genius and superstar status. Both were famously incapable of controlling their own emotions and their responses to them. Caravaggio fled Rome in 1606 after killing a man, and was on the run again two years later following another violent brawl. He is said to have slashed the face of a woman who would not sleep with him, and was himself similarly attacked a year before his death. Bernini, meanwhile, had an intense affair with Costanza Bonarelli, the wife of one of his assistants, and when he discovered she was also sleeping with his younger brother, sent a servant to cut her face with a razor.

Neither man would have lasted long in a time and place less flexible with the rule of law, but early 17th-century Rome was a teeming, colourful, dangerous place, where the patronage of popes and aristocracy (often the same men) counted for more than merely money. 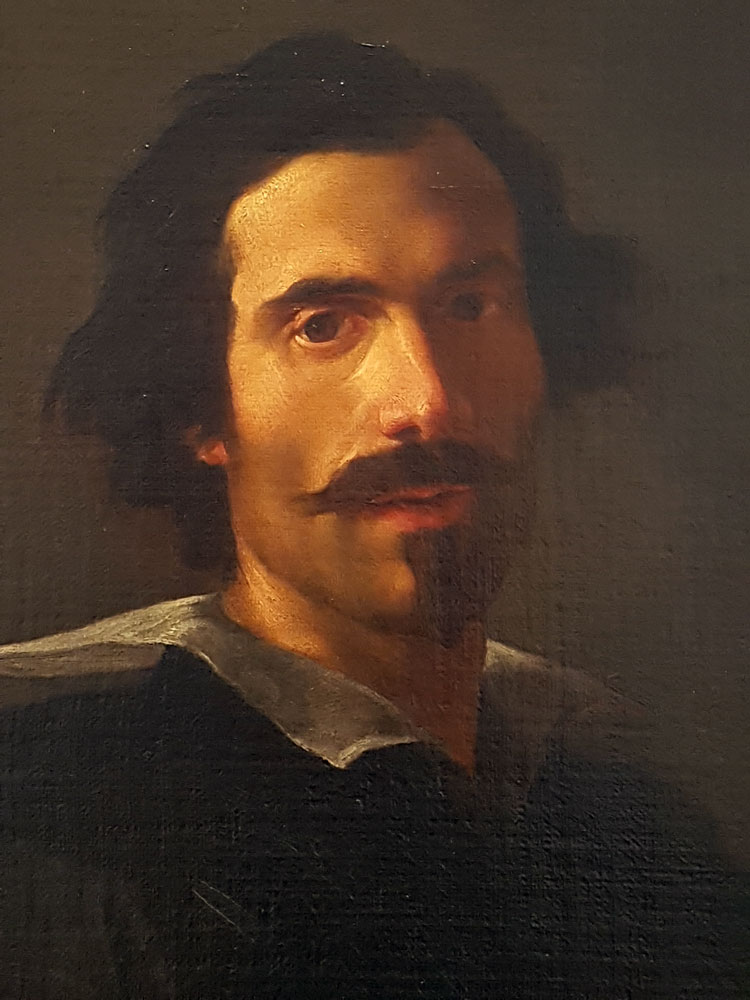 Caravaggio and Bernini’s penchant for emotional eruption does not seem to have made them, let alone their victims, happy (the only self-portrait in this show, an accomplished painting by Bernini, has a haunted, hunted look). But it may have contributed to their exceptional ability to create strikingly credible scenes of violence and intense evocations of human emotion. Indeed, art historian and Bernini biographer Charles Avery, having examined a Bernini bust of Costanza in the Bargello in Florence (a bust that remained in the artist’s home until his death), has suggested that the Medusa (probably also retained by Bernini) may be modelled on her.

Standing to the right of it now, I see another similarity, to the puckered brow and pursed lips of Caravaggio’s Boy Bitten By a Lizard, which hangs in room two, an early (1597-8) capture of a moment of sudden pain. Bernini may, of course, also have been influenced by Caravaggio’s own Medusa (not in this show).

The two “barockstars” (as they were labelled by Vienna’s Kunsthistoriches Museum, co-producer of this exhibition) never met in person. Bernini arrived in Rome as a child with his parents in the year Caravaggio left. But Bernini certainly saw the revolutionary work of the older artist – and was strongly influenced by it. So were many other artists, including several represented here: Valentin de Boulogne (whose brooding David looks intently over the severed head of Goliath), Giovanni Baglione, Guido Reni, Mattia Preti, Andrea Sacchi (with an emotionally charged Daedalus and Icarus) and father and daughter Orazio and Artemisia Gentileschi. 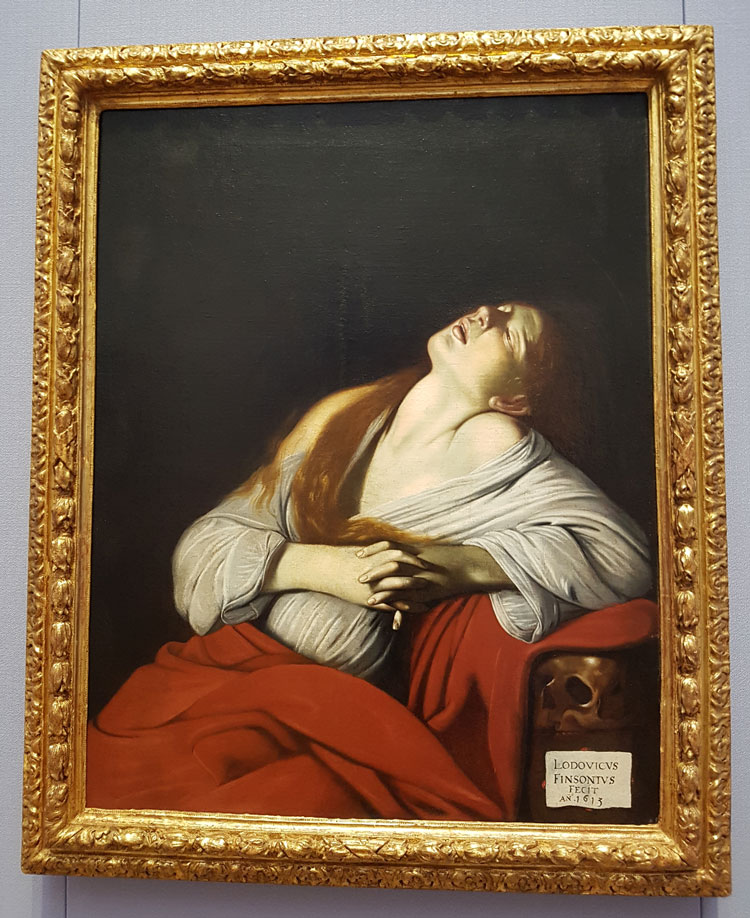 Artemisia’s Mary Magdalene in Ecstasy (coming to London for the National Gallery monographic exhibition 4 April – 26 July) is a remarkable painting of an entirely human saint: head back, blouse off her shoulder, long lush curling hair, arms around her knees. There are no angels, no saintly attributes, just a very real woman.

Next to this picture hangs a 1613 Louis Finson copy of a lost Caravaggio of the same subject. It is not the greatest copy (there is a better one, but the owners would lend it only if the painting were shown as a Caravaggio, which the Rijksmuseum was rightly unwilling to do), but it is an interesting proxy for the original likely to have inspired the younger, female, artist.

It inspired Bernini, too. His most famous work, the similarly posed (but marble) Ecstasy of St Teresa in the Cornaro Chapel of the church of Santa Maria della Vittoria in Rome, caused a (positive) sensation in its day. Dismissed by the art historian Jacob Burckhardt in the 19th century as “too sexy to be sacred”, it is now recognised as the peak of baroque sculpture. St Teresa exemplifies Bernini’s transformation of stone into flesh and emotion, his “living marble”, and the baroque era’s merging of divine and earthly ecstasy. 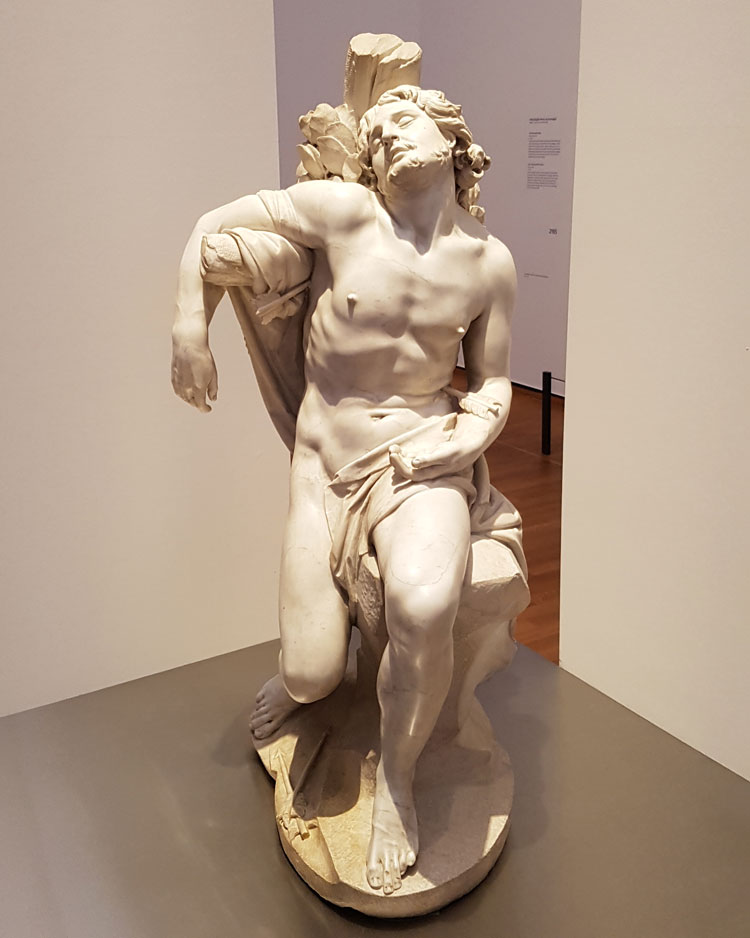 Needless to say, it cannot be in this exhibition, but Bernini’s St Sebastian – probably his earliest independent work, made when he was just 19 – gives a taste of things to come, and suggests another connection to Caravaggio through his sensual St John the Baptist (1602). We find Sebastian semi-seated, draped over the tree of his attempted execution, his flesh palpable, his idealised masculine body sensuous even so close to death. This is the moment he is found by St Irene and other women – and we are those women.

The Baroque’s breaking of the fourth wall is well represented here. Caravaggio’s The Crowning with Thorns (1603) draws us in compositionally. The whole image is so claustrophobic that the viewer is brought right up close to the action. We are witnesses, standing beside the soldier (in roughly contemporary dress) who watches from the left foreground, leaving us an uninterrupted view of the brightly lit horizontal neck and nude torso of the attacked Christ.

Lo Spadarino’s Christ Displaying his Wounds (1625-35) pulls us in equally dramatically, but in a different way. The figure of Jesus stands alone, uncluttered, opening the gash on his torso with his fingers, showing us, challenging us, looking straight into our eyes. We are clearly cast in the role of Doubting Thomas. The exhibition includes three depictions of this biblical moment – hung close together – but this is, for me, by far the most affecting.

It is by “affect” – the historical term for embodied emotion – that the exhibition is divided. Rooms are themed around Horror and Terror, Vivacity, Love, Humour, Passion and Compassion, and so on, but they inevitably overlap to a large degree.

Under Motion and Action, we find Francesco Mochi’s bronzetto of St Veronica (1630-31), an early model for the full-size marble sculpture in St Peter’s. It is a superb, dynamic little bronze of the saint, mouth open in shock and horror, rushing forward, her robes swirling around her. It is one of curator Frits Scholten’s favourite exhibits, and he notes that contemporary commentators described the full-size statue as the saint running from the niche, leaving the viewer standing like a statue in the church watching her go.

The exhibition thankfully gives her plenty of space in which to run. Designed by Italian duo Formafantasma, based in Amsterdam, all 70 exhibits have room to breathe, and visitors are able to stand back as well as lean in. Colour co-ordinated benches are dotted throughout, a welcome aid to longer looking, reading the excellent accompanying catalogue-book, and giving yourself the necessary time to contemplate and be “affected” by the sensual, ecstatic, violent, playful, dynamic, dramatic, intense paintings and sculptures that changed the face of European art.