Brussels Dispatch: A Review of Some Small and Unusual Spaces for Art

A Review of Some Small and Unusual Spaces for Art

Built in 1663, the Brigittine Chapel has survived a bombardment that turned its surroundings to ashes, and altered its use as a market, a prison and a book warehouse, to an elegant and atmospheric space for art and performance. The building is isolated between former factories and a train line, while on the inside, red brick walls covered by flaking plaster and the remnants of baroque decoration stretch up to dark wooden rafters. Parmiggiani has filled the centre of the chapel with a stepped ziggurat (tower) of thousands of books, whose white pages remain mostly closed and unreadable. He has blackened and charred the bottom step of books with flames, reducing the pages to a ruffled ash that coats the floor and discolours the tower's lower part. The effect of this island of silence is remarkable: it suggests all sorts of thoughts, from reflections on mortality rituals (the towers of silence) to fundamentalism (the burning of books) and, in the oppressive volume of unreadable pages, evokes some great cataclysm like the destruction of the Library of Alexandria. It also makes reference to the specific history of the chapel, emphasised by the placing of a huge church bell in front of the tower. In keeping with his earlier work that uses smoke to produce delicate negative images of bodies or objects, the artist's actions are simple gestures with profound resonance, and the meditative space of the chapel shows them to full advantage.

Since 1829, the botanical gardens have suffered many reversals of fortune, the latest of which means this small park is overshadowed by vast office blocks and a busy road that brings the roar of traffic to its green copper statues and low hedges. Sitting at the head of the park are the botanical buildings themselves, a series of interconnected spaces that, today, host a whole series of concerts, gigs, films and exhibitions. Frédéric Penelle is showing his woodcuts, prints and collages in a small gallery space above the Botanique's café, accessed through the glasshouses, the narrow corridors of which are filled with slightly dilapidated palms and shallow geometric pools graced by goldfish. Penelle's work crosses the boundaries between printmaking, collage and assemblage, and the subjects he depicts are similarly hybrid. A surreal mixture of zoomorphic characters and machine parts occupy one whole wall, in a piece that appears to have been put together specifically for the exhibition. Its icons, whose components have been sourced from old encyclopaedias, include rabbit skeletons, swans, dragons, butterflies that emerge from a girl's eyes, a peacock-headed person in flowing robes, a two-headed werewolf and birds' heads that grow from metal boxes. The prints have been cut out and stuck to the wall in a three-dimensional pattern that includes found objects such as cages, briefcases, dentures and an old telephone. The artist claims Max Ernst as an influence,1 but the monstrous machine is also reminiscent of Terry Gilliam's Monty Python cartoons in its use of old illustrations and surreal humour. Other independent pieces are shown in ornate frames that also seem to have been sourced from junk shops: these make greater use of colour and are more restrained in their movements than the sprawling machine that occupies the gallery's longest wall. On the back wall, four large woodcut blocks are exhibited, carved then painted in black, white and grey.

Wang Du is a Chinese artist who has lived and worked in Paris since 1990. This exhibition sees him continuing his critique of mass media, with large sculptures in white bronze of balled-up newspaper pages. In the gallery these are interspersed with model rockets, made out of rolled-up newspapers and stuck upright in resin, ready for launch. The bronze sculptures themselves are perfectly scaled-up versions of crumpled pages, with the newsprint engraved into the surface. Fragments of sense still remain: on 'International', you can pick out references to the West Bank and Iraq and the phrase 'missiles into'. On 'Culture & More', set in the gallery's small garden, the name of Marina Tsvetaeva is visible. Even more visually interesting are the scrambled lines of share prices that cover the whole surface of one of the 'Business' pieces. The symbolic crushing of the news seems to enact a sort of revenge or redressing, but these sculptures make another point too, one reinforced by the newspaper rockets: if you were to fling these hefty, waist-high pieces as you would a newspaper ball, you could inflict serious damage. The impact of the media made concrete. Wang's political satire seems to be heading in a more lyrical direction though, compared to his earlier cartoon-influenced sculptures in resin. The contours of the bronzes seem connected to the traditional use of distinctively shaped rocks in Chinese landscaping, an inheritance also drawn on by the artist, Zhan Wang, with his 'artificial rock' sculptures.

Institutional critique is presumably forbidden in this gallery at the back of the hyper-expensive Hermès boutique: if art has a purpose here, it is to elevate the status of the sponsors. Kersalé's work with light and optics seems to fit the bill: it parallels modern advertising, in that it alters effect without making any definite falsifiable claims. He has installed sheets of plastic printed with a sheen of colours, one of which rises to a pyramidal peak beneath the glass roof, and another of which describes a bulbous half-sphere, dropping almost to head height. The sheets alter the light and reflect the metal struts of the skylight in unexpected ways, while speakers relay the sound of waves and a long screen pulses with patches of light and darkness. The clothes shop is obviously impressed with Kersalé's ability to transform the public perception of spaces, such as Bangkok and Chicago's airports, and the Sony Centre in Berlin: it has also commissioned an installation and a permanent lighting scheme for its Singapore store.

Sorry We're Closed is a glass-fronted cube that is 'open' 24 hours a day, in that the single work of art it showcases is visible both day and night. It occupies a small frontage on the road leading from the Palace of Justice to the Royal Palace - a cheeky insertion into the arterial routes of power. It is currently showing Berlanger's 'Observatoire': a painting of owls, white on a black background, arranged and numbered as if taken from a plate in a book of birds. By altering the context and presentation of the owls, Berlanger has upset the conventions of natural history study and made the vitrine into something of a two-way observatory. His birds, crammed together as on the page, now stare back at the viewer, symbols of wisdom or the uncanny that challenge the passer-by. 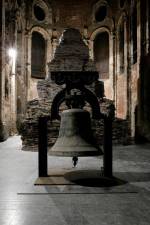 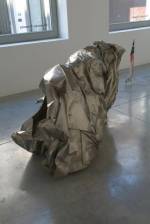 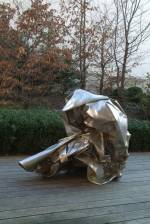 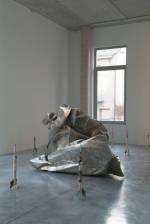 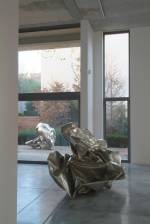 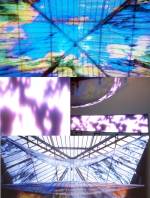