William Scott (1913-89) enjoyed a long and highly successful creative life and, in the opinion of some commentators on British art, he was the most significant painter of his generation. This scholarly and sensitive publication is therefore timely.

Scott's origins are complex. The son of a Scottish mother and an Irish house painter, he was born in Scotland. As a child he moved with his family to Belfast and after studying art there, he relocated to London, where he attended the RA Schools. It was here that he first studied sculpture and subsequently, painting. His early artistic personality was influenced and shaped by many sources, including continental Modernism in the form of Matisse, Picasso and Modigliani, and by new painting emerging from the USA. This cocktail of influences also included some peculiarly personal encounters, such as the naive imagery of Alfred Wallis and the over-arching influence of British Modernist art theory, in the form of Roger Fry and Clive Bell. These influences all appear to have left some trace upon his creative trajectory.

To most people familiar with 20th century British painting, Scott's name will bring to mind a domestic still life; frying pans, mugs, fish and vegetables, rendered in a highly abstracted manner and set down in broad areas of resonant colour. Although the subject matter is identifiable, the forms are often simplified and schematic, providing no more than a convenient motif upon which to hang an examination of light, colour, form and pigment. Scott also produced a substantial number of paintings which could be described as uncompromisingly abstract, in the sense that no objective stimulus can be identified. Perhaps a benefit of those abstracted works, in which the motif is still discernible, is that they shut off the possibility, and the risk, of completely irrelevant and misleading interpretations - the spectator can immediately set aside the issue of representation and attend to the real subject of the picture: colour, form and texture.

His occasional treatment of the female nude often brings a powerful, subjective charge to his painting, which is absent (and probably avoided) in most of his other work. His nudes hint at a suppressed eroticism, often reinforced by a more intense chromatic range of fierce reds and icy blues.

Norbert Lynton's book is thorough, sensitive and scholarly; a fitting literary monument to this powerful and influential painter. The quality of printing and reproduction is excellent, with gratifyingly few examples of the artist's work spread over a double page - a defect which blights many otherwise excellent publications. 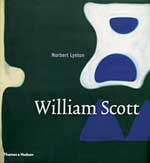