As the tide of Postmodernism in architecture recedes now and is lapped by 'Alter-modernism', islets of post-war modernism remain environmentally intact. Few if any of the high priests of postmodernism stopped off in Malta (although Le Corbusier is documented as having visited and sketched in Gozo in the 1930s): a great modernist opportunity was missed in fact by the island’s government and leadership which could not be salvaged in the post-Independence years. From the cultural seam of colonialism some genuinely modern buildings by fairly prominent British architects like Austin-Smith, Salmon, Lord, and others did emerge. The outstanding historian Quentin Hughes late Professor at Liverpool University had published two full documentations of Maltese Baroque Architecture and twentieth century military architecture, but this depth of focus was an isolated incident.

Julio Lafuente designed for himself a well-articulated villa on the island of Gozo, never executed: the artist Victor Pasmore designed his own house and studio on Malta: and Sir Basil Spence created for himself a masterly, and small –scale sanctuary carved into a Cliffside rock facing out to the sacred island of Filfla. Austin-Smith designed an elegant set of army married quarters, now abandoned by the military and decaying fast. Malta teetered on the brink of recognising good modern design. The entirely indigenous Maltese practice of Edwin England Sant Fournier (1908-1969) and his son Richard, practising as England and England took up the challenge with a masterly showroom at Sliema, elegant in its articulated structure (1967). Richard England continued subsequently in sole practice, having trained under Gio Ponti in Italy. It was Ponti who gave England the confidence to design the dramatic hillside church of St Joseph, Manikata, fulfilling the latest Vatican edicts (1962–74). This incorporated the revisions in liturgy and spatial denomination in a new and revolutionary manner and rapidly became internationally renowned. It both reflected ancient agrarian store buildings and also incorporated something of the profile of a surfaced U-boat conning tower. Minus a campanile, it instead incorporated the cross on the side of this core, perhaps a reminder of Malta’s wartime experiences.

Following this efflorescence of talent there was an overlay of commercial building for tourism, which overlaid the l950s buildings that still remained. After the 1970s there came, predictably, the full flood of tourist building, but there is little sign of any enlightened governmental or institutional commissioning. The building of the University of Malta was a further missed opportunity to create a cultural pointer after independence as an indicator for a new generation of young Maltese students. Given the remarkable wealth of medieval and baroque indigenous architecture created on the island by the Knights of Malta, based there for several hundred years after they had been forced to leave Rhodes, it is a cautionary tale how little opportunity was taken in driving the new architecture of Malta forward into the twentieth century. Only the talent of Richard England, it can be said, put Malta back on the architectural map where she should belong. There is still some time left to amend this prognosis, and also to apply locally a finer degree of discretion over which buildings merit conservation. 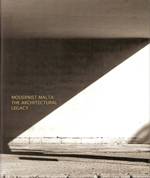