For art students, the graduation show can be a fraught affair, with a lack of space and last-minute disasters conspiring against what ought to be a moment of triumph. For the viewer, these shows can be something of a mixed bag, with occasionally inspired and accomplished work hiding among the less than brilliant. 'New Contemporaries' aims to improve the situation for all concerned by putting on an annual, professionally selected exhibition of the best that the UK's art schools have to offer. 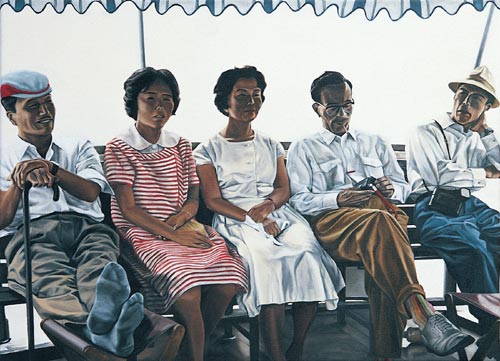 Any final year or just-graduated Fine Art student in Britain is eligible to submit their work to a panel of selectors, who typically choose around 30 artists to take part in the show. With over 1,200 entries to choose from, the selectors' role is clearly crucial, and was this year performed by Jeremy Akerman, Phil Collins, and Jane and Louise Wilson. All four artists are 'New Contemporaries' alumni, along with such established names as Damien Hirst, Chris Ofili, Tacita Dean and Gillian Wearing. So, although Akerman makes a point of saying that this 'isn't another make-over show where a person suddenly gets to play artist, nor is it about greatest art hits of 2005',1 the selected few are clearly going to attract some attention. The show has already been to Cornerhouse in Manchester, LOT & Spike Island in Bristol, and it is now is at the Barbican Centre's Curve Gallery until the New Year.

A large proportion of the work on show is photography, film or video, although whether this is due to the preferred practices of the selectors or to a predominant trend in UK schools, is difficult to say. It might simply be the case that proficiency in such (relatively) new and technology-based forms comes sooner than in the traditional ones of painting and sculpture, so a greater proportion of the submissions seem to be more technically achieved. Whether or not they have any decent content is, of course, another question entirely.

If anything of the zeitgeist can be observed in the exhibition, the vogue for documentary art is very much alive. Irish photographic artist, Richard Mosse's large photographic prints of destroyed buildings make for striking images on the first wall of the gallery; winter fields seen through the hole of a shelled church in Kosovo and the exposed interior of an earthquake-ruined school in Bam are among the pictures imbued with a mixed sense of desolation and lyricism. The photographs seem less concerned with the events themselves, and more with the architecture that destruction leaves behind. In 'Untitled (Bosnia)', a shelled office block stands alone against a stormy sky, only the central spine of the staircase remaining. There are no people in the landscape, making it almost possible to forget the human misery that its creation entailed. Only a few years after disaster, the viewer is invited to see these as spaces where poetry is possible. One could see this as a testament to human endurance, or as exploitative of suffering. But perhaps such ethically loaded terms are inappropriate - the responsibility of the artist is only to make the most powerful art they can.

Continuing the documentary theme is Mark Boulos's short film 'The Gates of Damascus'. With no narration and minimal use of explanatory titles, the film plunges us into the extreme religious experiences of Myrna Nazzour, a Syrian Christian woman. In a brief introduction, she talks about how the Virgin appeared to her in a tree near her balcony. The action then shifts to her household's preparations for the Easter weekend: a doctor introduces himself in the living room, and is greeted by a priest who mentions stigmata, oil, and 'the message'. The house become crowded, and cameras proliferate. Attendants weep or pray. The priest pokes his head round a door, and asks people not to crowd. There's nothing in the bedroom, he says in French. The camera takes us into the bedroom, where Myrna is in the throes of religious ecstasy. The abiding image of the film is Nazzour lying in bed, turning and groaning, her face covered in a sheen of oil, with a mass of believers, cameras and videos staring down at her, reflected in a huge mirror behind her pillow. We see shaky footage of the bleeding graze on Nazzour's side, and hear brief comments from her husband and other relatives. We also meet the women of an Iraqi Christian family, who have come to have their baby daughter cured of paralysis. They believe Myrna to be a saint, having seen films about her.

With its hand-held camera and talking-head interviews, the film uses a familiar documentary template. But Boulos doesn't elaborate, leaving us in the dark about Nazzour's life history, the fate of the baby girl and the doctor's opinion of the stigmata. The emphasis is on the experience itself, and on the voyeurism of the crowds and, by extension, the viewer. What is conveyed most strongly is an atmosphere of panicky fervour and the unknowable nature of what is a holy miracle or mass delusion. It's a powerful piece of filmmaking that invites questions about the representation of religious experience.

Just as unsettling is Erica Eyres' video 'Playing Dead', a four-minute 'interview' with a woman, played by the artist, who dedicates her life to faking her own suicide. She admits that her ultimate aim of her 'art' is to take her own life, but claims she's not ready for the commitment of death, and sits in a bathtub with fake blood daubed over her ruined wrists. This is satire at its most uncomfortable, because it's so believable, particularly when set among other non-parodic documentary work.

Other photographers working in an ethnographic vein include Anne Kathrin Greiner, whose prints from the series 'Wa' are slight depictions of the landscape of suburban Japan, and Payam Sharifi, who gives us the interior of two gypsies' houses in Poland: a humble flat lived in by a Romany family, and the kitsch fairytale of a gypsy king's mansion, bought up by a non-gypsy businessman.

Not all of the work in the show is of a high standard. There are problems of technique, most notably among the painters, though the sound quality of Katie Davies' video leaves something to be desired. Even Hideko Inoue and Chris Smith, who are the most technically assured of the painters, tend towards photo-realism in a way that suggests a lack of faith in paint as an expressive medium. I was also unconvinced by Giles Perry's videos that purport to record earthquakes happening in London – their abrupt shaking is nothing like any earthquake I've ever experienced, although I'm not claiming absolute authority on the matter.

However, as compensation, two artists have produced interesting work in the sometimes under-represented areas of printing and embroidery. Nelson Crespo is showing woodcuts, screen prints and lithographs based on pages of his passport and other official markers of identity, while Craig Coulthard has made banners from felt. These latter draw on the folk tradition of church standards to commemorate abandoned kirks in Fife, Scotland. They mix enigmatic symbols with more obvious religious ones in an intriguing heraldic display.

Social and political themes recur throughout the show, and are especially evident in the work of Stuart McCaffer and Beltran Obregon. McCaffer has recreated a small prison cell in polystyrene bricks, painted in grey and cream to make it look as if the genuine article has been uprooted and brought to the gallery. Inside the 'steel' door, two narrow beds and a smattering of personal possessions complete the feeling of incarceration. A video screen is set into the small barred window, playing grainy home-video footage of children or marriages, interspersed with long shots of fields and trees. While the video work is a bit clichéd, the installation creates a genuinely claustrophobic atmosphere. Obregon, meanwhile, has also produced a prison-based work, a series of projected slides entitled 'Gazing at Heaven'. The photos look directly downwards onto basketball courts, rows of washing, the abstract or unfocused patterns of corrugated and pantile roofs. Often, small figures are looking back up. Gradually, you realise that he has attached the camera to a small host of balloons, whose shadow is sometimes visible on the ground. However, the work takes on a deeper resonance if you know that the balloons have been floating over Colombian prisons - something I was only able to find out later.

Not all the pieces are political, however. Clive Murphy's inflatable cardboard boxes are just that: containers for jasmine tea, motor oil and office supplies filled with air and plugged to create strange hybrid pillows. Their titles might be taken from pop songs - 'I'm A Slave 4 U', 'You Drive Me Crazy' - but this matters less than their humorous physicality. Takahiro Iwasaki's installation is equally inventive. He has made tiny, fragile telegraph masts from pencil leads and thread, and connected them over a few metres of floor space. In between the crossing lines, hewn erasers have been laid out in spare geometric patterns. The piece achieves a surprising effect through the disorienting effect of its small scale, as an architectural model of a sculpture-filled landscape.

Inevitably, not all of the art is as exciting or as proficient as you might hope, but it can take a lifetime to become an accomplished artist, and it would be unreasonable to expect students just out of college to hit the mark every time. The exhibition's biggest failing is that it does such a bad job of providing any sort of context or explanation for the work. Akerman correctly observes that artists 'need critical dialogue and, very often, leaving college means the end of the discussion'.2 Given this, and the 'New Contemporaries' claim to be a professional platform for young artists, it is disappointing that neither the exhibition, nor the catalogue, provide such a critical forum. 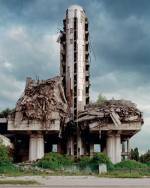