Barbara Kruger, American artist and political activist, is exhibiting in Scotland for the first time, contributing to the 'Rule of Thumb: Contemporary Art and Human Rights' programme of exhibitions, workshops and events that confront the exploitation of women. Her exhibition at the Gallery of Modern Art in Glasgow features an installation that fills the whole of Gallery 4 - the floor, columns and skylight windows - with enlarged newspaper articles and slogans. In an interview with Amnesty International early in 2005, Kruger commented:

I try to address notions of power and how they make us look and feel: how they dictate our futures and our past. How power is threaded through culture impacts both men and women. We all live in a world constructed through the dense machinations of trade and expenditure, of pleasure and desire, of labour and wages. I think that pictures and words have the power to make us rich or poor. I try to engage that power using methods that are both seductive and critical.


Barbara Kruger was born in Newark, New Jersey, in 1945. She attended the Syracuse College of Visual and Performing Arts, before studying under Diane Arbus at Parsons School of Design in New York, emerging out of the New York art scene in the 1970s. Kruger's ideals and methods are reminiscent of the Guerrilla Girls - albeit in a less radical form - but her work is not new. It is perhaps even passé; but this may be a response to a political and social situation that has changed little in the past few decades and whose particular issues are still relevant. The exhibition effectively communicates the extent of domestic abuse, prostitution and general exploitation of women in contemporary society. This aspect of her work appears to be socially conscientious and compassionate, but it is only one side of a paradox. Although the exhibition does not show a large amount of Kruger's work - it is a single installation rather than a retrospective - it does give access to the artist's other work through a well-stocked gallery shop. In fact, her work is suitable gift shop material; her pictures reproduce well, and her puns are entertaining. The concern is that there is little to distinguish between Kruger's work, which has been exhibited in the Tate Gallery in London and the Museum of Modern Art in New York, and the comic retro kitsch to be found universally in pretty gift shops. Kruger's work, tinged with politics for sincerity, sells well - but has Barbara sold out?

As with many Pop artists, Kruger has a background in advertising. She began her career working for Mademoiselle magazine and uses such techniques to publicise her cause. As well as the visual arts, Kruger writes essays and articles and a collection of these entitled Remote Control: Power, Cultures, and the World of Appearances is for sale, giving an insight into the artist's concerns and political orientation. Although of honourable intention, displaying a clear drive for social reform and cultural liberation, her writing is reminiscent of American film-maker Michael Moore's book, Dude, Where's My Country? when she comments:


In a society rife with purported information, we know that words have power, but usually when they don't mean anything ... This concerted attempt to erase the responsibilities of thought and volition from our daily lives has produced a nation of couched-out softies, easily riled up by the most cynically vacuous sloganeering and handily manipulated by the alibis of 'morality' and false patriotism. To put it bluntly, no one's home. We are literally absent from our own present.

Kruger attempts to solve the apparent lack of perception in modern society by facing the viewer with outsize slogans splashed across photographs; if people do not notice statistics about domestic violence in newspapers, then perhaps they will if they are blown-up and pasted onto billboards. It is the same concept used by Michael Moore, whose films Bowling for Columbine and Fahrenheit 911 were shown in cinemas globally. Similarly, Kruger fights against a selective media with media of her own that is bigger, more colourful and in residence in a large city for six months. She is using art for activism, just as Moore used cinema to expose the American nightmare. It has become a dirty game.

Hidden somewhere amid the metre-long letters there must be some small print - the art world's fee for giving political activism space to advertise - as in this otherwise reputable and refreshing art gallery, there is no art in Gallery 4. There is a gift shop where you can buy a T-shirt with the - ironic? - slogan, 'I shop therefore I am', but there is little original substance here to balance the style. In imitation of Barbara Kruger, I quote The Strokes: 'Is this it?' 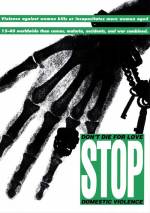 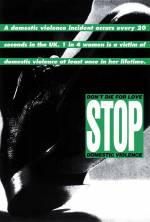 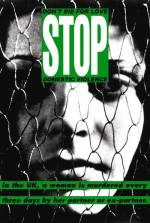