Aztecs at the Royal Academy

The Aztec exhibition at the Royal Academy opened on 16 November and will run until 11 April 2003. This is a large, ground-breaking exhibition bringing together 380 works, in a similar vein as the Tutankhamen show of the 1970s or the Africa exhibition of 1995. Devoted to the cultural riches of Mexico's Aztec this is the most comprehensive survey of their culture ever mounted, and one of the most ambitious exhibitions ever staged at the Royal Academy.

Many remarkable works on show here have never previously been exhibited outside Mexico. The catalogue features some 500 images, including 380 objects illustrated in full colour. Each catalogue entry is accompanied with a scholarly text by leading authorities from over 65 lending institutions. The catalogue, which is the most ambitious publication ever produced by the Royal Academy, forms a comprehensive survey of Aztec culture. Nine essays by leading Mexican, European and American scholars explore key themes of Aztec culture including the importance of the cosmos, the role of the different gods, the issue of kinship, the culture of war and human sacrifice as part of the cycle of life and death and the natural world.

The Royal Academy has entered into the spirit of cultural exploration by offering a Mexican season of events - a diverse programme of events: lunchtime and evening talks and events, study sessions, Latin American musical evenings and on 14 February, Mambo dance classes to celebrate Mexico's day of Love and Friendship, and a one-day celebration of chocolate on the grounds that Aztecs revered chocolate - as a drink, medicinally, gastronomically. It had both cultural and economic significance being used in religious ceremonies and as currency. One of the evening lectures in January Time in the Sun (10.01.03) will show original film footage by Russian film director Sergei Eisenstein, who in 1930 went to Mexico to make a film about the native Mexicans, and the effect the Spanish conquest had on their indigenous culture. The film Que Viva Mexico was never finished but original footage has been edited by Marie Seton.

Towards the end of the exhibition and the series of wide-ranging lectures and events, there will be a two-day symposium, the first symposium devoted exclusively to Aztec culture ever to be held in Britain. It will bring together distinguished international scholars from Mexico, the US and Europe.

The Aztec exhibition is a cultural blockbuster with something for everyone. The children's programme is particularly good, perhaps focusing on aesthetics and the exotic and amazing aspects of the show: fabulous mosaic masks, incredible gold objects. The education programme connects with the National Curriculum - guide books, art sets, puppet making and interactive sessions exploring Aztec culture and folklore. To coincide with the Royal Academy exhibition, Prestel Publishers has produced The Secret World of the Aztecs, as part of their Adventures in Art series for children over the age of eight. The series is perhaps the best set of books for this age group, offering an accessible and creative introduction to individual artists (see Paul Klee on this website). The Secret World of the Aztecs is no exception: beautiful illustrations of clothing, jewellery, religious idols, are all in full colour. This is an accessible and interesting book for young readers. The author, archaeologist and scholar, Ferdinand Anton is the author of several books on pre-Columbian art. The book describes all aspects of Aztec life: the Aztec Calendar, Nature, Religion, and Aztec children. Illustrated too, are the series of paintings by Diego Rivera in 1946 for Mexico's National Palace, as well as photographs of archaeological sites. This is a splendid companion to the Royal Academy show and manages to avert the child's gaze from the truly grotesque and demonic aspects of Aztec culture

Aztecs at the Royal Academy examines the art and culture of a remarkable civilisation. According to legend, the Aztecs would find their homeland where they saw an eagle sitting on a cactus with a snake in his beak. They found him on a marshy island in the middle of Texoco Lake. There they made houses and their first small temple, calling the place Tenochtitlan. In less than 150 years, they had built over 70,000 temples, palaces, houses and other buildings. The Aztecs rose to power in 1325 and came to dominate central Mexico until 1521. Their impressive culture is characterised by fine arts, poetry, philosophy and literature. Contact with Europe brought the empire to an abrupt end in the early sixteenth century, when the Spanish conquistador Hernán Cortés arrived and destroyed the city. The main part of the exhibition is devoted to the city of Tenochtitlan - the present Mexico City - before the arrival of the Spanish in 1519.

Tenochtitlan, which had been founded in 1325 "the place of the stone cactus", in 1520 had a population of 250,000. It was a grand city dominated by vast ceremonial stone buildings and divided by canals and joined to the mainland by four causeways. In terms of physical splendour and standard of living, Tenochtitlan was advanced: markets, high standards of food production, schools, military prowess. It was a well-ordered society where art was highly symbolic and played an important role in the religious beliefs of the state. The Aztec religion was a seminal part of day to day life. Tenochtitlan was a city of great riches; it was a symbol of the power of the Aztec Empire. The largest gallery at the Royal Academy is dedicated to the Templo Mayor, the hugely important heart of the Aztec universe, where the various forces of their cosmos met.

In 1325, the god Huitzilopochtli ordered the construction of the city of Tenochtitlan. It was divided into two areas: the sacred and the profane.

Aztec culture absorbed aspects of previous regional cultures, in particular the Teotihuacan (AD 1-750) and Tula (AD 900-1200). The Aztecs, for example, claimed the trade networks of the former cultures, as well as aspects from their architecture and art, gods and calendar. Cleverly assimilating these styles and practices, the Aztecs created their own distinctive style. For a society that produced so many remarkable works of art, there is little documentation to indicate how the Aztecs actually viewed art in their society. Miguel Covarrubias states,

Monumentality characterises Aztec sculpture. The sheer weight - both physical and symbolic - is a strong feature of the works on display. So too is the importance of art in everyday life: woven mats, ceramic vessels, and in religious rituals: fabulous and grotesque masks. The nobility wore magnificent ornaments and jewels and grand clothes, capes, jaguar skins, tropical feathered headdresses, and gold. In fact after the Spanish Conquest, Aztec artefacts were shipped back to Europe as curiosities. In a 1520 diary of artist Albrecht Dürer, he marvels at the Aztec treasures he saw in Brussels, 'All the days of my life I have seen nothing that so rejoiced my heart as these things, for I have seen among them wonderful works of art'.3 Gold sculptures and ornaments of dogs, monkeys, deer and tigers as well as bows, arrows and crests were made. Exquisite jewellery such as that on show at the Royal Academy formed a central part of Aztec art and culture.

Many gods ruled over all aspects of daily life. A large number of priests acted as intermediaries between human life and that of the gods. Underpinning their religious practise was the belief that the gods had sacrificed themselves in order to create the sun, moon, mankind and maize. In order to sustain the cycles of the sun and moon the Aztecs were obliged to 'feed' the gods with human hearts and blood through the practice of bloodletting and human sacrifice.

One reviewer observed that,

The physical splendour of the carved stone, the scale of many stone artefacts, and the diagrams of the architecture and city plan all contribute to create a vision of a remarkable civilisation. The fact that a fine, clay bowl was used as a container for flayed human skin is overlooked, just as the knives used for gruesome sacrificial purposes were decorated with delicately inlaid turquoise and mother of pearl. Beauty and grandeur in Aztec society dominate the Royal Academy exhibition, but the level of scholarship and comprehensive nature of the superb catalogue leave one in no doubt as to the grotesque and ruthless aspects of Aztec culture and religious practice. 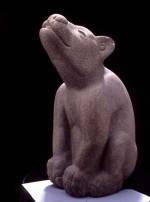 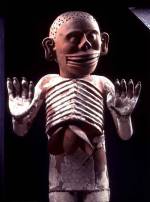 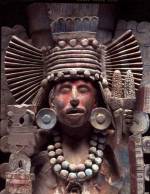 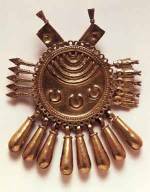