Astronomy Photographer of the Year 2013

Astronomy Photographer of the Year 2013

“… be amazed and fascinated and hungry for more.”
Alan Friedman, exhibitor

This is the fifth Astronomy Photographer of the Year exhibition. When Unesco held its International Year of Astronomy in 2009, the Royal Observatory established its own annual exhibition to celebrate the achievements of the amateur astronomy community.

Dr Marek Kukula, Public Astronomer at the Observatory, explains that advances in astronomy photography were initiated in the 1990s when images from the Hubble telescope: “Revolutionised the quality of astronomical images … and scientists and NASA bosses realised the opportunity to engage the public and build support for space research.” Ten years later, in the early noughties, he says: “Advances in digital camera technology and home computers made it possible for non-specialists to make images in very low light conditions and to digitally process them in ways that had not previously been possible.”

This small, exquisite backlit exhibition of selected images, chosen from more than 1,200 entrants worldwide, includes winners from Australia, China, Hungary, the UK and the USA. It is fitting that this show should be displayed in the Physical Observatory. Built in the 1870s to house new photographic equipment, this observatory is also home to the telescope from Captain James Cook’s first voyage (1768-71) aboard the HMS Endeavour, during which, while in Tahiti in 1769, he observed the transit of Venus across the sun. The contemporary photographic documentations in this exhibition, including Sam Cornwall’s Venus Transit, are surely our current method of exploring the very far beyond and unknown – until the next revolution in space flight can transport us physically across the galaxy. In the words of Plato (428-348 BC), which are quoted along a date line of astronomical thinking and discovery in a neighbouring display at the Observatory: “Astronomy compels the soul to look upwards and leads us from this world to others.” It is also true to say, as Douglas Adams observed in his Hitchhiker’s Guide to the Galaxy: “Space is big. You just won’t believe how vastly, hugely, mind-bogglingly big it is.”

There is not much that isn’t mind-boggling about the observatory and all therein. As soon as you step through the entrance, you are invited to touch the oldest thing you will ever encounter. The Gibeon meteorite1 (on loan from the Natural History Museum), which fell to Earth (in Namibia) in prehistoric times, is around 4.5 billion years old. A black solid lump of iron and nickel approximately 60 x 100cm, strangely smooth and dense to touch, its rounded edges have, since its discovery in 1836, been silvered by a mass of astonished fingers. There is a visual connection between some of the photographic images in the exhibition of deep space and the meteorite. The intensely dense blackness, packed tightly with minute flecks of light that are endless masses of stars, echoes the surface of the meteorite: it looks like the place from which it came.

Each of the photographic images in this exhibition arouses astonishment – in the enormity of distance and size pictured, and also in the breathtaking aesthetics of form, colour and composition. As Ellie Arroway, in the film version of Carl Sagan’s book Contact, exclaims, on encountering “some celestial event” while being transported through deep space: “They should have sent a poet.” 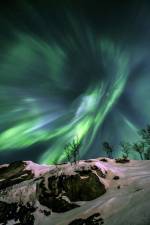