Architecture: Zaha Did It

Architecture: Zaha Did It

The development of architecture specifically for cancer outpatient healthcare has been pioneered in the UK by a group of independent operatives known as the 'Maggie's Centres'. This came about initially as an effect of the personal tragedy of the internationally renowned American architectural writer Charles Jencks, who lost his wife Maggie Keswick to cancer in 1996. Before her illness, which both had fought courageously over some years, Maggie herself had been at the receiving end of grim experiences, waiting in corridors of crowded oncology wards for urgent treatment, sometimes for hours on end. Together, they resolved to do something about the situation.

Maggie, coming from the well-known Keswick Hong Kong banking family, had relations who knew a thing or two about raising finance: since, by then, her treatment was centred in Edinburgh, why not establish a day care centre as a private initiative at the Western General Hospital in Edinburgh? As Maggie's health declined terminally, the project got under way, soon to be christened the 'Maggie's Centre'. The Edinburgh-based architect Richard Murphy was chosen to develop the designs to a very detailed, yet open, brief from Maggie herself with Charles at her side, and a sheltered sanctuary site was developed a short walk from the hospital.

Now, the tenth anniversary of the founding of the first Maggie's Centre has just passed and this has been celebrated in a remarkable way by the establishment of no less than the fifth Maggie's Centre at Kirkcaldy in Fife, Scotland. It so happens that others are planned, with one by Richard Rogers next to Charing Cross Hospital in London, one still unsited at Addenbrooke's in Cambridge by Daniel Libeskind, one planned by Chris Wilkinson of Wilkinson Eyre for Oxford's Radcliffe Infirmary, one by the Japanese architect Kisho Kurokawa in South Wales and others are in the pipeline. Until this year, the superb Maggie's Centre at Dundee's Ninewells Hospital, designed by Frank Gehry, has been the star performance. The other centres that currently make up the first five all happen to be in Scotland. One at Inverness by Page and Park Architects recently won Scotland's equivalent of the Stirling Award for Architecture, the Andrew Doolan Award, with a prize of £25,000 in a sharply competitive field. The same architects have designed the Glasgow Maggie's Centre. The list is growing.

Some may think that the use of 'signature' architects makes for an unwarranted blaze of publicity for such a painful healthcare preoccupation; but, the fact is that in virtually every case, the fees have been waived by the architects for each centre. Budgets have been very tight, with finance significantly raised from the public locally. Landscaping is perceived to be an essential 'provision' for the centres in varying degrees according to site and context, but the policy has had to be expedient. Charles Jencks has deployed his other professional skill as a landscape designer in the case of the Inverness Maggie's Centre. Eelco Hooftman of Gross Max had to step back at Kirkcaldy, where the budget for landscaping work was cut. Fortunately, the site has undeniable natural advantages and this has helped.

If we now look at the progress and success of the Dundee Maggie's Centre, designed by the architect Frank Gehry, it is a dramatic vindication of the choices and decisions made by the Maggie's board. Dundee University's Fionn Stevenson, Michael Spens (an oncology outpatient himself) and St Andrews' University Professor of Psychiatry Gerry Humphris, formed the steering group for a post-occupation evaluation of the effects of a two-year period of operation and found that both patient and staff response and performance were well up to original expectations. Following on from the core idea of the 'kitchen table' provision, around which in a domestic pattern users can gather for coffee, tea, biscuits and discussion with each other, Gehry had designed this as the 'centre' of the Centre. The space looks out across the Tay estuary to the hills beyond, in a remarkable spectrum of changing light. Gehry has produced a sublime spatial symphony here, linking interior and exterior effects harmoniously. Much of the organisation's feedback from Richard Murphy's Edinburgh Maggie's has been proven to work. The whole ethos is about homeliness and interaction between participants without barriers. Significantly, there is no reception desk at the entrance. You just walk in from the green-swathed car park outside and reach for a mug of coffee or tea, sitting down congenially at the table. Tea and coffee don't last forever, but around the corner is a small, well-stocked library about cancer itself in all its perplexing variants, and up a spiral staircase is a more private communal sitting space with the same magnificent view of natural landscape. The miraculous thing is that everything is provided at no cost to the users - the very essence of the ethos of this charity.

The new Maggie's Centre at Kirkcaldy was designed by Iraqi-born architect, Zaha Hadid. Hadid is, like Gehry, a recipient of the Pritzker Award previously, the so-called architectural Nobel Prize. This brand new Maggie's Centre has not been open for more than two months and Studio International will review the work in detail during February 2007. Suffice it to say at this stage that it is a jewel-like insertion below the multi-storey hospital block to which it is linked oncologically. Hadid has deployed original materials in a wholly contemporary way. In the current issue of Architecture Today, Richard Murphy claims that it is beautiful but flawed. The jury, and the centre's users, may still be 'out' in this dramatic development in the home constituency of the British Chancellor of the Exchequer, Gordon Brown, but it marks a worthy tenth anniversary for the Maggie's Centres as a whole. With Frank Gehry's Dundee building there is now a clear pointer for the organisation in terms of its future policies, fundraising, and broader dispositions - and hopefully a direct marker for the future of an architecture of healthcare, especially where the urgent provision of outpatient care is concerned. 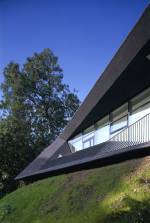 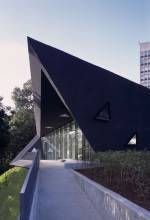