His curious characters from the imagination can be seen to enact private rituals. The most recent body of work (painting, drawing and etching), which has been made over the past two years is essentially autobiographical, yet he is reluctant to allow himself to be defined by the poignant images, such as Departure Day (2011), referring inevitably to his wife's illness and death. Clear evidence of the sombre episodes exist side by side with images, such as An Amended Promise (2011) and Harmony (2011) that point forward, of the opportunity to commit to a new relationship and the unexpected happiness of that.

In conversation and email interview, Antoniou explained that there is nothing specific to the new body of work, on show in Sydney, other than the fact that, the large drawings are "works completed in the past two years in a day/night formation. They speak of the internal world of the unconscious mind with its enclosed spaces, and the more surreal content; and the day themes that tend towards a depiction of 'another world', a kind of modern mythological place, an idyll, as it were. I tend not to work to too specific a theme, as it can sometimes arrest the more intuitive narrative. I have a tendency to skew the content [if I work like that] to what I think the images should be about in relation to the 'theme' of a show. This runs against my sensibility."1 A number of the new works feel sinister, even threatening, until in fact one sees details, which are humorous. The Night has Begun for example, shows figures wearing head-dresses that include a bird, and a apparently cheerful skeleton in spite of being thrown in the air. Goya's The Straw Manikin, or the folklore of the Mexican Day of the Dead, can be seen as possible influences.

The theatre is central to Antoniou’s art practice, having been a member of the National Theatre in England for many years. In works such as Fortunes Fare (2011) circus performers, masks and animal features are seamlessly included in an overall comment on the world today, on an inherited body of ideas. Following a long period spent involved in theatre, his work is at times classically conceived; other pieces suggest a Shakespearean drama, a comedy of human error. "In a Roomful of Paintings & Elsewhere" - An Appreciation of Andrew Antoniou,” Roger MacDonald observes: “There is a sense of arriving at a theatre late, to find the stage lit, the action urgent, the language pared back, the plot reduced to an almost primal act. The characters who come onto this stage have a feeling of being slightly out of time, wearing approximations of modern dress, as in re-staged Shakespearean fragments, or bits of dramatised Homer. Intensity. They shout, implore, stare, and clutch at an essence of being. They enact fragments of classically conceived. Their actions suggest an Olympiad of the emotions”.2 The enigmatic figures in Antoniou’s theatrical images are however, purposeful – busy and intense – suggesting the struggle at the heart of the human condition.

Antoniou’s work belongs to the tradition of Hieronymous Bosch (1460-1516), William Blake (1757-1827), Max Beckmann (1884-1950) and the Scot, John Bellany (b1942), who taught him at the Winchester School of Art, before he emigrated to Australia. Where Bellany’s art addresses the overbearing religiosity of fishing communities like that of Port Seton, near Edinburgh where he grew up – born of primal issues of survival in the elements, Antoniou’s work possesses a sensibility more attuned to Lewis Carroll’s, (1832-98) Alice’s Adventures in Wonderland, where nonsensical events take place, or the puppet theatres of middle Europe. Like Bellany, however, Antoniou peoples his curious world with composite creatures, part human, part animal with a toy-maker’s quality. A cut out, clockwork style figure is, however, given the sculptural quality of Ferdinand Léger. No single source can be attributed to this, the creation of a surreal and theatrical place. The etchings Light Fantastic (2009) and Music of Madness (2009) refer to the apparent chaos of personal lives, to unexpected and fearful episodes, to the timeless nature of the cycles of life and death. Emotional rebirth as a continuation of loss is in this body of work quietly celebrated.

Memory and imagination are used with an unerring commitment to drawing, which has formed the core of his art practice for over 30 years. He describes that drawing started “as a means to an end, in support of my painting and printmaking, but has become an end in itself and now dominates my art making. In my experience drawing remains the most direct and honest form of image making. It is not disguised by layering and in my practice is unaffected by the excesses of technique allowing the imagery more room to speak of itself. Each drawing develops from preceding drawings and in essence creates a rolling narrative. My relationship with drawing is a complex one and can be likened to that of oneself being part audience, actor, director and playwright. I am both master and slave of this medium. The narrative language I have developed with drawing heightens the symbolism of the work. Repetition adds denseness and creates connection”.3 Antoniou’s scenes, created fastidiously, are laden with metaphor and personal allegory.

Antoniou has been described as an etcher and draughtsman who also paints. “As an image maker he thinks as a printmaker, always working from a matrix and constantly layering his images. He is also an artist who enjoys a sense of grand scale and who is able to instill a grandeur and monumentality into his slightly absurd creations.”4 The charcoal drawings are perhaps his most satisfying images, not only for the quality of the draughtsmanship, and the well-orchestrated dynamism of the picture plane, but in the range achieved from the simple medium. The sculptural quality achieved in the figures and the energy infused into each is varied and masterly. The velvety blacks in the charcoal can also be found in the etchings. The energy achieved in both etchings and drawn images enables Antoniou to present an original message.

Moving from England to Australia, and then to rural Australia has influenced him as an artist on many levels, “in an environment so different from my formative beginnings a vast intramural landscape has developed reflecting a collective of experience from both Southern and Northern hemispheres. This has widened my realm of interpretation”.5

His drawing education began at school where his art teacher, Ian Bell, impressed on him that drawing was not a recreation but a “discipline to be enjoyed”. This approach continued into art school where maturing skills in drawing was a strongly emphasised component regardless of where that knowledge would take you.

He recalls: “The concentration on the formal disciplines of drawing [such as] composition and tonal study have served me to this day and instilled a confidence in my approach to imaginative composition. My drawing tutor, Ken Howard, demonstrated great enthusiasm and taught me ‘commitment to the mark’ as a guiding principal in any form of drawing. A principle I apply to my own teaching practice. Within Australia I have found that drawing is taught from a more ‘concept’ based approach rather than directing the drawing programme towards skills development. This is a valid approach but one that is lacking in the particular area that interests me that is to encourage students in the active engagement of their vision and ingenuity through the use of poetic language, music, memory and a wide variety of mark making exercises. This method stimulates a synthesis of ideas encouraging the students to listen to themselves and see from the inside out. It is a method designed to motivate students to put aside the more common intellectual responses and develop a way of seeing the language of their interior spaces and giving it integrity through the rigour of drawing.”6

2. Roger MacDonald, "In a Roomful of Paintings & Elsewhere" – An Appreciation of Andrew Antoniou,” 2003, www.antoniou.com.au 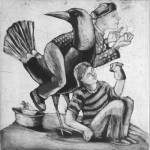 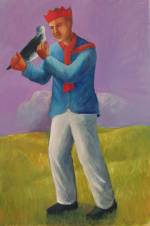