An Englishman in Tasmania - Nicholas Blowers

An Englishman in Tasmania - Nicholas Blowers

Nicholas Blowers was born in Chelmsford, England in 1972. He studied locally, and then Fine Art at Southampton, graduating in 1994. In Europe he remains largely undiscovered, but he has already made an impact both in Sydney and Tasmania, where he relocated in 2007. Blowers works on the depiction and experience of landscape elements, chiefly the detritus of forests. Most recently, in Tasmania, his art has focused upon the serially damaged forests and their landscapes. In fact, as an Englishman in Australia, he could be said to have followed a long tradition, running more recently via the painter John Wolseley (b.1938), who settled in Australia in 1976, and historically, the famous emigrant from London to Hobart, Tasmania, the painter John Glover (1767-1849), in 1831.

Glover reached Australia when he was 64, following his sons, who had already settled in there. His views of the Tasmanian landscape were essentially domesticated, showing the softer side. Blowers, by contrast, seems to be working at the peak of his talent, and strives to reveal the ecological damage that man is already perpetrating across the Australian forests; there is an urgency in his work as a result. The paintings are sobering and at the same time, with their subject material of great trees, awesome. They remind man of his own diminutive frame when set against these gigantic natural phenomena. Trees that have been felled industrially but which are too massive for ready logging and stacking. For once, nature has defeated man. The huge Eucalyptus forests - the tallest hardwood on the planet - and the ancient, thousand-year-old Myrtle forests have left a profound impact on Blowers' sensibility.

For Glover, it was too much. But Blowers has confronted it as subject matter. As he says, 'Brought up on a diet of Constable and Turner, I found new sights, new sensations, a period of exhilaration and yet incomprehension'. He quotes D.H. Lawrence, in Kangaroo, as saying, 'You feel you can't see - as if your eyes hadn't the vision in them to correspond with the outside landscape'.

Of course, Nicholas Blowers was bound to absorb the effect of the landscapes of Sidney Nolan, 'his quite brutal painterly technique of quick marks and his use of thin paint being dragged, showing the direction of a painterly gesture that so often in his paintings describes the contours of a form'. He was also influenced by the work of Brett Whitely, Fred Williams, Russell Drysdale and John Olsen, painting landscapes with lines and marks that he had never seen before. 'Prior to this the only other time I had seen so much orange was probably in a Francis Bacon backdrop.'

Blowers' art school heroes had been, as for so many others, Sickert, Auerbach and Kossoff. He arrived still wrapped up in a cocoon of the tradition of British Realism. He would still claim to have been profoundly influenced by Constable, who worked close to Blowers' Essex childhood coastline and landscape. Today he holds an abiding respect for the tradition of John Wolseley (who spent five months working in Tasmania himself in 1993) in Australia, on account of his deep connection with place, with the external world, often created in minute detail in his Whipstick outback works and collages.

With the Dickerson Gallery in Sydney, Blowers has recently held his third solo exhibition, producing a series of monotone oil on paper works, depicting the eponymous Australian fig tree. 'My interest,' he says, 'came from their muscular nature… split wounded trunks, the appearance of deformity, roots crossing each other and fusing into implausible shapes.' In a series of 'Night Figs', painted without leaves, standing in isolation and in blackness, 'they appear lit up as if caught in a camera flash'. And he quotes the Tasmanian writer Richard Flanagan: 'The particular agony of Tasmania is in the end neither environmental nor political, but spiritual, and it is in the end merely one end, a highly visible end of a continuum that extends from the muddy ash of the Styx valley to the blood spattered walls of Baghdad and the torture cells of Guantanamo Bay'.

This artist is now seeking new sanctuaries out in the Tasmanian forest, uncovering and depicting 'collapse and decay… An impenetrable dark wall of trees may offer a glimpse of light some distance inward - often a huge gum has fallen, clearing a pathway. A fallen gum will have left a splintered trunk surrounded by splinters of shattered bark. I was recently standing on the trunk of a huge fallen tree and looking back at the trunk, it appeared a totally implausible form, unique and singular like a castle turret whose walls have splintered and fallen outwards'.

Blowers says he continues to use primed paper to work up studies in black and white: 'My most recent paintings have moved away from a purely monotone palette and I have started to work on canvas'. This is prepared to give a smooth, non-absorbent surface, and he continues to scratch and draw off the paint with various tools and turpentine.

John Glover wrote of his excitement at discovering new landscapes, trees, birds and flowers in Tasmania. Blowers feels he can relate to that. 'Has anyone painted a wetland where the waters turned to acid?' Such phenomena for this artist open up a wholly new resource, and relate to a global ecological message at first-hand. Humanity on its present course may indeed already have perished, having outlasted its time on the planet, already devastated. 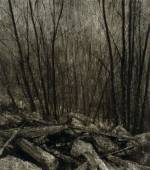 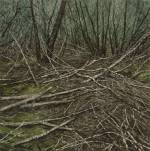