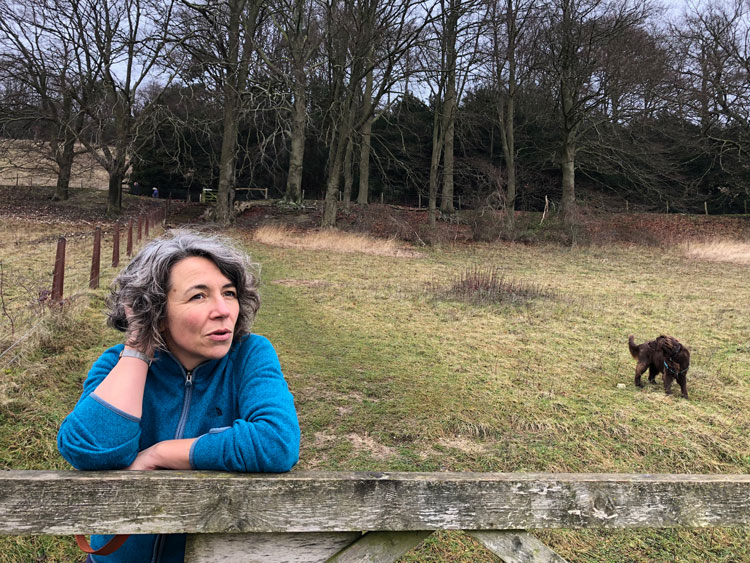 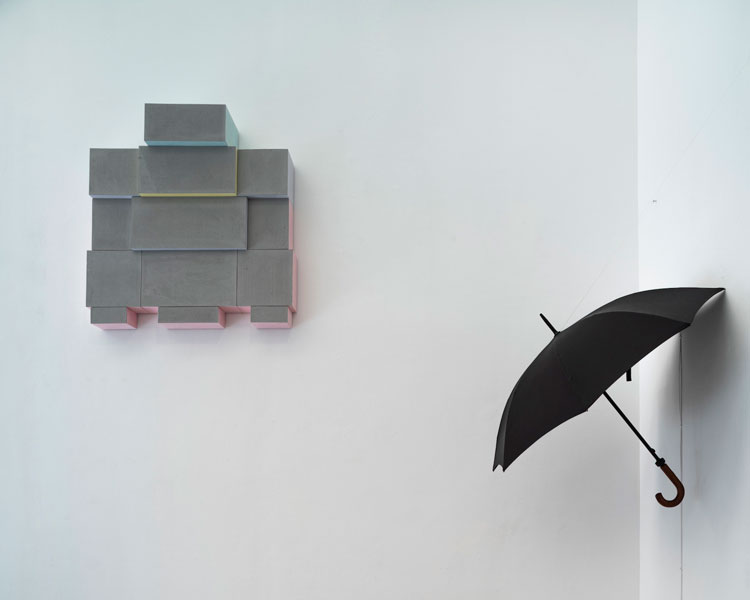 The artist, the first to win the Jerwood Drawing Prize for an audio piece, talks about the overlap between drawing and words, and explains what informs her practice

Alison Carlier’s art practice is based in drawing and, in 2014, she became the first artist to win the 20th Jerwood Drawing Prize (now the Trinity Buoy Wharf Drawing Prize) with a sound piece, Adjectives, Lines and Marks, a one minute and 15 second audio work. The artist described the conceptual work as “an open-ended audio drawing, a spoken description of an unknown object”. The source of the text is a reference book held at the Museum of London Archive in which the descriptive language evoked the object’s tone and materiality: “On reading the text aloud, I realised the piece worked similarly to prose; it exists in your head, rather than in a made or finished way … The adjectives remind me of the texture of dry materials such as charcoal or conté. The text seems to align itself, or suggest, marks on a 2D surface.” Her conceptual drawing is underpinned by a longstanding conventional drawing practice and she teaches drawing in London and the south-east.

Over the past 20 years, drawing has assumed a pivotal role in defining contemporary culture; it has absorbed history and knowledge as artists and designers themselves inform their practice, research and autobiography. In a global context, drawing exists irrespective of cultural identity. It is a basic human instinct to make marks. It could be perceived as ironic that, charged with the knowledge of new technology and the multitude of new forms and attitudes, artists and designers have chosen drawing in manifold forms. Understanding the role of art in a cultural milieu that is being constantly redefined is increasingly the remit of every artist. In our global culture, communications have been challenged and advanced at an extraordinary rate over the past century, and particularly in electronic terms in the past decade. Curiosity and an interest in neural function in the creative process have prompted Carlier to explore the meaning of drawing. She has conducted a series of interviews with artists in an attempt to explore and define the meaning of drawing and how the concept, the process and the finished product all play a part. She has described her investigation as “the Drawing Attitude”.

Janet McKenzie: Drawing has increasingly become a structural and conceptual necessity for many artists working today. It is no longer merely the creation of an illusion, but of psychological importance. How did drawing come to assume a pivotal role in your art practice?

Alison Carlier: As a child, I remember gazing at objects for a long time before I turned out the light to go to sleep. I remember just looking without thinking any thoughts in particular. I think observation comes first in the process of drawing; I was looking to understand the visual information of my bedroom. The familiarity of those objects, how the light fell on them, their form, served as a kind of visual meditation. The state of flow is well documented and I think that quietening of the thinking brain is an integral part of observation and drawing. Second, drawing as a verb, as an activity, like brushing your teeth, has a basic necessity to it, and with that comes a steadfast reliability.

JMcK: You completed an MA in drawing at Wimbledon. How did that course shape your practice or push it in different directions?

AC: Our course leader at the time, Michael Pavelka, was a set designer for theatre. He was like a laissez-faire parent who encouraged us to play and experiment, without imposing his views or opinions on us. I realised I loved the dialogue around drawing as much as the practice of drawing.

I homed in on What is Drawing? (published by Black Dog), especially the account of Lucy Gunning’s drawing residency at the Centre for Drawing in 2002. In a panel discussion, the painter Michael Ginsborg described her work as embodying a “drawing attitude”. Gunning’s residency work mainly consisted of photocopies and photos, with the odd pencil drawing on paper. For me, this idea released drawing from its definition. It meant that drawing had the potential to come off the page, as a way or approach to making artworks and working through ideas that could be as relevant as conventional drawn methodologies. JMcK: Can you explain how sound art and drawing came together in your practice, and which artists you have been inspired by?

AC: During my MA, I became interested in the closeness of handwriting and drawing – how we hold the pen or pencil in the same way. The written text became the drawing (even if I write my name, I am drawing). For me, the next logical step, in paring this back, was to remove the visual text. By using speech, the work became an internal visualisation, something that the listener could complete in their imagination. The drawing became something in your head, where it would end up anyway, whether it had gone in through your eyes or your ears!

I was at yoga the other day, and the tutor started the session by saying we would be focusing on observation. We spent most of the session with our eyes closed; observation was heightened as something felt rather than known or logically understood. I think this is where drawing and sound seem to happily coexist; taking observation further than the visual, further than that initial phase of processing what we see, as I mentioned at the beginning.

JMcK: Drawing can capture intensely personal, deep-seated experiential matter and ephemeral experiences. Can you explain why this might be so?

AC: This makes me think of those great drawings by Käthe Kollwitz, figure drawings, where the urgency and weight of the marks articulate suffering so accurately. Those drawings don’t seem to be about thoughts, but the physical rawness of trauma. This is when drawn marks can describe and convey human experience beyond words.


The ability of the sketch to capture fleeting moments may be more to do with its proximity to thought; in the Drawing Attitude (unpublished manuscript), Stephen Farthing says that, in works such as Leonardo’s Deluge drawings, there is very little between the idea and the hand. There is a directness to drawing that again circumnavigates words.

JMcK: Drawing is the first step towards abstraction, yet also an important way to incorporate reality into an overall scheme of things. The paradox makes drawing “both the most traditional of activities and potentially the most radical”.1

AC:  I love this dichotomy. That is drawing’s appeal: how it is anchored in the history of humankind, yet can open up a perpetual state of not knowing. Because drawing is part of what we all do at some point in our lives and, because it is mostly accessible and cheap, it can be the rock from which we jump into the water. Its steadfastness allows for exploration. That open-endedness seems to be part of the personality of drawing, one of its innate characteristics. Therefore, it seems natural that drawing should be pushed around and interrogated and subject to change.

When we are questioning what is and what isn’t drawing, it’s useful to stretch the definition to its edge; the work then either tips over the edge or affirms where the edge lies.

JMcK: Can you describe the relationship between the marks employed to denote a smooth, calm experience and those that refer to a spikey object or confrontational feeling?

AC: I think this links to sound. I heard on the radio the other day that, in recent research, scientists have found that emotions are linked to shape and sound. They found that round shapes have a calmer effect and have lower frequencies, whereas angular shapes agitate and have higher frequencies; so the forms in pictures literally affect our emotions. I think the relationship between what we see and what we hear is fascinating; this links back to the internal visualisation of the audio drawing. Descriptive words, made up from alphabets, which have been informed by the spoken word and the sound of utterances (is it a coincidence that the word “smooth” has a soft sound with rounded letters and “brittle” has a hard sound with crossed letters? And might this transfer globally across languages?) – likely create corresponding shapes in our visual imagination. I’m not interested in whether this can be proved or disproved, but I do think this area opens up new possibilities for art-makers as communicators.

JMcK: What distinguishes a refined realistic drawn image from a minimal or abstracted one that evokes a strong emotional response in the viewer?

AC: I think a good or effective drawing allows me to move. There is space within it for me to participate, reflect and feel, so that my part in the work becomes active. In a similar way to the audio drawings, I am completing the work in my imagination. Unfinished works on paper and very quick sketches sometimes do this. I think this is why those very detailed, pencil drawings that take weeks to complete give me a sense of suffocation.

JMcK: You challenged convention with the very act of submitting a sound piece for one of the most important drawing prizes in the world? Where did your desire to interrogate assumptions, to unpack received wisdom come from?

AC: Yes, it was a wildcard! Despite the advantages of living in a democracy, choices available to us remain partially controlled and limited; how to move along the street, what food to buy, how to act and behave, how to celebrate Christmas, etc. I like to remind myself and others that these behaviours are not set and have the potential to change. And because drawing for me is to do with my mind and my perception, I feel it is rich terrain when it represents this potential for change. And this approach enables drawing to be an exploratory process rather than an established definitive.

JMcK: Recently, you have referred to Rosalind Krauss’s Sculpture in the Expanded Field, and the shift beyond the post-medium condition. What are you working on now?

AC: I’m planning an exploratory participatory drawing workshop on board a ship on the North Sea, as a play on Krauss’s text A Voyage on the North Sea. And I’m working with a choir leader to arrange a choral work based on the doppler effect of aeroplanes changing tone as they pass overhead on their way to and from Gatwick airport; as a kind of lament to the aircraft industry.

This year, I want to work further with how language is internally visualised or felt; and how it might cross over to physical and sensory experience. What interests me most is what happens when we don’t understand language; where that misunderstanding goes, how it inhabits the body or how could that sensory, subjective experience be expressed through drawing or materials.

Salomé Voegelin touches on this when she describes Maurice Merleau-Ponty’s phenomenology of perception as“a world and art perceived rather than known”.

Reference
1. Joseph Beuys quoted by Bernice Rose: Joseph Beuys and the Language of Drawing. In: Thinking Is Form: The Drawings of Joseph Beuys by Ann Temkin and Bernice Rose, published by Thames and Hudson with Philadelphia Museum of Art, and the Museum of Modern Art, New York, 1993. page 75.