In the year that has seen the Black Lives Matter movement and the questioning of what public statues should represent, Abigail DeVille’s symbolic installation is particularly timely 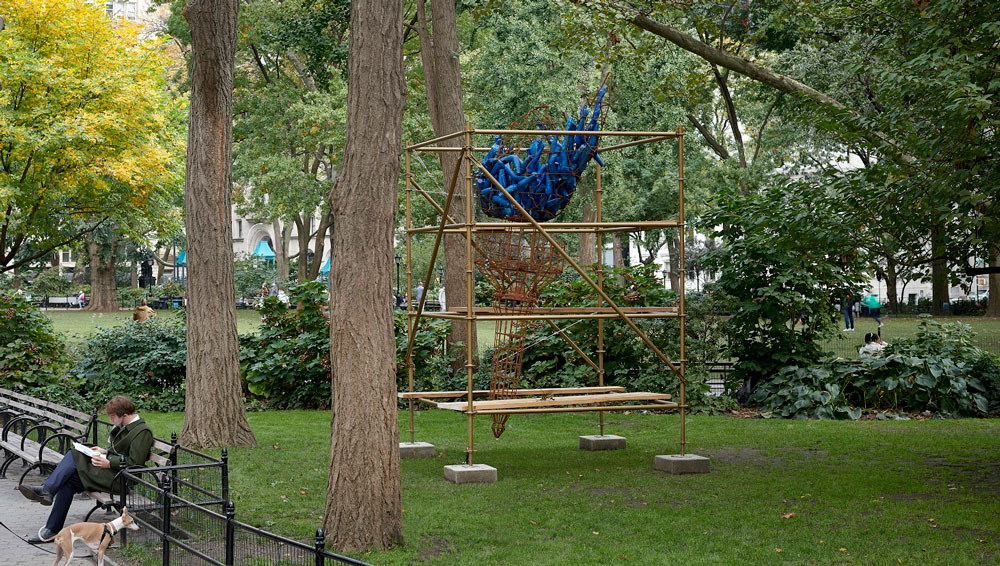 Light of Freedom, an anti-monument that challenges the meaning and definition of monuments, by Abigail DeVille (b1981, New York), debuted in October in Madison Square Park in New York. DeVille’s practice, which includes sculpture, installation and performance art, revolves around black social history and related topics and was spurred on by the Black Lives Matter movement over this past year. While social and political concerns comprise its core, Light of Freedom, modelled on the Statue of Liberty’s iconic torch, is also historically apt, reprising the earlier viewing of the original triumphantly raised, torch-bearing arm that soared above the park from 1876-1882, to drum up enthusiasm (and funds) for the not-yet-completed figure by Frédéric Auguste Bartholdi. 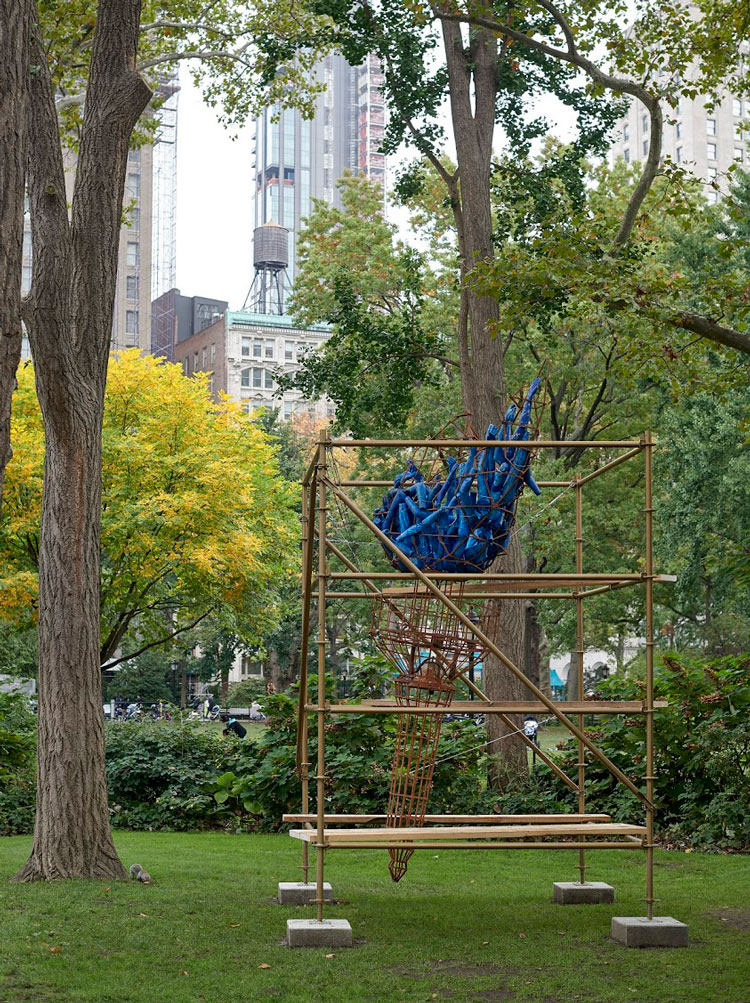 DeVille’s dramatic, open-weave 13-ft (3.96-metre) construction intentionally appears as a work in progress, its steel armature making another historical reference, reminding us that Gustave Eiffel, of Eiffel Tower fame, built the Statue of Liberty’s metal framework. But more pointedly, it underscores the yet-to-be-achieved promise of Lady Liberty, as spelled out in her official name, Liberty Enlightening the World – or less hubristically, even merely the US. The unjust dispensation of the inalienable rights guaranteed by the Declaration of Independence has long been the source of anguish and outrage, erupting periodically in seismic protests, as it has across the country and elsewhere during this unprecedented year. 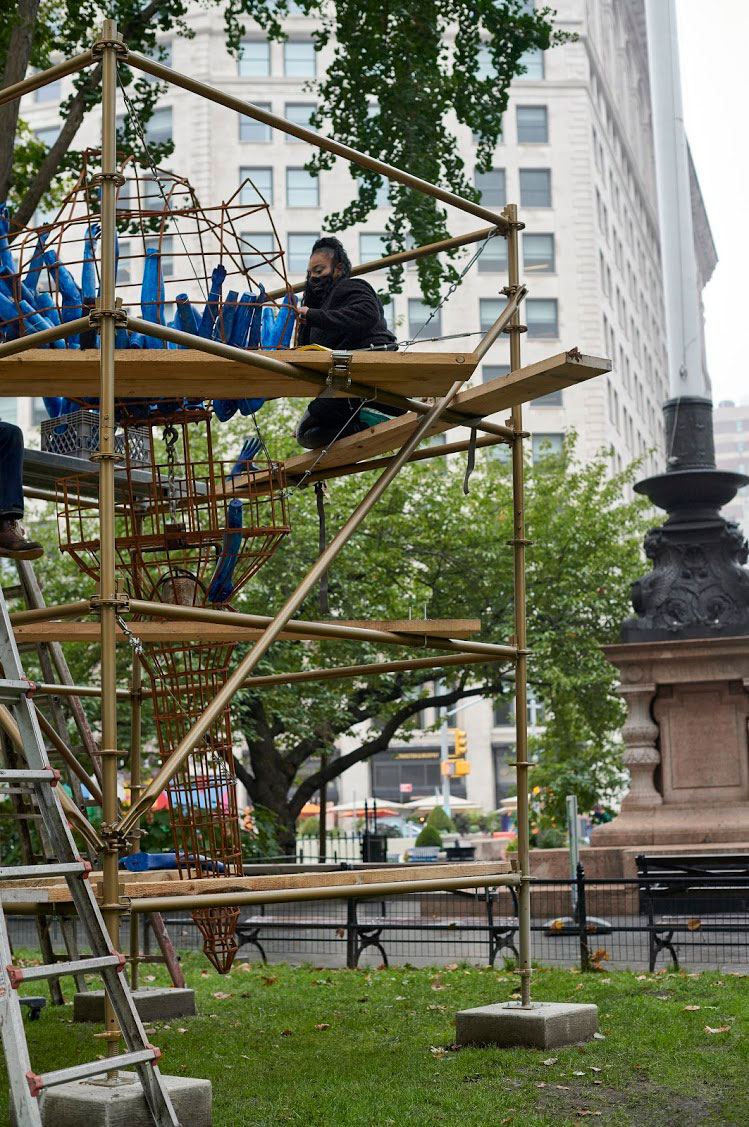 DeVille introduces a number of variants. In her beacon’s shaft, she has locked in place a rusty bell; shackled, uncared for, her bell cannot ring out. The flame is replaced by a jumble of mannequin arms, coloured blue. Is that a politicised shade, or, more slyly, a generic skin tone for aliens, for non-white immigrants? Mannequins appear regularly in her projects, surrogates for those who are not seen as humans, who are interchangeable, disposable. The symbolic arm of Lady Liberty has been multiplied, like the huddled masses in Emma Lazarus’s 1883 poem The New Colossus, arguably once known to every American schoolchild, who are, however, not masses but individuals, each with their own story and in desperate need of sanctuary. Struggling against the confines of the skeletal frame, arms and hands outstretched, the stiff limbs seem to clamour to be let in (as refugees) or let out (as the wrongly incarcerated), pleading for succour in the name of justice, compassion and enlightenment. 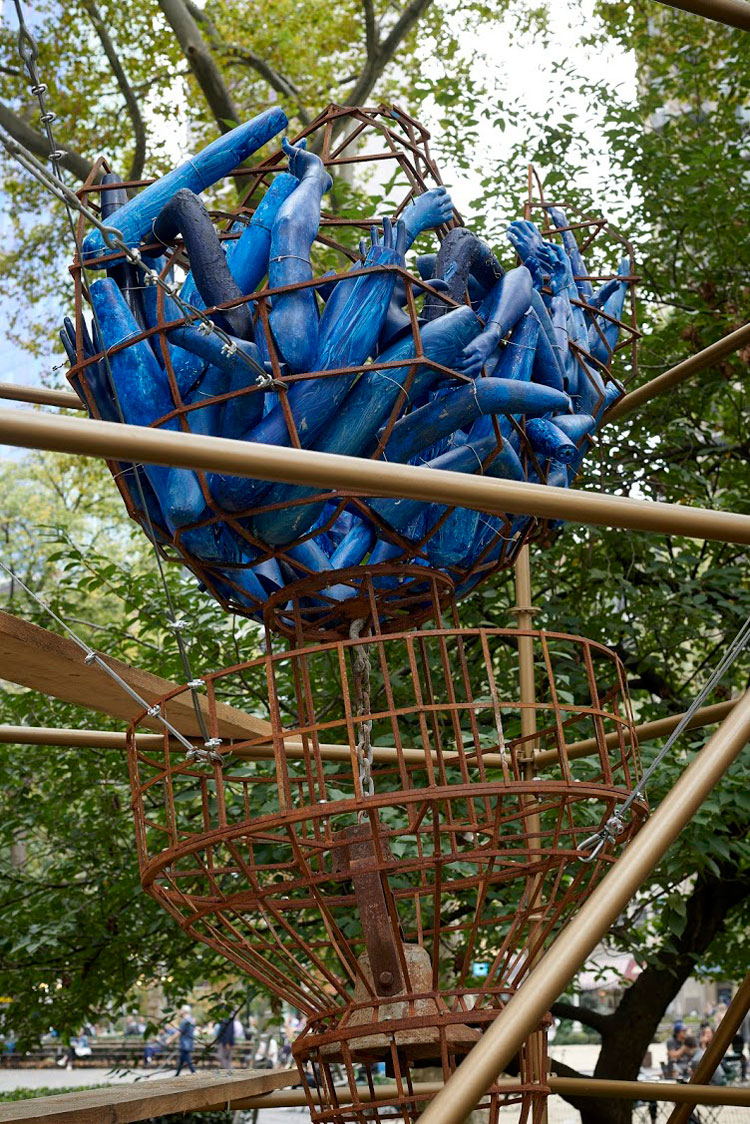 The schematic torch is suspended within a scaffold that is gilded gold, as if to reframe and give worth to labour and labourers, the majority of whom are immigrants or people of colour, essential workers without whom no society could function, as we have learned – and must not forget – during these months of civil unrest and “reckoning”, as DeVille put it. 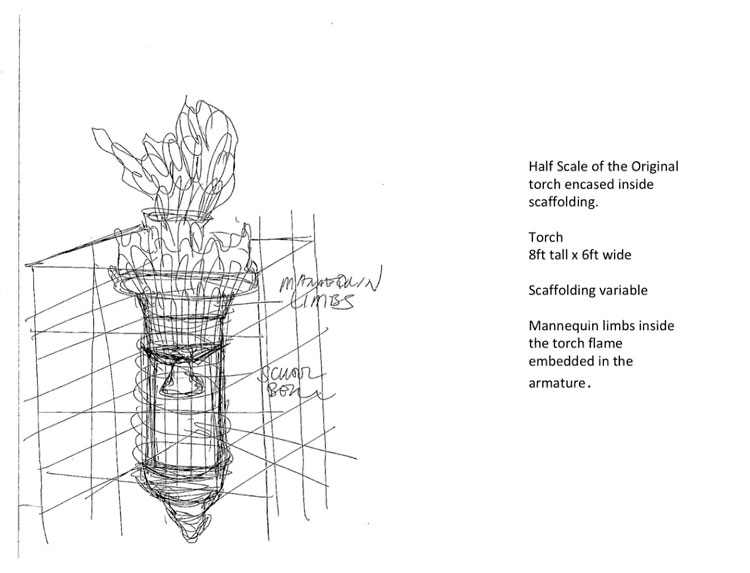 DeVille’s torch is much more accessible than most monuments, able to be seen almost at eye level, transforming it from a lofty ideal to something more mundane: liberty and justice as an ordinary right within reach of all. It recalls criticism of other monuments in a year when statues of the Confederacy are being toppled or removed and other commemorations to slaveholders retired, relocated, renamed, or given “context”. It also brings to mind, among others, Danh Vo’s 2014 We the People, a powerful, disassembled version of the Statue of Liberty, or Tatzu Nishi’s Discovering Columbus, a popular, playful 2012 project that was a tribute to Columbus’s statue at Columbus Circle in Manhattan, building a sky room around it before the explorer’s legacy was censured and its removal vociferously demanded. 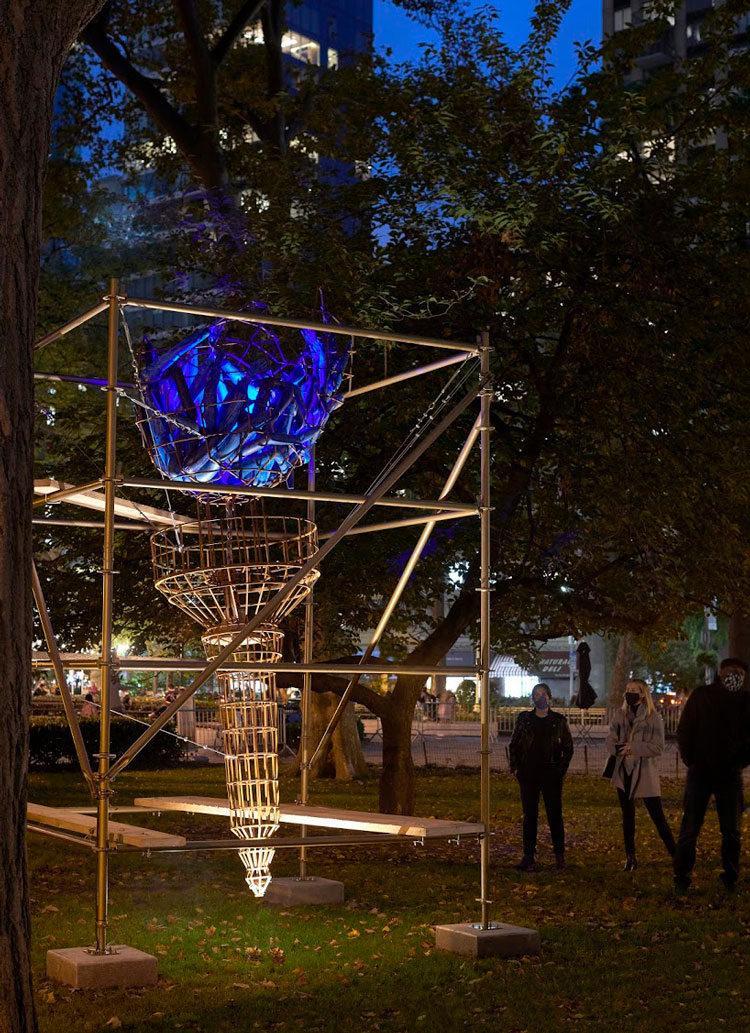 DeVille also shines a figurative light on the Statue of Liberty itself, swirled by so many associations, beloved as the symbol of US democracy and condemned as a fraud, a farce. We are asked to question public monuments in more profound ways: what form should they take, what should they look like in the future and who gets to choose them, who pays for their commission and what are they actually commemorating, what purposes do they serve, what messages do they send, who do they represent, what public spaces are they permitted to occupy, how long are they permitted to occupy them, and who maintains them? 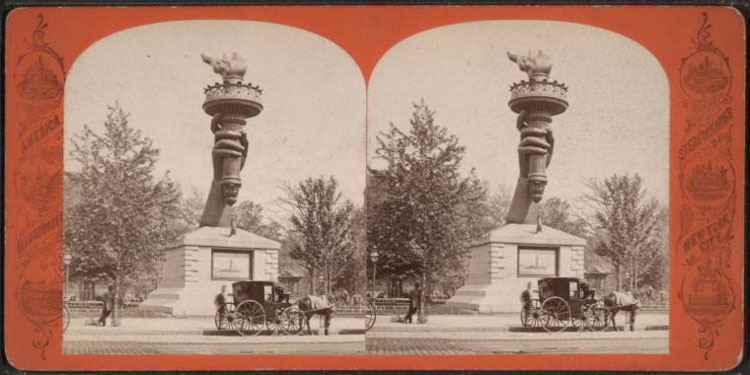 Light of Liberty points out the myriad contradictions and divisions in our society and tells us that we have a long way yet to go before the dreams embodied by Liberty’s torch are substantiated, as the struggle continues. As winter has arrived, the torch and scaffold has become much more visible, the foliage of the park stripped away. I can’t help thinking how that reflects the way the faultlines in US society have also been more starkly, dismayingly bared over the course of these many months. “America never was America to me,” the poet Langston Hughes mordantly stated in his 1936 poem Let America Be America Again, something that is tragically, shamefully, still true for many. Nonetheless, we, like the artist, can hope. As DeVille said, quoting the abolitionist, author and orator Frederick Douglass: “If there is no struggle, there is no progress.”

• Abigail DeVille: Light of Freedom, commissioned by Madison Square Park Conservancy, is on view until 31 January 2021. It will then be exhibited at the Momentary, a satellite contemporary art space of Crystal Bridges Museum of American Art in Bentonville, Arkansas.