This exciting exhibition at the Towner is paired with another show, Reuniting the Twenties Group: From Barbara Hepworth to Victor Pasmore. Together, they look at the life and legacy of the gallerist Lucy Wertheim and the young British artists she championed in the 1930s 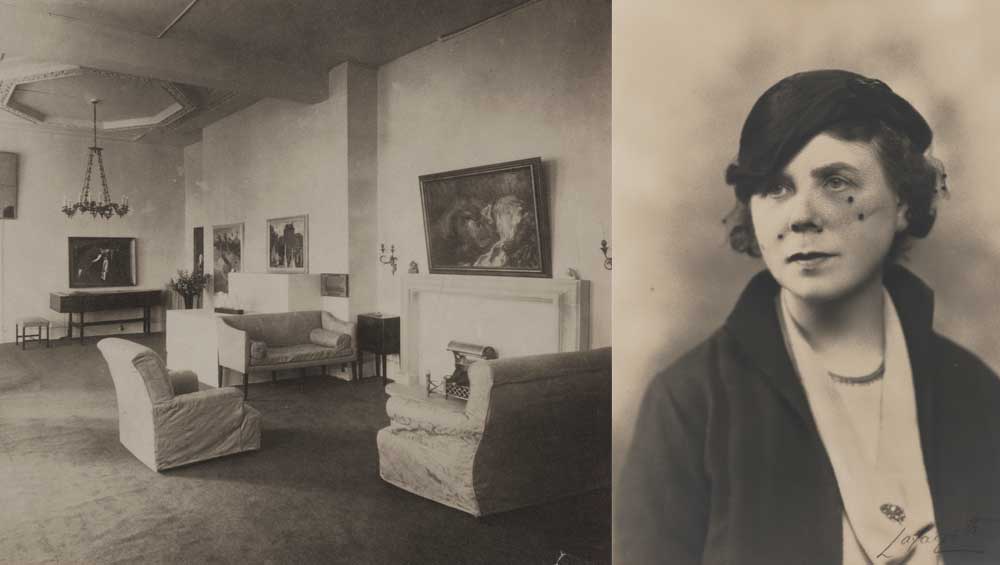 Who was Lucy Wertheim (1883-1971)? A pioneering gallerist, art collector and patron, in 1930 she opened the Wertheim Gallery in London and founded the Twenties Group (comprising of emerging artists in their 20s). She opened further galleries in Brighton, Manchester and Derbyshire and bequeathed more than 50 works to the Towner Collection. Wertheim had no formal art or business training and instead relied on her intuition and a fervent belief that young British artists should have the same opportunities and recognition as their colleagues in Europe. She was passionate, fearless and determined to exhibit the work of the young artists she valued so much, and the established artworld conventions of England in the 1930s were not going to hold her back.

With more than 150 works between them, these two companion exhibitions at the Towner Eastbourne tell the story of Wertheim’s life and work, her important place in the history of art in Britain, and her significant impact in helping to shape the careers of many young artists. Some of those artists she supported during the gallery’s short life from 1930 until the outbreak of the second world war in September 1939, such as Barbara Hepworth (1903-75) and Victor Pasmore (1908-98), went on to become successful and well-known. Others did not. Still, her idea was simple enough – to nurture the talent of young artists as they graduated from art school. She invited applications, interviewed each one personally, and offered a place to those she thought showed promise. Her approach differed from other galleries as membership was free and the gender split was reflective of artists coming out of art school, with just under half of those recruited being women. Reuniting Wertheim’s Twenties Group artists today and recounting their story and hers tells us a great deal about the 1930s artworld in Britain and the circumstances in which Wertheim and her artists found themselves. It is to this exhibition’s credit that it addresses both her defiantly personal passion for the support and advancement of these artists as well as the more mixed response of the critics at the time. There are so many lost names here, too, artists long since forgotten, but shown as worthy of being included in a history of art in Britain that is, thankfully, being perpetually revised.

In Reuniting the Twenties Group, I was particularly struck by the work of the painter Kenneth Hall (1913-46). Hall and fellow artist Basil Rákóczi (1908-79) met in 1935 at a meeting of the Society for Creative Psychology. The idea of the group, set up by Rákóczi and his friend Herbrand Ingouville-Williams (1869-1945), was to form a methodology grounded in “the natural rhythm of life”. Their regular weekly meetings, up until the outbreak of war in 1939, was discussion, psychoanalysis and group therapy. Hall’s paintings from this time drew on these sessions and they are wonderful.

Two works by Hall from the early 1940s are shown in the exhibition, where the automatic drawing of the unconscious meets a few small colourful moments of conscious thought. They bring to mind the scraper-board drawings of William Johnstone (1897-1981), made about 10 years previously. It was Wertheim who gave Johnstone his first solo exhibition in 1935 and I wonder if he and Hall ever met. Hall, Rákóczi and Ingouville-Williams moved to Ireland in 1940, reviving the Society for Creative Psychology and the White Stag Group they had begun in London. It is a fascinating story and Rákóczi’s painting Our Lady, Leenane first exhibited in 1940 hangs alongside Hall’s work in this exhibition. Rákóczi’s work is very different from Hall’s, being something of a homage to that of Christopher Wood (1901-30), also collected by Wertheim.

In A Life in Art, the work by Phelan Gibb (1870-1948) is stunning. Courting controversy with his paintings of nudes, such as Three Graces (1911), Gibb found more success and acceptance in Paris than in London or Dublin. Abusive reactions to Gibb’s 1912 exhibition in London caused it to close after just 10 days. The following year an exhibition scheduled in Dublin failed to open at all when pressure from the church caused the police to confiscate Gibb’s work. Yet, Wertheim took him on, giving him solo shows in 1931 and 1939, and including him in most of her group shows of modern painting, providing a platform for his work.

The women in Wertheim’s story were key, with Eve Disher (1894-1991), Biddy McNay (1913-2000), Ala Story (1907-72), Kathleen Walne (1915-2011) and Nan Youngman (1906-95) all significant in helping to make the gallery a success. Youngman, is a good example of one of those forgotten women. She was a painter and part of the Twenties Group. Originally trained at the Slade (1924-7) by Philip Wilson Steer and Henry Tonks, Youngman was an important figure in art education for children and those who taught them. She organised the first exhibition of children’s art at the Wertheim Gallery with 196 works from school children. This was more than 10 years after Roger Fry’s exhibitions in 1917 and 1919, at the Omega Workshop in London, of work by children taught by Marion Richardson, and Franz Cižek’s exhibitions of Viennese pupils from his Juvenile Art Class in London in 1921. Still, Youngman’s exhibition was an important landmark in exhibiting children’s art in a gallery setting.

These two exhibitions – A Life in Art and Reuniting the Twenties Group – are a real opportunity to reclaim the life and career of Wertheim and her lesser-known artists, and the Towner has grasped that opportunity with its associated publications and events. Wertheim’s memoir, Adventure in Art, first published in 1947, has been republished with additional essays, giving the inside track on Wertheim’s approach. Artists’ research residencies, workshops, book groups and a discussion day are also planned, not only to engage a range of audiences, but also to explore some of the lesser-known female artists in Wertheim’s collection and in these exhibitions. It is always a thrill to come across an artist you haven’t heard of previously and feel inspired to find out more about them. The exciting thing about these exhibitions is that discovery will happen time and again on an individual level and, we must hope, this will help to reclaim and enrich our understanding of the history of art in Britain in the 1930s and beyond.