The internet has devolved into a totalitarian supra-state defined by ruthless neoliberalism and aggressively accelerated technological development – or so imagines Zach Blas’s science fiction film Jubilee 2033 (2017), which premieres at the artist’s Gasworks solo-show Contra-Internet. As with many speculative futures, Blas predicts conditions that have already begun to take shape. Google and Facebook enjoy an advertising duopoly, attracting one-fifth of all global industry spending in 2016. Meanwhile, carnivorous retail superpower Amazon threatens to swallow Australian small business whole when the company sets up shop in the country laterthis month. Employing queer and feminist theory, Contra-Internet tackles the internet’s growing hegemony and explores future forms of resistance. 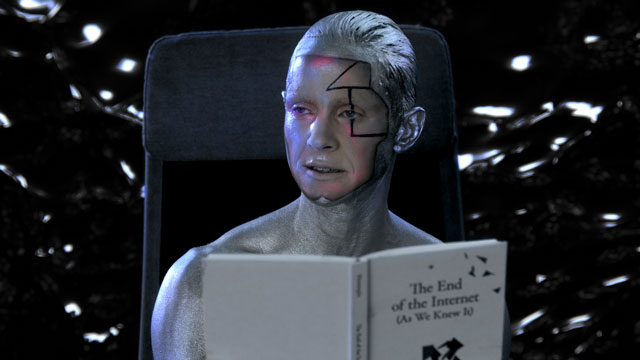 Blas’s film is partly based on the opening scene of Derek Jarman’s queer punk movie Jubilee (1978), in which a time-travelling Queen Elizabeth I journeys to 70s punk Britain. In Jubilee 2033, however, it is the 20th-century novelist Ayn Rand who is transported, this time to a Silicon Valley of the near future governed by the technocratic free-market fundamentalism advanced in her books. A counter movement, though, is led by an artificial intelligence prophet named Nootropix, whose students learn of the contra-internet, a network outside the internet’s catch-all web of power, which stands in direct opposition to Rand’s philosophies. For example, in Rand’s 1957 novel Atlas Shrugged, one industrial magnate asks another: “If you saw Atlas, the giant who holds the world on his shoulders […] knees buckling […] arms trembling […] and the greater his effort the heavier the world bore down upon his shoulders – what would you tell him to do?” The second magnate replies: “I … don’t know […] What would you tell him?” “To shrug”, comes the answer. Blas directly challenges the laissez-faire import of this passage in Jubilee 2033, when Nootropix mimes heaving a heavy ball high overhead, potentially foreshadowing a future in which computers emancipate humans from labour rather than accelerate capitalism as they do currently. 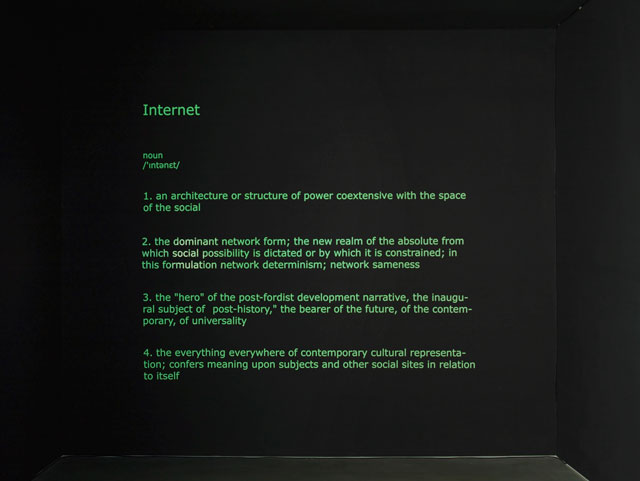 The film and exhibition not only critique Rand’s “morality of rational self-interest” but also her works’ valorisation of masculinity. Drawing parallels between the fictional world Rand built around those she dubbed “men of talent” and today’s real-life digital frontiersmen (Jeff Bezos, Mark Zuckerberg, Elon Musk, etc), stamped on a gallery wall in luminescent vinyl, Blas offers a critical definition of the internet as “the ‘hero’ of the post-Fordist development narrative” (Totality Study #1: Internet, a definition, 2015). It is not only the male heroes of Rand’s novels that Blas is critical of, but also the female underclass purposed to satisfy their the sexual desires. In Jubilee 2033, Rand comes across Azuma Hikari, a real-world assistant AI. Unlike Apple’s Siri or Amazon’s Echo, Hikari not only has a voice but also a holographic female body, specifically designed to appeal to lonely young bachelors. She is designed like cutesy anime character with blue hair, a miniskirt and thigh-high socks. Echoing themes of time travel in Jubilee 2033, on her website, Hikari calls herself a “Dimension Traveler [sic]” come to Earth in search of a male “master”. She will perform simple tasks, such as providing wake-up calls, or stimulate desire by sending her master texts at work saying things such as “Come home early” or “Can’t wait to see you.” Such artificial intelligence allows men to create women without autonomy, not all that far away from the newly developed sexbots, or rapebots as they have been called, programmed never to say no. How could that not instil greater degrees of sexual persecution? 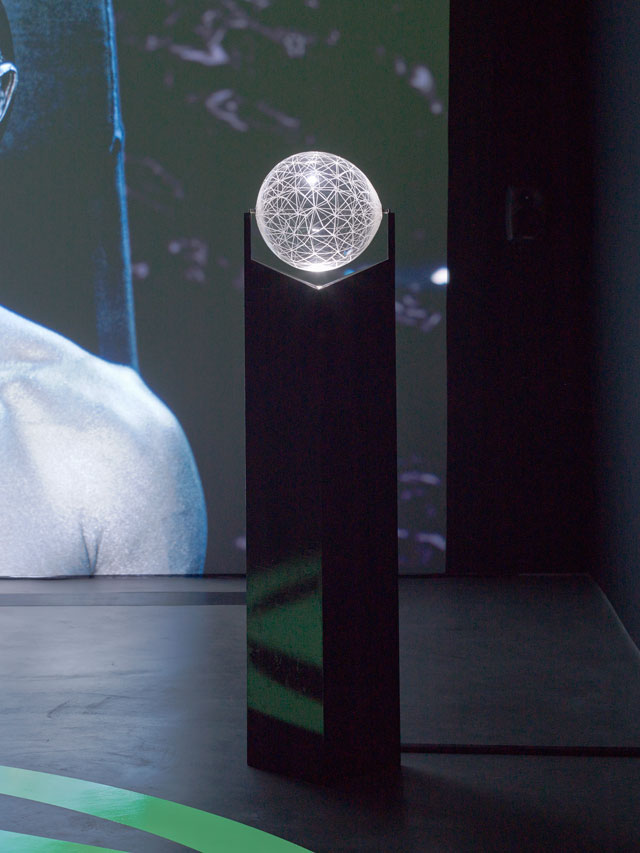 Blas’s alternative to such oppressive technology is deeply rooted in Beatriz Preciado’s Contra-sexual Manifesto (2002), in which the author deconstructs binary essentialisms surrounding sexuality. Preciado displaces distinctions of sex, gender and desire by advocating “dildotectonics” – the notion that, because a penis can be substituted for a dildo, anatomy does not define sexuality. So, in Jubilee 2033 – unlike Hikari – Nootropix is androgynous; the character’s naked body is covered in reflective silver paint, obscuring the contours of the chest, while taping hides the genitals. Like Preciado’s contra-sexual, Blas’s notion of the contra-internet is defined by a position of exteriority, exploring how subjects can operate outside hegemonic systems. Blas draws on Ulises Ali Mejias’ idea of the paranode, which the author outlines in Off the Network (2013). For Mejias, paranodes are the negative spaces in a network, the areas between the lines of communication and the points at which they meet. In what might be called a manifesto for the contra-internet published on e-flux, Blas sites the Hong Kong pro-democracy demonstrations of 2014 as an instance that approached the potentiality of the paranodal. In order to communicate, protesters bypassed the state-controlled internet by using FireChat, a mesh-networking system that operates via Bluetooth or peer-to-peer wifi. Inversion Practice #3: Modeling Paranodal Space (2016), one of three short performative videos in the Gasworks show, features an animation of a network that dismantles into fragments and disperses to the cosmic sound of Joe Meek’s I Hear a New World (1960), once again conceiving a future free from the strictures of the internet. 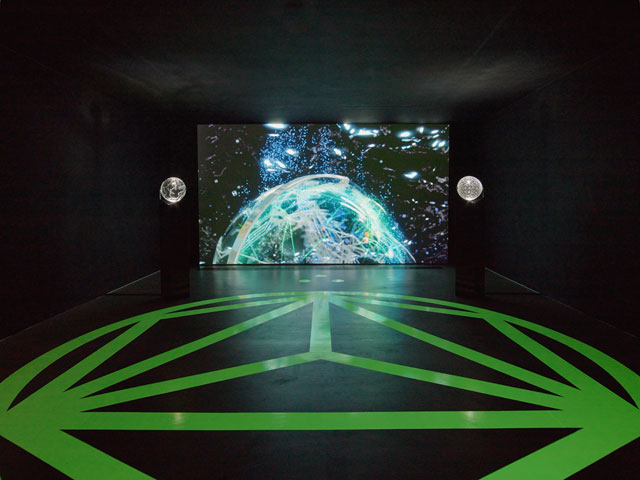 The paranodes are not the unadulterated utopia they appear be, though. Two glass globes set on plinths, Palantir: Killed Internet (2017) and Palantir: Disappeared Internet (2017), feature a map of the world’s undersea fibre-optic cables and a distributed network diagram, respectively. While the transparent areas between the printed lines suggest spaces of unrestricted possibility, they are, in reality, just as regulated as the internet itself. The works’ title “Palantir” refers both to the all-seeing stone balls in JRR. Tolkien’s Lord of the Rings (1954-55), as well as a big-data analytics company based in the US, which specialises in counter-terrorism. Both denote invasive forms of surveillance, but counter-terrorism is dependent on predicting deviant behaviour; in other words, it is specifically dedicated to codifying paranodal activity. The paranodes are under increasing threat from the internet’s ever-expanding network, a notion the visitor feels encircled by in The Seal of the Absolute (2017), a large, authoritarian network diagram printed in luminescent vinyl across the gallery floor. The internet of the future, it seems, has already been netted.