The process of making a sculpture is a performance art in itself, says the Japanese artist, who explains how he works with an audience, experimenting with found materials, chance and outcome

The Japanese artist Yoshihito Mizuuchi is more interested in the process of making sculpture than the finished product. He sees the creative process as an event, to which he invites an audience to watch, participate and affect the outcome. With Mizuuchi, the outcome is always surprising, especially when things don’t go to plan – because that’s when they get interesting. From a hole in a sculpture to unpredictable weather, the environment is also a participant that changes how his work develops.

There are many layers to Mizuuchi’s practice; he has a very broad, catch-all approach to what he produces, using the label “Mrs Triangle” as an umbrella brand for all his work. Born in Hokkaido in 1978, he was always making things when he was a child, from music to comedy or sound collages on cassette tapes, and he went on to study interior design at Osaka University of Arts. He currently works mostly with found materials, taking inspiration from the “various trifles of the everyday”. He has worked with rainwater, plastic bags and even noodle soup, materials that he selects to appeal to the different senses.

In June, Mizuuchi participated in a group exhibition called Open Gate, part of a project called Asian Sounds Research, which is based on Penang Island, Malaysia. The curator of the exhibition, Sachiko M, had been travelling in Malaysia and was so inspired by the environment that she began to look for a project space where she could collect sound artists together, explains Mizuuchi. The result was Asian Sounds Research, and Open Gate was the first exhibition to be held there. Sachiko selected two Japanese artists, Mizuuchi and Tadashi Yonago, along with two artists from Penang, Annabelle Ng and Hoo Fan Chon, for the exhibition, which ran between 6 June and 21 June 2015. The artists involved created sound works inspired by the local environment, and audiences were invited to participate and interact with the works.

“I made a new work in a more experimental style than usual,” says Mizuuchi, describing the work he made for the exhibition. “I wanted to find material in Malaysia, so when I arrived I looked around. There was a lot of rain every day, so I decided to try working with it. I made a big pool to collect rain. I also made a big puppet out of wood, plastic bags and cardboard. It was very cheap, but so big. If it was raining, the weight of the rainwater would move the puppet.”

There was, however, a slight hitch. “On the day of the performance, it didn’t rain,” says Mizuuchi, “So I tried it using water through a hose from the kitchen. When the puppet filled up with water, it started moving.” Mizuuchi didn’t see this as a hitch, but the participation of the environment with the work. “It wasn’t intended to be a direct sound piece,” he says, but explains that, because of the performative aspect of his work, every piece is an indirect sound piece.

“I like performance because, for me, it’s the same as making artworks. I make a sculpture, blow it up, break it, connect it to something – and that is the performance. During performances, I want to make something, like action painting, making drawings and sounds. Artworks usually have an audience, but, with performance, the creator also has an audience. For me, the important part is during the making, not afterwards.”

Mizuuchi described a similar piece titled Zwei Danke Kassenbon, which he created while he was artist in residence in Dusseldorf in 2012. It was also made out of plastic bags and was part of a performance for the opening of the exhibition. “First, I made a big sausage-shaped balloon out of 500 plastic bags. So, at first, it was just a black sculpture on the floor and then, finally, on the opening day, it was blown up so that it filled the space it was in. Some people moved outside the space and some people couldn’t get out, but then, by accident, the balloon was broken and the audience could see inside. It was very beautiful and many people went inside. It was a good accident. People found it funny and they were surprised! One person was angry because they couldn’t get out!”

Mizuuchi sees sound and performance as a material, just like sculpture or drawing. “I feel as if everything is sensory: music, sound, sculpture, drawing and performance – these are just different materials. So, for example, in this performance, I wanted to mix sound and sculpture. Everything is to do with the senses – eating noodle soup makes a sound, but it’s also like a sculpture. Very simple things, such as how we feel about objects or accidents [are part of the performance].”

Mizuuchi’s brings his whole practice together by making all his mediums and activities part of his independent label, Mrs Triangle. “I have many kinds of jobs – sculpture, artwork, music. All my works are like a small company,” he says. “Last year, in my studio, I made a bar. It is a very strange bar. I like bars and the name of the bar is also Mrs Triangle, so everything is included.”

The audience is a very important part of Mizuuchi’s practice. In particular, the social environment of the bar is something he has explored in his work. “The bar is like a community space where everyone feels happy, with alcohol and food, talking and discussion – like a salon,” he explains. “It’s a small social system bringing together friends, music people, art people and neighbours, and many things can happen.”

It is this potential and opportunity for action and chance happenings that excites him. In Osaka in 2013, Mizuuchi held an exhibition in his bar in Osaka, which he occupied for a few days between noon and midnight. The small space functioned as a normal bar, with drinks and people having fun, but there were also some other, strange things on offer. Mizuuchi explains: “I made a menu from which the audience could order my performances. Through ordering, they were also part of the performance. By the end there were more than 300 performances ordered!” He liked how everyone was there together in the space, getting to know each other and becoming friends. By choosing an environment where people feel relaxed, he encourages participation and social interaction in the crowd.

Mizuuchi’s experimental performance art is about making people think about the sensory properties of everyday objects and re-examining the collective environments of everyday situations – even a busy bar on a Friday night can be called art. 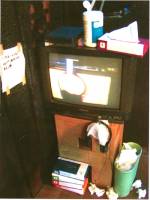