Vikings: Life and Legend opened at the British Museum to mixed reviews. In the newly finished Sainsbury exhibitions gallery, it showcases some impressive recent finds from both the UK and Denmark. But the Hollywood image of the hairy, horn-headed, axe-wielding barbarian may make the museum’s latest exhibition a disappointment for those hoping to meet the ghost of Erik the Red.

“They are the filthiest of God’s creatures,” complained an Arab diplomat in AD921. “They are like wandering asses.” Ahmad Ibn Fadlān was talking about the Vikings. Those most notorious Scandinavians have certainly suffered from a bad press throughout history. Their reputation as fearsome, violent, unyielding raiders is one that persists in the popular imagination, and will surely bring a heavy footfall through the British Museum’s doors. But, ironically, the Viking’s legendary status may prove to be a thorn in the museum’s side.

The word Viking or vikingr means pirate or raider in Old Norse and represents only a small proportion of Scandinavian society during the so-called Viking era between the late-eighth and early- 11th century. However, for kings and chieftains in particular, it was important to be seen as strong, warlike and wealthy. A huge amount of time and effort went into crafting technically advanced and intricately decorated weapons. This exhibition has a huge array of Viking swords, helmets (which unlike the popular 18th-century image, did not have horns) and axes, all paying testament to the importance of the warrior in Scandinavian culture.

This exhibition also serves to remind us that the Vikings were traders, skilled craftspeople and cultural magpies. Rich materials, artistic influences and even the use of currency were assimilated into Scandinavian culture from Europe, Russia and beyond. It would seem that the Vikings were both raiders and traders, with a weakness for gold. One of the most impressive pieces in this exhibition, if just for its sheer size, is a 10th-century neck ring from Denmark, which would have weighed in at over 2kg before parts of it were removed for use as gold bullion. Also included are several unwieldy brooches the size of saucers with pins more than 30cm long, a surely perilous method of keeping one’s cloak fastened.

Women in Viking society also held power and influence. Displayed alongside the swords and oversized brooches are a collection of small, unassuming keys found in women’s graves. These modest pieces belie the importance of the individuals who owned them. The key represented the women’s status as lady of the house, controller of the finances and keeper of grain stores. Viking women also engaged in trade and could inherit and hold property in their own right, a luxury only afforded to British women at the turn of the 20th century. They also held a more mystical position in society. Included in this exhibition are a number of iron sorceresses’ staffs. Magic was, for the most part, practised by women.

The centrepiece of this exhibition, and the secret to the Viking’s success, is the Viking warship. In the late-seventh century much of Scandinavia was mountainous and heavily forested, making travel overland largely impractical. In order simply to meet their neighbours, people had to use boats, and it was with this nautical knowhow that the Vikings became a force to be reckoned with. They travelled as far west as the coast of Canada, colonising Iceland and Greenland (named as such to make it sound more appealing – don’t say the Vikings didn’t have a sense of humour) and as far east as Afghanistan. They traded, settling and pillaging as they went, their shallow-bottomed boats perfect for landing on beaches and sailing up rivers. Remarkably, the Viking warship on display here was one of nine excavated during building work at the Viking Ship Museum in Roskilde, Denmark in 1996-97. Although only about 20 per cent of the oak timbers survive, a specially constructed metal mount cradles the remains, serving to outline the original shape of the monumental ship. The warship would have been more than 37 metres long and carried 40 pairs of oars, making it almost twice as big as the average Viking boat and the largest ever found.

Despite their nautical skills and warrior credentials – they would surely have been a frightening sight with their filed teeth and tattoos – the Vikings were not always successful invaders. Displayed beside the Roskilde warship is a grisly reminder that the life of a Viking was a dangerous one. Angry (and probably exasperated) residents of the south coast of England took exception to their Nordic visitors. In 2009, the decapitated remains of 50 Vikings, the crew of an entire ship, were excavated from a mass grave in Dorset.

You may well ask what the Vikings have ever done for us. In truth, they had a huge impact on much of Europe, not least the British Isles. Many everyday English words derive from Old Norse, and DNA research has revealed that a great many Britons, especially those in Scotland and the north of England, are descended from those Vikings who settled there a little over 1,000 years ago. Surnames and place names bear witness to the impact they had on Britain alone.

Although this is an interesting and well-thought-through exhibition, visitor preconceptions of the Vikings may well be the reason for mixed reviews. It can’t be denied that the Vikings earned their violent reputation, but Vikings: Life and Legend takes a cooler, more nuanced approach to these fascinating and formidable peoples without resorting to sensationalism and gimmicks. But perhaps the curators could have pleased both the academics and the schoolboy imaginations of so many middle-aged critics with the occasional reconstruction. The last Viking exhibition held at the British Museum in 1980 featured a full-scale replica of a longship outside the museum’s entrance. Perhaps a similar nod to the child in all of us may have helped to soften the exhibition’s tone. All in all though, well worth a visit. 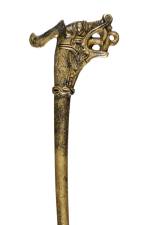 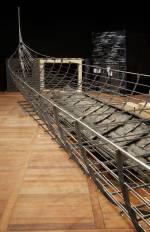 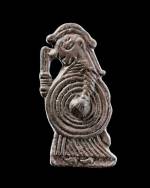