To recreate memories of a father she hasn’t seen since she was a 12-year-old child, the artist turned to photography. Her evocative, grainy images create a narrative that leaves the viewer to guess how much is true and how much false

Screen memories, wrote Sigmund Freud, are those random recollections from early childhood that are either falsely remembered, or elevated in importance in the mind so that they mask other memories, often of greater long-term significance. For her exhibition at the C/O Berlin Foundation, Spanish-born photographer Verónica Losantos (b1984) interrogates the concept of screen memories through a series of photographs that explore her own “screen memories” regarding her father, with whom she has not had a relationship since she was 12 years old. Since she has no photographs from the time they spent together, and finds her memories of him now blurred and faded, Losantos turned to photography to recreate the images she doesn’t have, while simultaneously dramatising and externalising the process of creating her own false memories, 20 years on.

This project won the Talents 2014 competition, an annual award run since 2006 by the C/O Berlin Foundation to promote the work of young photographers and art critics by providing an opportunity for a solo exhibition at the gallery, accompanied by a catalogue (here containing text by Anja Schürmann). Losantos’s evocative, grainy photographs have a vintage feel, shot in 35mm to imitate the analogue style of photography familiar from her childhood. The photographs, Losantos has explained, are staged in three ways: some represent her own vague memories of her father, others are recreations of photographs she knows that he took, and others are imagined situations, memories that are acknowledged to be false. All are interspersed and the viewer is not informed of the veracity of any of these “memories”, leaving us free to follow the loose narrative presented through these intriguing pictures, to wonder which of these images are “true” and which “false”.

Recurring throughout the untitled works that make up the exhibition are images of a man –- assumed to be Losantos’s father – who remains unknowable, his features never discernible. In one striking picture, set in a bathroom, a tiny girl in a red dress stares up in defiant tears at a man, whose suited legs are all we can see: it is unclear whether he is friend or foe. In another, a child balances precariously in bare feet on a man’s laced-up shoes, the camera angled down through their bodies at the patterned carpet, the participants remaining anonymous and universalised.

In other pictures, the shadowy man appears alone, without his daughter: leaning against a cut-off tree trunk, only his legs protrude from the stump, which stands in stark contrast to the willowy forest in the background. The man’s body blends into the stump, the tree’s thwarted potential mirroring the man’s stunted position in his daughter’s life. In another, again headless, the man flexes his muscle at the camera in a show of bravado; elsewhere, he sits in a pub, with a beer and a cigarette, dark glasses shielding his eyes from the camera’s gaze. A poignant diptych of pictures portrays the girl as slightly older, her relationship with her father devoid of the playful intimacy that characterised earlier shots. They sit in the front of a car, the windscreen clouded over to obscure the man’s face. The girl stares silently out of her window, facing away from her father, who holds the wheel in thought. In the next picture, the car is parked: the girl remains in her seat, gazing out of the window towards the centre of the frame. Her father, desolate, sits on the bumper, his back to her and his face cut out of the frame. The sense of melancholy and confusion at this breakdown in communication is palpable, the figures’ loneliness accentuated by the bland background, expanse of sky and the harsh grey surface of the road.

The cumulative effect of these pictures is reminiscent of a childhood photo album: the most mundane and intimate moments are captured for posterity, and given significance by the very fact of having been photographed. Other shots seem to reference this tradition: a child is tobogganing, children are climbing trees, sunlight seeping though the branches. But there is always a dark quality to Losantos’s photographs, which distinguishes them from cheerful family snaps. In one, a child’s outstretched hand holds a bitten peach, a sensory symbol, perhaps, of innocence lost. Several paintings towards the show’s end reference loss explicitly: a dried-up paintbrush and a plain white wall signify abandonment and absence, while the man’s face appears as a large, blurry silhouette, and a suit jacket hangs ghostlike in a window behind a billowing white curtain, casting a deathly shadow. In one image, the girl, now older, lies on a beach; beside her, by the sea, are a man’s discarded shoes. Her reclining figure takes centre stage as the past gives way to the future.

These images cleverly interrogate the documentary role of photography, using a medium often considered inherently factual to create compelling fictions and conjure psychological states, revealing the artistry behind every act of recording and the vulnerability of memory. Throughout the series runs the recurring symbol of white blossom, which gives a surreal and natural quality to several of the images. In the final photograph, the man stands, his back to us, looking up in awe at the trees in full flower; perhaps the delicate petals mark a symbol of hope, or perhaps their pure, cheering bloom is only a figment of the imagination. 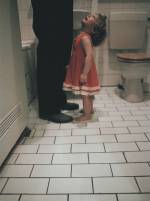 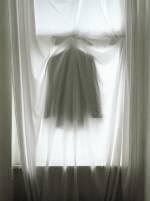