This is her moment. Named Storm King Art Center’s artist of the year, she has just come off a travelling retrospective and is hard at work on three outsize projects. 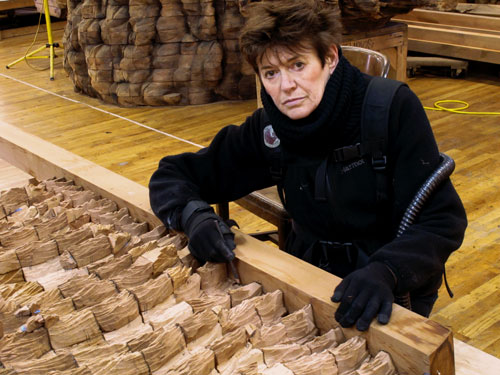 Look out on any big park, over any corporate landscape, and chances are that you’ll see an epic installation by Ursula von Rydingsvard. A sculptor, more closely an artist who sculpts with a circular saw, she has been wresting works out of metals, resins and her signature milled cedar since 1975. Effort is a good part of what she refers to repeatedly as “labour”, a condition of the life she was born into, a farmer’s daughter, in war-torn Poland, before a turn of fortune brought her to America. Daily life as an immigrant was spare – her first art materials were discarded pipes – but she carved out her destiny from her frugal existence with a curious mind, irrefutable talent and staggeringly hard work.

If the only information you had was from articles, it would not surprise that von Rydingsvard spent her early childhood in post World War ll refugee camps. That under those overalls, gloves and mask she is elegant and slight. Or that she is married to a Nobel Laureate, the neuroscientist Paul Greengard. What startles is the work; the volume, urgency and passion of her signature wood installations – bowls, basins and totemic towers that have been hewn, gouged, stacked and grimed then thrust up through the atmosphere or sprawled across land surfaces to dialogue with sky and earth, seemingly for eternity. What shocks is the discovery that these daunting monoliths have been fashioned from thousands of elements by the artist’s own hands, as though Thor had forged Valhalla with his fingertips. As you approach, circle, touch and smell them, even the largest installations belie a tender vulnerability as they appear to bloom and open, inviting you into their inner life – and yours. There is no explaining them, but talking with their maker gives an idea of the process, the dialogue and the effort.

Jill Spalding: You started out as a painter. What brought you to sculpture?

Ursula von Rydingsvard: I felt the surfaces becoming more and more three-dimensional, until they fell off the canvas and led me to where I wanted to be. My life as an artist began in 1973 when I went to Columbia University to work on a Masters of Fine Arts. I was very shy and slow to absorb everything swirling around me.  At that time the minimalists ruled. The artwork was so clean! All those intellectuals, clean, clean! Nothing felt gritty, sexy or emotional. So I began making reliefs out of sewn materials. Then I moved on to metal. I already had a few tools and a circular saw, so I began welding steel plates. But I couldn’t lead them to a place that felt satisfying, I couldn’t get a conversation going or get them to move in the direction of my thinking. Then one day a friend came by with milled 4x4 cedar boards he’d found on sale and left them with me.

Manifestly, the cedar spoke to her; soft, organic and durable, wood works into her skill with a circular saw like the conversation she seeks. What came out of the next thirty-plus years of collaborating with cedar – always cut, roughed up, pieced into a pattern and reassembled – were totemic works, reaching as high as 19 feet or spreading the length of a building, which seared into the national landscape and consciousness.
I ask what inspires her:

JS: Do you have a pre-conceived idea, or a title, in mind before starting out?

Von R: I start my pieces in different ways. Sometimes I need to investigate an idea I’ve kept in my head; sometimes I’ll take discarded chunks from a failed sculpture to see if they have other possibilities. Even with a successful piece, there may be things that I feel I have left incomplete. But I’m glad because it leaves an anxiety in me, to keep on, to reach the peak. And if a piece doesn’t work, I move on. I don’t look at the wood to help me – it’s a stack of 4 by 4s. What does help is when I visit ruins like Palenque and Chichen-Itza – I take in what nature has done to them, the patina, the erosion, and let it wash through me, like a sieve.

What has filtered down is a timeless monumentality achieved from building layers of manipulated wood into archetypal structures that tower or slither or balance in their destined environments. Their extreme texture invites you to touch their rippling surfaces and even, when the elements have been assembled to create crevices and apertures, to explore their very interior. With these, as well as with the smaller works (whose power, it must be noted, gives them a consequence exceeding their size) the touch of the artist’s hand is made manifest by rubbings of graphite or slashes of chalk that convey a sense of profound time, or a long ago conflagration, or messages left by ancient peoples. Where did they come from?

JS: From start to finish, how do you build a work?

Von R: I go to my studio every morning and sometimes nothing comes right away but you reach into yourself. Or I’ll be thinking about something that I want to work out.

The actual process is arduous – “I’m exhausted after a day’s labour”. A day’s labour involves intense concentration on that day’s agenda. If the chosen material is cedar, the boards are hauled in, flung across the floor and sliced into thousands of sections that fit together like puzzle pieces. Now von Rydingsvard undertakes the most effortful part of the process as she saws, gouges, slices and shapes them (her hand movements as she describes each of these moves is an airflight pattern in slow motion) to express the form she has undertaken. Her assistants individually mark, dismantle and glue the cut elements, then reassemble and fix them with screws, clamps or poles to dry overnight. Though the artist hands the heavy lifting off to her team (she considers them family) she climbs the scaffolding and runs her hands over each surface, shaping, grooving and rubbing in graphite to create patterns of light, shadow and mystery.

If the work is site specific, the struggle continues. Von Rydinsvard is comfortable in nature but says it is where she has to be the most careful. “That’s where work can die the most easily. The trees, the sky, the surroundings, can kill it.” She has taken every precaution against such a fatality, having already spent many days in the designated environment, breathing in its message to her. If the work is commissioned by a collector and constructed in situ, she will bring her entire team and descend on the site for weeks - even months. If constructed in the studio, the sectioned installation is piled onto trucks, into elevators and up stairways – each measured within a millimeter beforehand – its very transport could be the subject of a documentary. Even installed, a work is not necessarily finished. With For Paul, she felt compelled to add another three feet – “somehow, it just needed more height”.

To the untrained eye, each of these undertakings seems impossibly daunting.

JS: Which of them proved the most challenging?

Von R: Droga, absolutely. This great creature! I wanted it to move, to curl on itself, to twist and open (her hand-movements follow the memory). As I struggled with it I thought I would lose it, and almost did.

Wood is not the whole story. There came a moment when Von Rydingsvard felt slotted, as though cedar had become hyphenated to her name, and “for reasons I can’t explain” was drawn to another kind of cellular material – animal skin, more precisely, intestines. Stretched over frames, or worked into sacks that drape over vessels, they convey unexpected sensations of maternity, femininity and sexuality. More unexpected is what brought her to plastic – resin, to be exact. Her answer is short, but the investigation was long.

Von R: Resin is more durable, far outliving the 50-year span of cedar. It’s a devil to work with though and very toxic. First I build the entire form out of cedar, then ship it to the Walla Walla factory in Wisconsin, where an exceedingly strong mold is made out of plaster and metal - it’s a huge deal to make it, so much reinforcement! Then I work with them on the exact colour. Each stage of pouring is complicated and uncertain. Finally, braces and a cradle are built to cushion it for shipping across country”.

The same effort holds true of the sand-cast bronze pieces she is working on now. Again the life-size cedar model, again the perilous casting process. It is wondrous, given the intensity and difficulty of each commission, that von Rydingsvard shows no sign of slowing down. On the slate for later this year and through 2015, are a large bronze installation to front the much anticipated Barclays Center in Brooklyn, New York, a large installation for the new Andlinger research center at Princeton University and an extensive retrospective at the famed Yorkshire Sculpture Park in Wakefield, England. Of a fourth project she is up for, she says,: “If I get it don’t know where I’ll find the time!”

You know she will. 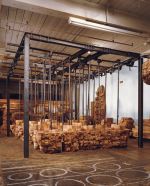 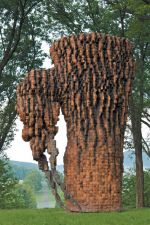 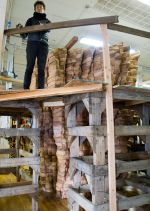