Eight of the eleven works on view have been commissioned for the exhibition; all are displayed together, where they interact in a large gallery with a lofty, eight-metre-high ceiling. The exhibition illuminates and helps to define what it means to live in Kolkata, the third largest city in India. It is a place where, daily, boundaries are being crossed and redrawn. The city served as India’s capital during the British Raj (1858-1947), and for a long time was marked by the grand colonial architecture erected by the ruling elite. After India gained sovereignty in 1947, local officials tore down many of these buildings to clear the area for skyscrapers. In Kolkata, people are living with an ancient history originating from Indus valley civilization, layered with their colonial legacy and seasoned with so-called modernization. Thus, the theme of identity is a rich vein for Kolkata’s artists to mine.

With his cool, refined tone, Sekhar Roy (b1957) takes the onlooker’s point of view in his architectural installation, Skyline. Measuring nearly five-metres high, the installation, consisting of acrylic boxes, is a symbol of ubiquitous high-rise buildings in Kolkata. Within this architectural framework, Roy’s acrylic paintings portray sad, depressed people in silhouette, kneeling and dwarfed by that leviathan of the modern age, the skyscraper.

Referring to the slow erosion of tradition alongside rapid-fire modernization, Roy contends: “The change is only outside on the surface. On the inside, nothing has changed.” While the Asian Development Bank forecasts Indian GDP growth of 6.7 percent for 2013,1 85 percent of the population lives in slums. Under British rule, wealthy landlords, bureaucrats and intellectuals came to Kolkata, and thereby art, culture and universities flourished. Yet India, now the world’s largest democracy, still has an archaic caste system and political corruption is common. Artists like Roy are questioning such disparity and the meaning of modernization when its costs are all too apparent.

Similarly, Snehasish Maity (b1971) reflects on the experience of living in a large city like Kolkata from an observer’s point of view. Maity’s work, Mask,is a sculptural installation in the form of a gas mask, made from an assemblage of plastic bottles. The artist has picked up these containers, which pose serious health and environmental risks, from street venders selling unauthorized polyethylene bottles. Via channel video imbedded in the gas mask, audiences can view footage of streets crowded with auto rickshaws and people eating junk food set against a soundtrack of urban noise.

Piyali Sadhukhan (b1979) offers more introspective narratives of the city. Her work reflects a deep concern for women’s inferior status and social conditions in India. Of the 23-year-old Indian woman gang raped in New Delhi in December 2012 and who eventually died, drawing global attention to an epidemic of such attacks on women, Sadhukhan says: “It could have happened to me.”

As a response, Sadhukhan crafted eight life-size naked female figures for Rather Protecting Dream. For the model, she used her own body cast in fibreglass. Then she covered the figures with Indian Mehndi-like motifs (designs drawn with henna paste) acting as a shield to protect women. Butterflies, symbols of metamorphosis, fly above and away from the female figures towards the ceiling, as if they are signalling freedom. Frequently in her work, Sadhukhan juxtaposes seemingly unrelated images and themes: “Often,” she explains, “society is full of contradiction, [and] unreasonable things.” Some observers argue that Indian men’s resistance to women being educated and gaining viable skills may be causing a backlash. Significantly, Sadhukhan’s female figures are treated almost like warriors, not victims, with solemn and serene bearings.

Adip Dutta’s (b1970) work centres on his personal attachment to daily artifacts - trousers, brushes, trees, etc. – lovingly and painstakingly recorded with pencil. Dutta draws these objects with microscopic detail so that the act of drawing becomes “a torture, or a tyranny,” he states. “But through this painstaking process, I gain a feeling of achievement, I go beyond the object that is represented,” he continues. His approach to drawing is similar to the Hindu spiritual practice of sadhana, in which one may achieve perfection or peace of mind.

Exhibition curator Nanak Ganguly comments: “Contemporary India is at the crossroads of the past and modernity. Art emerging from the region cannot be simply categorized as post-colonial, post-feminist or post-modern but should be looked as beyond –ism.”

Artists from Kolkata, who can draw on a rich and vibrant history, have been overshadowed by the attention received by their counterparts in Delhi and Mumbai. This exhibition redresses the balance, and opens a window on critical artistic issues not only for those who live in post-colonial environments, but for anyone who feels the diverging pulls of a world fast-forwarded to a bright future and recognition of the problems left in its wake. 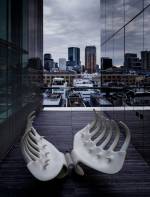 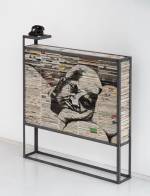 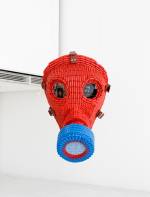 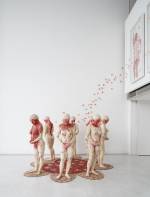