Unseen Vogue, an exhibition shown recently in the Design Museum, London that is also available as a book, is a collection of unpublished photographs taken for Vogue magazine. Sometimes this was because they were just one among many and were simply not chosen, and sometimes it was because they were rejected as being unsuitable - perhaps because they did not fulfil the art director's brief or because they were too avant-garde. And, though most of the photographs date from after the Second World War, what they reveal is the changing attitudes towards fashion and how it is presented - how, in fact, it has fallen from its aristocratic pedestal yet remains glamorous, especially at a time when celebrities seem to have taken over the world.

Thus, the exhibition (and the book) opens with a photograph by an unknown photographer in the late 1920s showing the Marquise de Paris and two of her friends wearing suits by Chanel and ends with a close-up of Angela Lindvall wearing clothes by Gucci. She was photographed by Thomas Schenk in 2001. The latter, surprisingly, is also in black and white. Colour photography, it seems, began during the Second World War and its main effect seems to make the images more intimate and personal.

The existence of the archive from which Unseen Vogue is drawn stems from the fact that the magazine has always retained the copyright to all the photographs it has commissioned - as well as to some happy accidents. For example, there is a photograph showing Cecil Beaton collecting all his prints to be turned into pulp in 1942 in patriotic compliance with a request to help the war effort. Fortunately, though the prints disappeared, many of his negatives did not. Years later, after the death of Guy Bourdin, his life's work was found in shoe boxes and rubbish bags, reflecting his belief that its only value was in the pages of a magazine. In fact, the entire archive of the French edition of Vogue for which Bourdin worked has been lost, believed to have been thrown out as refuse. In Reigate (England) a similar fate almost befell the glass plates taken by Francis Frith, a leading photographer of the second half of the 19th century. Fortunately, someone recognised the plates for what they were before they, too, vanished.

Unseen Vogue is based on images that were rejected. Clues are given in an introduction by Alexandra Shulman, editor of British Vogue, who begins by noting that, in the past, art editors were given an enormous choice of images presented on contact sheets or as transparencies whereas today the normal practice is for a photographer to offer only three or four images. The past was also notable for the fashion scene being dominated by a few fashion houses, while today individual designers have become important. But one factor has not changed: as in the past, Vogue works with a small number of photographers; and, as in the past, the relationship between the magazine and its photographers can sometimes be stormy.

There are letters between Cecil Beaton and the then editor of Vogue, Audrey Withers, about her decision to 'kill' his entire photo shoot in 1955 on What to Wear with What (Beaton did not know how to select accessories) as well as on the difficulties of using John Deakin, long-time friend of Francis Bacon, at about the same time. Reports of crying models, collapsing tripods and lost or pawned cameras eventually led to his sacking. There is also a letter to David Bailey in 1960 offering a contract so long as he did not work for Harper’s Bazaar or Queen.

Indeed, the value of the book on Unseen Vogue is the enormous amount of information contained within its short chapters and captions. We learn how Condé Nast, founder of Vogue, sacked and then reinstated Horst in the 1930s, as well as how Condé Nast rescued Lee Miller from being run over in New York and then published her photographs during the Second World War.

What Unseen Vogue does is to establish fashion photography as a valid subject to study - to give it its proper place in the canon of photography where, it seems, it has often been regarded as lesser art form than photography concerned with portraiture, landscape, documentary and the female nude. Obviously, fashion photography also touches upon these areas, since many fashion pix focus on the face and include land- and cityscapes; Cecil Beaton's shots of land girl fashion, and Lee Miller's of fashions in Paris following its liberation from the Germans, provide wonderful documentary evidence of life at that time.

The other change relates to the models themselves. In the past, they included Royalty (Princess Margaret, for example, posed for Cecil Beaton in 1949), film stars and ballerinas (Marlene Dietrich, Vivien Leigh and Margot Fonteyn also posed for Beaton, and Unseen Vogue also features Ursula Andress, Raquel Welch and Angelica Houston), writers (there is a wonderful shot taken by Horst in 1946 of Gertrude Stein with her poodle looking at a model wearing a Pierre Balmain dress) and numerous aristocrats. But the arrival of Jean Shrimpton (photographed by David Bailey and Helmut Newton among others) and Twiggy (photographed by Just Jeackin, also in the 1960s) changed all that.

Today, models like Naomi Campbell, Kate Moss and Sophie Dahl are as famous as anyone else while, as Unseen Vogue also shows, occasionally the photographer herself turns model, as in the case of Cindy Crawford. Even so, besides the standard props, fashion photography continues to display the tension between the creative and the practical, the dreamworld and reality, and the inspirational and the bottom line. 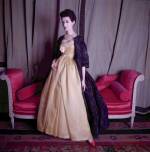 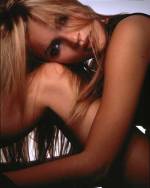 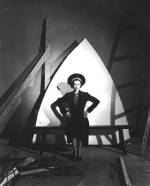