Thomas Allen: ‘I want my cave to offer an escape’

Thomas Allen: ‘I want my cave to offer an escape’

Thomas Allen talks about his background in sociology, how his latest work relies on the scribbles of perfect strangers – and why termites are so fascinating

Janet McKenzie: Your stated aim in London over the next month is to create a portrait of the community, through a method of contemporary cave painting. Can you explain how you came to use art to explore the collective unconscious?

Thomas Allen: I’ve been interested in emergent phenomena – phenomena that arise from the interaction of a multiplicity of individual units – for a while now, whether it’s the way thousands of termites conspire to create what is an incredibly complex structure, a termite cathedral; or the way a number of essentially abstract marks come together on a piece of paper to form a recognisable representation of something. Then, a few years ago, there was a gallery having renovation work done on the outside of the building, so they decided to offer a residency opportunity during which an artist would be given free rein to do with the space whatever they pleased. I immediately imagined filling the space with imagery, using the walls as my canvas, which, naturally enough, got me thinking of cave painting – contemporary cave painting. My interest in collective phenomena then inspired the idea of representing, on the walls, the collective unconscious of the neighbourhood. But how to tap into that collective unconscious? The answer came from surrealism: automatic drawing. I use this method to tap into individuals’ unconscious and then amalgamate those to get some idea of the collective unconscious. I didn’t get the original residency, but I was so enthusiastic about the idea that I had to make it a reality some other way!

JMcK: The route taken to your art practice has been informed by the study of sociology (and economics) at the University of Exeter rather than conventional art school training. Has this route given you more confidence to observe the artist’s place in society?

TA: I remember sitting in a sociology lecture that addressed that very topic and at the time I fervently – and perhaps rather egotistically – argued that, in the art world, the artist is the central figure and everyone else – paint suppliers, gallerists, and so on – played a secondary role, sort of dancing around them. I was in love with the romantic notion of the solitary artist feverishly working away regardless of the world around them, and even of their own personal needs – warmth, food, society. I’m glad to say, though, that I’ve since moved away from that thinking! More and more, I’ve come to recognise my own position within a matrix of other individuals on whom I rely – those paint suppliers, those gallerists. And perhaps in some strange sort of karmic twist, my contemporary cave painting projects now rely almost entirely on the input of others – their scribbles. I absolutely could not do what I’m doing without them.

JMcK: Before the start of the cave painting you carried out research in Fitzrovia, the area in London around the Rebecca Hossack Gallery. What do you expect to draw out from the individuals you approach?

TA: I have no idea. I try not to “expect” anything. It’s important that I try to remain as open, receptive and unbiased as possible. For instance, some people, when asked to do a scribble on a piece of paper, can’t seem to help but do a representational drawing of something in particular – a snail, a house, a penis. That’s fine. I accept that. It still gives me some insight – so long as I remain open to it.

JMcK: Your first experimental and performative artwork, if one can call it that, took place at the Fabrica Gallery in Brighton last year. What did you feel you learned from that experience and how was the work received?

TA: I found it to be hugely mind-opening. Prior to that, I’d been used to sitting alone, hunched over a piece of paper, doing very intricate drawings and watercolours on a small scale – no larger than A3. Suddenly, I found myself working across an entire wall in a different medium and under the scrutinising gaze of the public. My work became performative. At the same time, it also became an installation – which requires a lot of planning in advance. And, as I’ve mentioned, it was now highly collaborative; having to approach dozens of perfect strangers on the streets to ask them for scribbles was quite daunting. You never know how people are going to react, and so it’s easy to imagine the worst. But, thank goodness, I wasn’t spat on or shouted at. On the contrary, people were very receptive and willing to participate. Those who visited my cave received it very well, often taking the time to share their interpretations, ask questions, tell stories – and I even got some free cookies and homemade charcoal. All in all, it was such a rewarding experience, not only because I came away with a strengthened faith in humanity, but also because the project spoke to such a wide range of people. My cave received newborn babies and elderly folk, schoolchildren and people with special needs – all of whom contributed to, and brought something away from, the project.

JMcK: You have identified the beauty of a single bird in flight in relation to the amplified experience of witnessing hundreds of birds in flight, as an allegory for the relationship between individual and collective experience. Can you explain this notion further?

TA: At the crux of it is the disparity between the micro and the macro. How do you marry the two? It’s a big question in sociology, as well as other fields, such as physics. On the small scale, individual units display certain behaviours and seem to act in accordance with particular “laws”, yet when brought together into large groups, these units seem to combine into a super-unit, from which there emerge phenomena that follow a different order of behaviours. So, to take a different example from the birds, individual termites perform very simple tasks, carrying dirt from A to B. However, bring thousands of them together, all performing those simple actions, and they create a termite cathedral, which is hugely complex. And the complexity of that structure cannot be reduced to those simple actions, which is to say, if you were to observe just those individual actions, you could not predict the complex structure that they were going to create – it’s of a different order. So, all I’m trying to point to with these allegories of birds and termites is that these two different levels – the micro and the macro – seem to be incongruous, and yet they’re clearly united as one. The relationship between the two is mysterious. It’s intriguing. It’s beautiful.

JMcK: You incorporate the unconscious scribbles or unconscious expression of random individuals in Fitzrovia with your own observations of the area. What forms have you identified as epitomising the area that will make your work specific to this part of London?

TA: Well, you’ll just have to wait and see … Largely, because I don’t even know yet myself! I have no plan for the walls. The imagery will emerge spontaneously and organically over the course of my residency. It will be informed by the scribbles provided by the public as the project progresses. However, from the scribbles I’ve collected and observations I’ve made so far, one thing has begun to emerge. I feel that if Fitzrovia were to have a dream, it would quickly turn into a nightmare. Fitzrovia would dream of an idyllic rural setting being consumed by urban sprawl. That sense may be undermined or it may be reinforced over the coming weeks – we’ll have to wait and see!

JMcK: As a self-taught artist, which artists, historically, have you most admired and been influenced by?

TA: There are a few and they’ve changed over the years, but perhaps the most influential has been Gauguin. I’ve loved his work for a long time, and I still do. I’ve found it to be a helpful guide in finding my own voice as an artist. A couple of years ago, I started an oil painting that was heavily influenced by Gauguin’s work but, when I was two-thirds of the way through it, I had to stop painting. I didn’t return to it until a year later, by which point I felt I was finishing another person’s painting – I’d moved on and developed along my own path since then. So, it became a sort of parting tribute to Gauguin. Its title, Never Never Far Away Away, is a kind of combination of two of Gauguin’s titles: Nave Nave Mahana and Faa Iheihe. The piece will be on display at the Rebecca Hossack Gallery (in the front room) during my project.

JMcK: Which contemporary artists do you most admire?

TA: Immediately, I think of Chris Ofili and Peter Doig. I’m drawn to the oneiric quality of both of their work, and I also enjoy some of the geometry and patterns in Ofili’s work.

JMcK: It is most fitting that your contemporary cave painting is being staged in London by Rebecca Hossack, as hers was the first gallery since the 1980s to champion Australian Aboriginal art in Europe. Has your own work been directly influenced by Aboriginal art?

TA: Unconsciously, perhaps for a while. Consciously, not until recently – since being introduced to Rebecca’s Aboriginal works and admiring them in the flesh, I have begun to feel inspired by them. When I look at them, I feel potential ideas beginning to bubble away in me … Perhaps some of it will surface in my cave …

JMcK: What do you hope the experience of your cave painting will be for the individuals who visit it?

TA: The space is intended to become a receptacle for the collective unconscious of Fitzrovia, and it is in that sense that I increasingly find myself inclined to call my cave a “church of the social self”. Carl Jung spoke of churches as places that protect people from the full force of the collective unconscious: rather than being gripped by it, they can “participate in a ritual which expresses it sufficiently to ‘purge’ by its reflection”.1 And so I want my cave to offer an escape – even if only a brief escape – from the hustle and bustle of London into a calm, reflective and even meditative space where they can perhaps turn inwardly and get a sense of their connection with others. I want people to interpret the imagery freely and perhaps even see how those interpretations reflect their own inner state. People are also welcome, though, simply to enjoy the spectacle of me covering my darkened cave with imagery by the light of a handheld lamp!

Reference
1. From An Introduction to Jung’s Psychology by Frieda Fordham, published by Penguin. 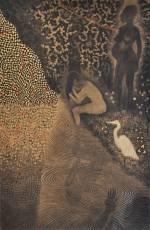