War in Abkhazia in 1992-93 resulted in deaths, displacement and the loss of its national archive, wiping out centuries of material. In this exhibition, film-maker Sam Jury, composer Rob Godman and poet Anton Ochirov dig into conceptual notions of a ‘post-conflict’ scenario 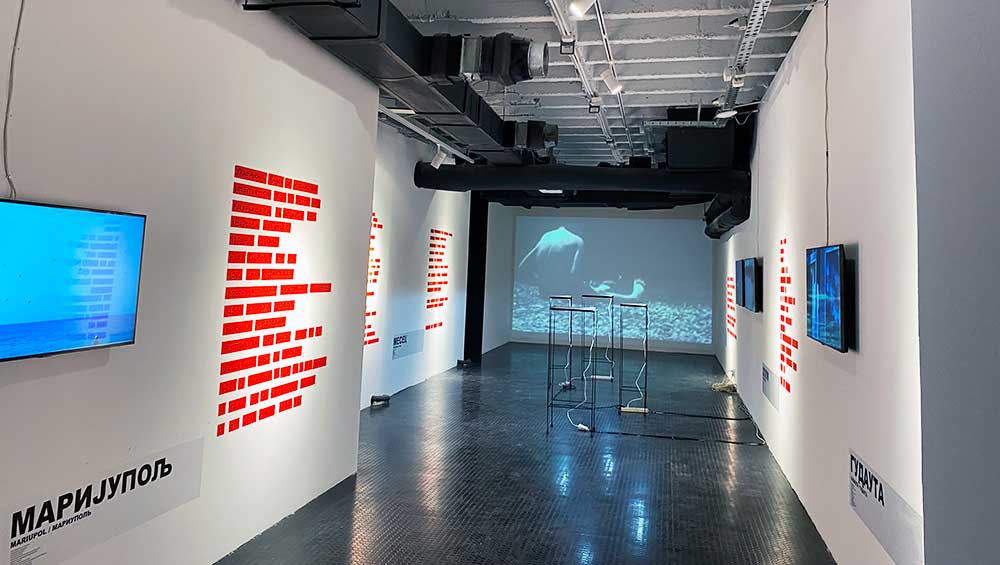 I am here, on my first visit to Serbia, to review an exhibition at the Cultural Centre of Belgrade [KCB]. This is a multidisciplinary contemporary art space, occupying two floors of the stunningly modernist former House of Print for the Socialist Federal Republic of Yugoslavia, built between 1957 and 1961. It forms a stark architectural contrast to the Serbian National Museum and the Serbian National Theatre, both 19th-century buildings, located on the other side of Republic Square, a major gathering point within Belgrade.

The exhibition I have come to see features Sam Jury, a Cambridge-based visual artist who works with film, images, sound and text, and a poet, Anton Ochirov, who has lived for many years in the de facto state of Abkhazia, situated on the febrile faultline between Georgia and Russia, on the eastern shores of the Black Sea. Collaborating with Jury on the score for her work is the sound artist Rob Godman, a colleague of Jury’s at the University of Hertfordshire, in England. Jury’s highly textured, hauntingly atmospheric, shimmering, audiovisual film triptych, amplified by the addition of Godman’s ambient score that mixes different audio files together in the spectral domain, conjure up a sense of what occurred in Abkhazia in August 1992, when the reality of an encroaching war first invaded the seeming “normality” of restful summer days along its notoriously scenic coastline. 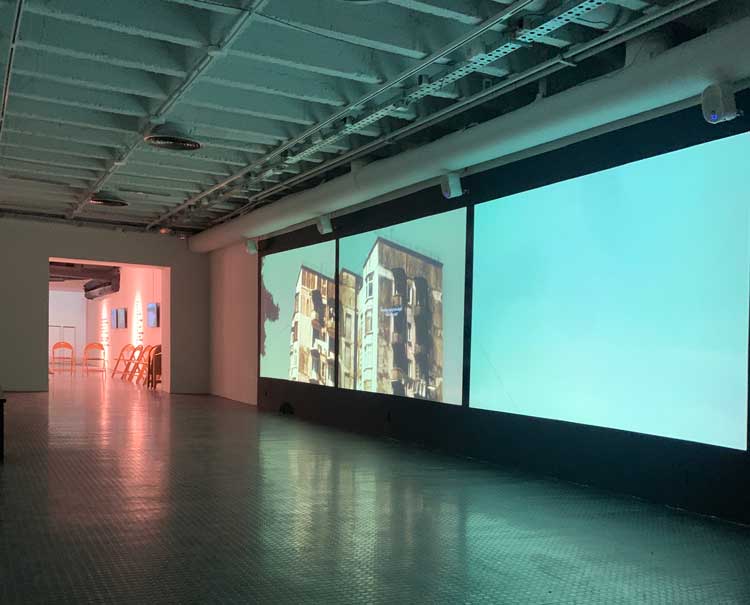 Renowned for its mountains, lakes and sub-tropical climate, Abkhazia was an autonomous republic inside Georgia during the existence of the Soviet Union. It was the place where numerous Communist party officials, including Josef Stalin, came on vacation and maintained holiday homes. After the dissolution of the Soviet Union in 1989, tensions mounted within Abkhazia among competing factions.1 A year of intensive fighting between Abkhaz and Georgian forces in 1992-93 resulted in the violent deaths of thousands and the displacement of hundreds of thousands of people. Abkhazia was subsequently expelled from recognition by the majority of international governments (with the exception of a handful including Russia and Venezuela). It is still a terrain that the British Foreign Office advises its citizens not to visit.

Nonetheless, in 2017, Jury successfully applied for an artist in residence opportunity circulated by Asida Butba and her associates within SKLAD, a cultural institute set up in 2015 in Sukhum, the capital of Abkhazia. The call issued by SKLAD for artists to come and work there was prompted by a sense of the importance of a loss that occurred in 1992, with the deliberate destruction by Georgian forces of the Abkhaz national archive. This wiped out centuries of historical material, leaving little for those who remained to work with. Jury’s countering approach was to reinvest the initial memory of rupture with a sense of attention and attentiveness, given that accounts of Abkhazian experience over the last 30 years have had little visibility in conventional media channels. 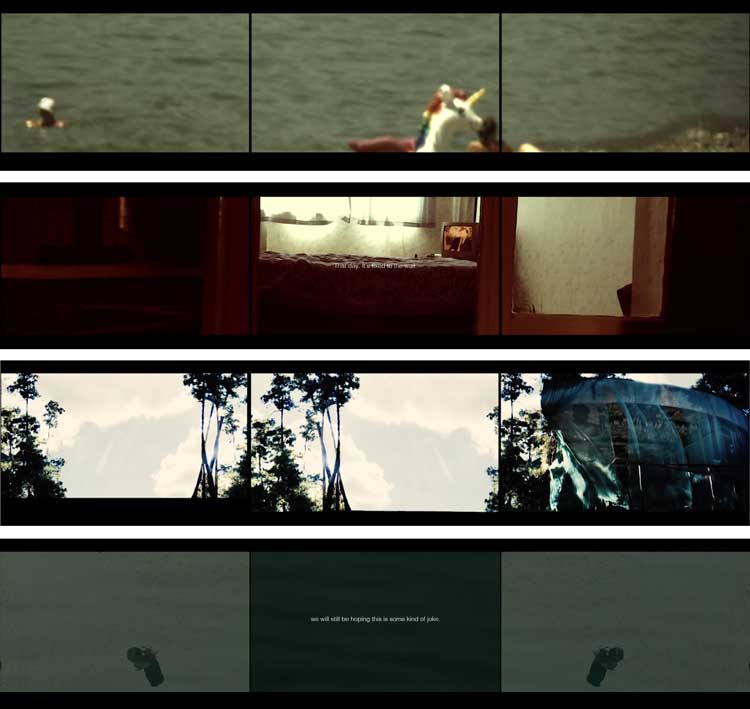 
Writing in her catalogue essay as curator of this exhibition, Butba has reflected on a scenario, where despite a seeming military victory in the mid-90s: “We in Abkhazia found ourselves in an endless stasis, with only rare outbursts of life here and there […] Whatever seems to be standing still is often slowly collapsing.” The fractured sense of reality conveyed sonically and visually by the installation comes directly out of Jury’s direct experience of the context, both with respect to the deterioration of the built environment, with the encroachment of natural and organic elements into the ruins of former habitations, as well as her encounter with people who shared a first-hand sense of rupture that they psychologically and emotionally retained from what took place three decades earlier. Heightening and negating sound and visual imagery at different points in the installation, Jury (and Godman) probe and dig into conceptual notions of a “post-conflict” scenario, within which events of the past appear to be recursively present. This is what Butba infers in the catalogue is a conjunction between the work’s “politics of remembering” and the same condition that is integral to the formation of the Abkhaz state.

This is also what Jury seeks to capture within the textual dimensions of the three-screen installation. In the middle screen, we see thin, distilled lines, in English and Serbian languages, that speak of a compression of a rawness that still remains felt. What is being voiced is a condition of uncertainty that has not yet fully registered; we hear one interviewee, for example, relive the moment where he found out that the colleague he expected to see the following day “is already dead”. Others remember a state of disbelief: “no one wants to believe the worst” and of horror: “Just let it be over, just let it stop.” 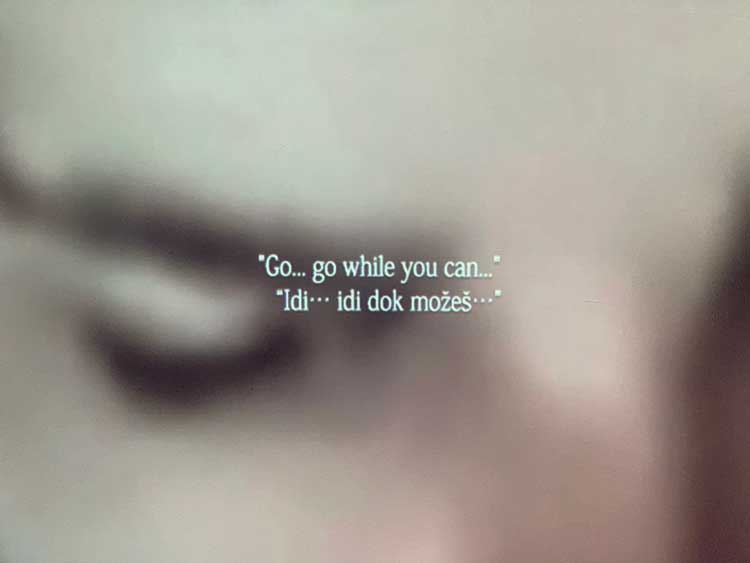 Finding a form and structure, as well as a spoken and visual language, through which to transmit the narratives she had encountered in Abkhazia became Jury’s task in preparing for the exhibition. The production period included months of lockdown in a pandemic scenario that added another level of truth to its thematic thread of disrupted normality. Hoping to visit Abkhazia again this year, Jury found herself unable to do so because of the restrictions on travel in place due to the war in Ukraine.

Creating what she has called “five chapters”, that run for 40 minutes in total, Jury gives space and time to the words of her interviewees, then turns her penetrating eye to witness the material ruination of symbols of constructed human power strewn across this landscape: what were holiday homes and pavilions are now sites of vegetal expansion, with trees growing through floors and roofs that have been abandoned to non-human elements. Heinrich Böll’s post second world war concept of an aesthetics of ruins and a trümmer [trauma] aesthetic comes to mind. Yet Jury offers little direct explanation of causality or interpretation: the complexity of the political backdrop is left understated. 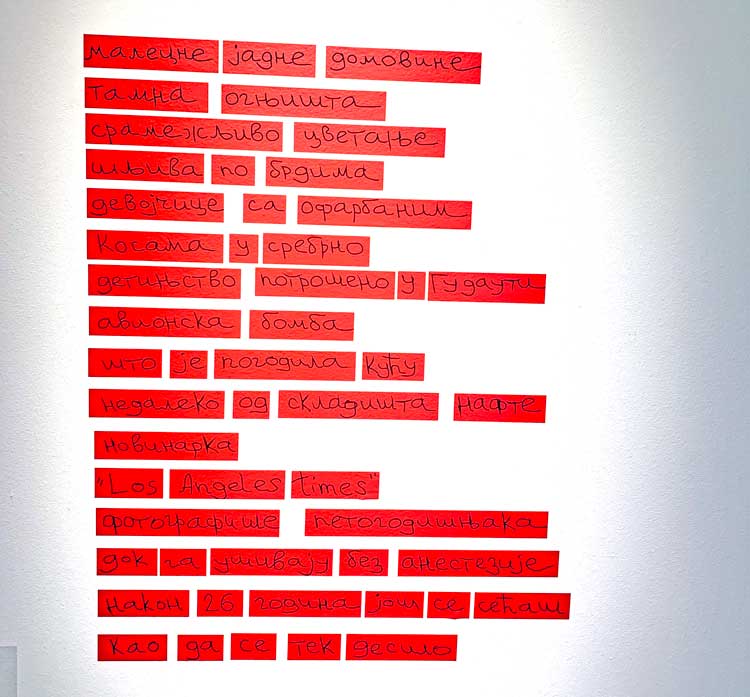 
Relatively more direct are the poems in the second room of the exhibition, by Ochirov, who has lived in Abkhazia for more than a decade. His poems are laid out on the walls in red lines. They convey an empathetic poetic sense of war’s spilling over into multiple locations, from Kabul to Mariupol and elsewhere. As Butba notes in her catalogue essay, “trauma and violence take stage in multiple geographies”, images of which we increasingly receive by satellite pictures and Twitter feeds. 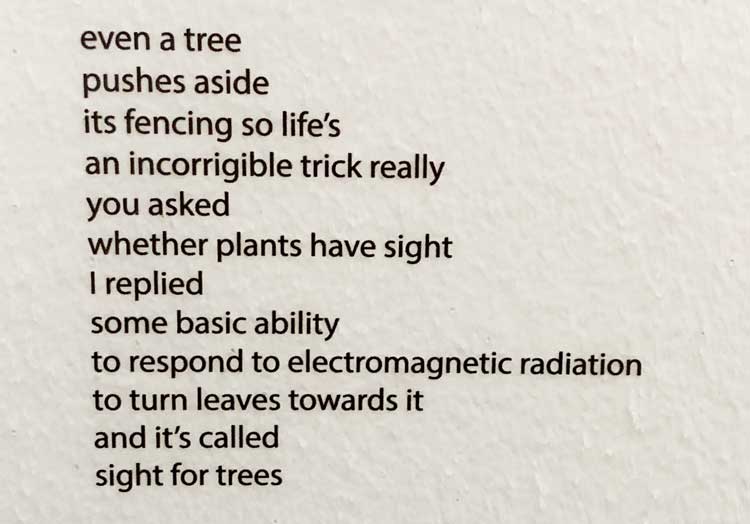 
By coincidence, over the course of this year, the two cities in which this exhibition is now installed – Belgrade and Istanbul – have become key routes of exit for many people fleeing from Russia, for whom the war in Ukraine has become a burning issue. Indeed, the majority of those who attended a public discussion forum on the afternoon after the exhibition opening were artists, curators, film-makers, coders and writers who had left Russia in haste. All echoed the point of view expressed the opening of her essay where Butba had stated: “Whilst writing this piece, I am experiencing a lot of personal anxiety that comes from the escalation of Russian aggression in Ukraine, leaving long-remaining scars and devastation all over.”

This is the voice of personal experience, of a cultural activist who has sought to define a space for a new language within a terrain that is still caught in what she has, after Lacan, described as a “debilitating circle of self-repetition”. This has a truthfulness that matters beyond the parameters of Abkhazia, as does the highly affective work in this exhibition generally, that catalyses a remembering of trauma and its long-term, often hidden, effects on human memory. Like its current venue in Belgrade, the exhibition takes effect on multiple levels. Certainly, it deserves to also be seen elsewhere.

Reference
1. This is expanded at the Carnegie Europe website