‘The two Roberts’, as they were known, became a sensation, feted by London galleries, but then they faded from prominence and both died early. The thrill of this exhibition is that it brings their legacy back to life

Posterity comes too late to offer much comfort to artists. The romantic legend of Vincent van Gogh cannot hide the fact that the painter died believing he was an abject failure, having sold only one painting. Even when a legacy of critical acclaim seems assured, there is no guarantee that the world will not simply move on when an artist has passed away. Once revered by Oscar Wilde, Paul Cézanne and Van Gogh, the work of Adolphe Monticelli has largely slipped into ridicule and obscurity. For every Rudolf Bauer or Jay DeFeo, Janet Sobel or Grégoire Michonze rediscovered, there are a thousand artists who have yet to surface and perhaps an equal number who may well slip below.

Partners in art and life, Robert Colquhoun (1914-62) and Robert MacBryde (1913-66) were once highly regarded in British art circles. Both hailed from working class backgrounds in Ayrshire, Scotland. Having met at the Glasgow School of Art in 1933, they quickly became inseparable. Often referred to as “The Two Roberts”, their paintings were as much a form of mirroring as their personalities; MacBryde was the gregarious charmer, Colquhoun the brooding introvert. For a time, they were a sensation, feted by galleries and patrons; “the golden boys of Bond Street”. Both were exceptionally talented and both were destined for early graves.

Somehow the Two Roberts faded from prominence just as their compatriots Francis Bacon and Lucian Freud were ascending. The reasons for their eclipse are puzzling and messy. In later life, the pair had fallen into alcoholic disrepute, yet there is a distinct sense of neglect, too, an injustice that this exceptional revival at the Scottish National Gallery of Modern Art goes a great way to address.

The particular brilliance of the art of Colquhoun and MacBryde lies in the paradox of seeming strangely recognisable and unearthly at the same time. The pair absorbed influences from the heady days of modernism such as Pablo Picasso and Georges Braque, Amedeo Modigliani and Wyndham Lewis, as well as other earlier influences such as Samuel Palmer, and forged them anew. The cubist appropriations of African masks become startling altered in MacBryde’s neo-primitive Woman with Paper Flowers (1944), as does the childlike dynamism of Colquhoun's Puppet Show, Modena (1950) and MacBryde's Man with a Melon (1952).
.
It could be said that Colquhoun and MacBryde quickly developed a style that was immediately identifiable as theirs, almost trademark, were it not for the fact that their paintings are so eccentric and enigmatic. Fragments of classicism and romanticism are recast in a deeply haunting light in their work. Colquhoun’s Grieving Women sketch (1944) is remarkably timeless; it could be a Sophoclean tragedy or an existentialist one. The characters are brought to life by being drained of life. The dehumanised features seem more masks than portraits and yet are all the more resonant because of this. There are clear signs that the artists were a bridge between the distorted honesties of Picasso and the warped eviscerations of Bacon. Yet there are older Celtic and even monastic influences at work; the animal-headed evangelists in the Book of Kells, for example, cast a long shadow.

In their portraits, the sympathies of Colquhoun and MacBryde are intrinsically with the poor. Yet the paintings are vastly different from the traditional realist approaches of the likes of Gustave Courbet or the Ashcan School. The sense of mystery they instil is almost symbolist in nature. Their monotypes of Irish peasants incorporate unlikely influences from further afield. Colquhoun’s Two Irish Women (1946) could be likened to a Massai carving while Irish Peasants at a Church Gate (1946) would not look out of place alongside Die Brücke woodcuts. There is empathy evidently, even solidarity, but also the curious dislocation of the gaze.

Occasionally the pair seem to appear within their paintings. Subjects are often dual figures; versions of themselves in metamorphosis, always frozen in some attempt at connection. The Students (1947) seems the closest to reality, but even this maintains an elusive poetry. They are there, but as two-dimensional shades and only in the glimpse of private moments. The most abiding aspect of reality is in the atmosphere of the works. Colquhoun’s tendency, at least since the second world war, had been to slip into bleak periods of morose contemplation. It brought a sense of alluring desolation to his work that was also potentially disastrous for his life. While not entirely to the contrary, MacBryde’s art maintained a vivaciousness, often seen in his still-lifes. Even this cannot quite dispel a haunting mood, “a sombre statuesque quality giving the viewer a chill feeling that they were viewing ghosts from some long forgotten tragedy,” as their biographer Roger Bristow puts it in The Last Bohemians.

On the surface, their techniques are dehumanising ones. Removing the eyes from their subjects results in a loss of connection between the viewer and the viewed. Identity, gender and a degree of spirit dissipates. Yet this very act makes the portraits all the more affecting. The characters seem frozen and lost. We are drawn nearer to them, to understand why this is so. It could be said that the figures they portrayed are presented as the saints or gods of some ancient lost religion, populating the bars and studios of London. What they remind us of is that every individual is, to varying degrees, an enigma. Through dehumanising, the Two Roberts have refocused our attention on what it is to be human.

Given their remarkable views of people, it would be easy to miss their astonishing depictions of animals. Indeed the two worlds, and the figures therein, overlap. The porcine sketch of Man and Pig (c1953) seems satirical, Orwellian even. Colquhoun’s cat in Young Woman with Cat (1946) looks simultaneously alive, dead and skinned; inanimate and mysterious as a hieroglyph of the Egyptian cat-god Bastet carved on the wall of a tomb. The attendant human figures could be Aztec or Inca by comparison.

It would be easy and facile to emphasise the tragedy of Colquhoun and MacBryde. The memento moris are certainly there; there is melancholy even horror in Colquhoun’s Woman with Still Life (1958). The repeated lightless eye sockets, the rigid poses, the muted colours and lighting all suggest dark currents. Yet these artworks are records of living not death. Their scenes may be static, but they are social, even operatic at times. Their symbolism may occasionally be fatalistic but they possess totemic powers beyond morbidity; the hints of Christian iconography in MacBryde’s Still Life: Fish on a Pedestal Table (c1946), for example. Their styles may be sombre at times but they are expressed in a dazzling experimental array of methods from lithographs to watercolours to costume designs for King Lear. Their intertwining voices are as much a harmony as a dissonance.

Looking back on lives via the prism of untimely deaths (Colquhoun effectively drank himself to death, MacBryde was knocked down outside a Dublin pub where he had been drinking with the poet Patrick Kavanagh) can have a distorting effect. Darkness and fatalism is seen always and everywhere, often when they played no part at the time. Their years of drink and carousing in Soho and Fitzrovia certainly acted as a catalyst to the demise of the Two Roberts, both in lives and reputation. They were ill-served, not least by themselves, self-destructive and wilfully alienating support, to the extent they were reduced to bartering art for drink. This was, however, their choice. There were no shortage of glories in their foreshortened lives and careers, and notably little diminishing of talent in later years; Colquhoun’s late monographs are astonishing, almost Afro-futurist works. Their figures are always at the point of interacting, even when stationary or in mourning. Full of depth, secrecy and dignity, they are inviting, unfinished and somehow alive, just as Colquhoun and MacBryde’s legacy thrillingly proves to be. 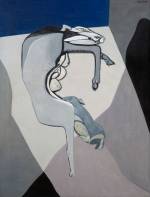 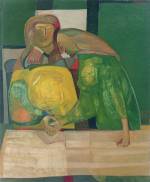 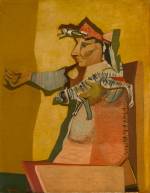 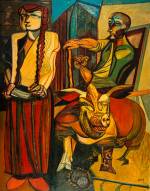 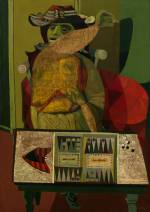 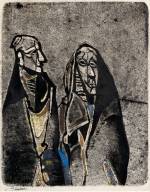