There is major significance in Seymour Slive's excellent exhibition currently showing in the Sackler Galleries at the Royal Academy, London. Jacob van Ruisdael's star is rising dramatically. Partly, this is on account of the general appraisal of the whole idea of landscape as an intellectual and natural phenomenon, to which I will return later. But it is also, in part, due to the extent to which van Ruisdael as an artist has been found to have qualities much valued in the past 30 years. Prominent among these is a scientific attitude to natural phenomena, as well as to the variety of trees and shrubs that he accurately depicts in his paintings. Indeed, Seymour Slive is careful to point out how he even pre-empted the Swedish botanist, Carolus Linnaeus, being alone in depicting a rare plant from the locality of Haarlem that the former had missed on his own research visit during the subsequent century. Despite his precocious youthful talent and steady curve of success and acceptance as a painter, much of the detail of his career remains enigmatic.

Van Ruisdael remained always firmly rooted in his homeland, and seems never to have been drawn out to visit sunnier climes. He remains the artist who before all others did most to develop the art of 'landskip', itself adopted in English from the Dutch as a painter's term at the start of the 17th century. Other ingredients were also adopted, such as waterfalls and watermills (which were to enthuse Constable a century later), but it is in capturing the reality of total natural landscapes that van Ruisdael came to excel. There were only gradual changes in the waterfalls, which became less dramatic as his career wound on, emerging into calmer pools: wooded landscapes became 'even more open', in Slive's words. In his final phase of development, trees became thinner and more diffuse, acquiring 'an unmistakable lessening of grandeur'. 'However,' as Slive points out, 'they gained a pastoral intimacy, and many attain a new poetic quality'.

There are many welcome surprises in van Ruisdael's work. One such is the scene from central Amsterdam (late 1670s) entitled 'The Dam with the Weigh House at Amsterdam', on loan from the Staatliche Museum, Berlin. Here, numerous figures disport themselves around the square, in the full flush of bourgeois affluence. The varied colouring of the robes, the fall of soft fabrics, the conversational yet natural set pieces, and the elegant civic buildings, seem to pre-empt all that Canaletto subsequently came to achieve several decades later.

So many of Jacob van Ruisdael's landscapes are static depictions of a recognisable status quo that his paintings of rough sea catch us unawares - full of movement and spray, one can almost feel the sting of salt as it hits one's face. These marine paintings seem to provide the artist with a welcome release from leaves and branches, until we realise, too, that the curl and wash of the waves is treated equally as a natural phenomenon. Such paintings were less frequent, coming at intervals during his career, as if to remind the Dutchman that his territory is not landlocked, but always close to, and threatened by, the sea. It is in the remarkable accuracy of his arboreal depiction that van Ruisdael is in a different class from all others, including Poussin, Claude and, later, Gainsborough and Constable.

Nor should we forget that van Ruisdael came from a different social landscape. Mr and Mrs Robert Andrews, as painted by Thomas Gainsborough (c. 1748), occupied an English landscape, where class, from the division of the land by enclosures, to the landed gentry, was rigid. In Holland in the 1670s, society was much closer knit, and the bleaching fields of linen were something to view with pride on a walk around the city on Sundays.

The exhibition comes following showings in both Los Angeles and Philadelphia. Yet it is remarkable how, prior to this, van Ruisdael had seldom been accorded the accolade of a one-person show. The saleroom activity in London in the later 18th century and the 19th century was perhaps part of the general increase in interest in landscape and garden design following Lancelot 'Capability' Brown. Today, in the latter part of the 20th century, has come a new quest for clarity in understanding the current and future representation of landscape. Increasingly, and especially since the land artists Richard Serra and the late Robert Smithson, as well as the English land artist Richard Long, we have come to view 'landskip' in a wholly different way. The Picturesque, indeed, was, itself, something to be abhorred by these artists, and they took evasive action against ever being so represented. Now, the aesthetic of the Sublime has exhibited a renewed currency, more readily transferable into land art and installation art. We could say that it all began with the 'landskips' of Jacob van Ruisdael. 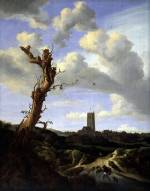