The story of K&M

The story of K&M

Despite the fact that Vitaly Komar and Alexander Melamid have already become world-class stars, they do not forget Russia and regularly bring new exhibitions to Marat Guelman's gallery. Mass media regard Komar and Melamid as heroes; they are also worshipped by leftist radicals from the Radek group. However, they have already lost their romantic status of dissidents and emigrants without any possibility of returning home and have become simply Russian classics residing in New York.

This time they brought to Moscow their old discovery, namely an 18th century conceptualist — Dmitry Tveritinov who had painted an icon bearing the Second Commandment: 'Thou shalt not make unto thee any graven image' instead of a picture. At the exhibition one can see the artists' reconstruction of most ancient conceptualist's activity — a black square with an inscription in Slavic characters, and beside that some photographic images of archive documents. The design is quite comprehensible, since the mass consciousness believes that image is replaced by text in a conceptualist work. Exhibition of such kind is only possible in Moscow, where the broad masses have a most profound understanding of Nikeian synod’s decree about Orthodox worship of icons. However, I remember two other characters discovered by K&M in their time. The first was a 18th century serf abstractionist, Apelles Zyablov. The second is Nikolay Buchumov, a one-eyed realist from the 20s, who painted landscapes in which, in accordance with realist theory and practice, the artist’s nose was inevitably present. Now, after the discovery of 'first conceptualist', a new conception of history of art is completed: Tveritinov, Zyablov, Buchumov. The story has a fantastic end with elephants painting and Mickey the chimpanzee taking photos of Red Square. In the middle of this genealogical tree, there are K&M themselves, who once wrote on the door of their Moscow studio 'Well-known artists of 20th century seventies'. Even sots-art, their invention, was a pure simulation of a 'real' social realist artist who, owing to absolute imbecility, just brought all the ideological directives to a logical end. Such actions are called 'appropriation' in postmodernist slang.

But one must understand that artists Tveritinov, Zyablov and Buchumov also appear at the exhibitions of cunning artists Komar and Melamid. Even their international project of artistic utilization of Soviet sculpture under the title 'Monuments: Transformation for the future' should be regarded as Komar&Melamid's individual action. I mean to say that Komar and Melamid became famous in the course of decades of playing tricks on decent people’s minds. And now, even if they are willing to tell us something serious about some positive values and other stuff, no one is going to believe them, anyway.

But the strangest historical projection to appear at the new Moscow exhibition is concerned with global fluctuations of time. The simulated character under the name of Komar&Melamid is gradually becoming a historical object himself, preventing us from seeing good old fellows Alik and Vitalik, as they're commonly called in Moscow. Under the moire shrouds of postmodernist speculations, true historical reality is becoming apparent. The text appearing at the exhibition no longer contains that usual cold manipulation with time and space. It tells us that the idea of ancient conceptualist’s existence dawned upon artists' heads in the 1970s, during the times of Cold War and struggle for freedom of art. 'We recall so vividly those Moscow underground workshops, with their foreign visitors and late night disputes, warmed up by our youth and vodka, when you read Tveritinov’s excusing answer saying that his picture is not aimed 'against holy icons', but rather intended for "demonstrating it to foreigners and discussing'.

And then all of a sudden a strange sensation appears — one feels that the Cold War era that gave birth to sots-art is as far away from us as the time of Peter the Great when Tveritinov lived. At this point I must remind readers that K&M weren’t satisfied with sabotaging the basics of social realism. After moving to the USA, they remade in a social-realist style the faces of well-known gentlemen from dollar banknotes and other varieties of American Dream (Philadelphia Art Alliance, 2001). In that way, I might suppose, they hinted at the possibility of totalitarian tendencies in American society. And now, in an atmosphere of patriotic excitement that embraces America, such deconstructing gestures also look like evidence of a might-have-been story. This brutal and ironic gesticulation seems somewhat irrelevant from the standpoint of American patriotism. So the merry old fellows had to travel back to 18th century. But the real problem is that the conceptualism that declared the impossibility of direct message and ambivalence of significates and denotates, also probably became a historical style after 9.11.01. 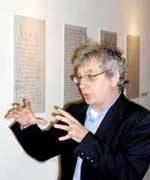 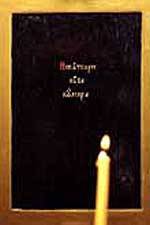