This group exhibition, by the artists Rebecca Lennon, Sarah Duffy and Sophie Jung with curator Carolina Ongaro, is like a brimming basket of foraged goods, a container for ever-changing stories 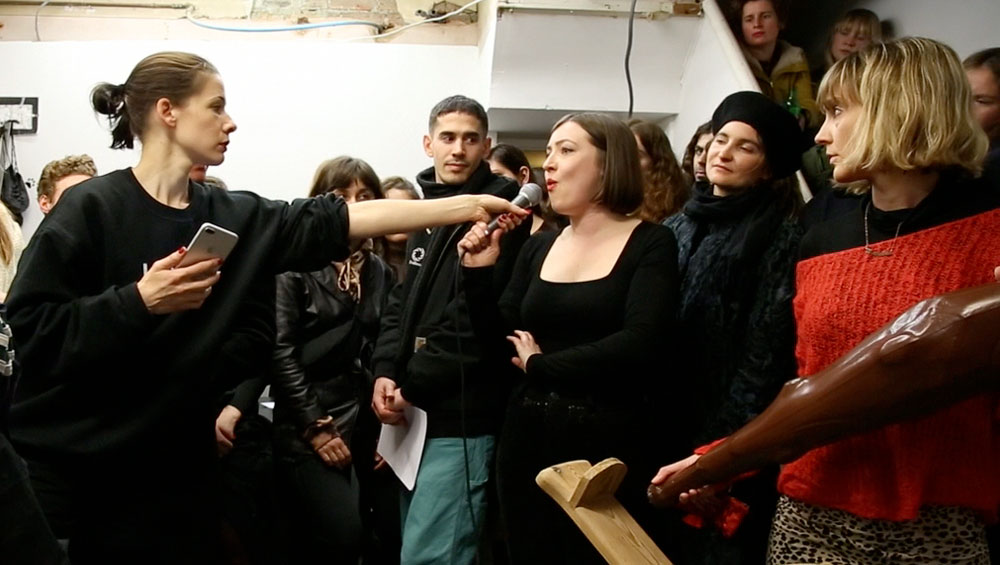 “We’ve all heard all about all the sticks and spears and swords […] but we have not heard about the thing to put things in, the container for the thing contained,” Ursula Le Guin writes in the 1986 essay The Carrier Bag Theory of Fiction. Since brave mammoth hunters etched images of themselves on to cave walls, there has been no shortage of violent, action-filled stories about the heroic ascent of male protagonists. But, to paraphrase Le Guin, what about the gatherers who made bags, who rolled up bark to make parcels or wove nets from human hair to carry food, medicine and other useful or perhaps beautiful things? 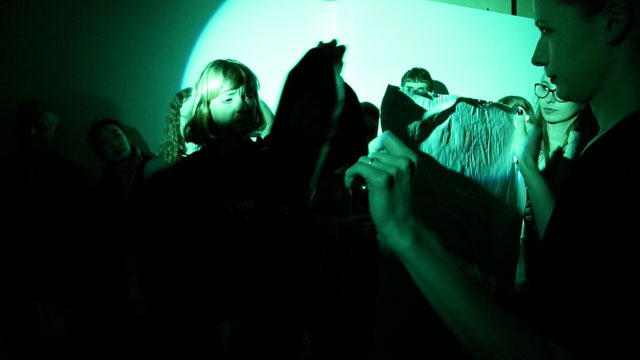 Like a brimming basket of foraged goods, Jupiter Wood’s group show The Ol’ Switcheroo brings together an abundance of tales, myths and fables. In telling stories, Rebecca Lennon, Sarah Duffy and Sophie Jung explore how the tales are formed, how they bear meaning, mutate as they are told and retold and how they affect the teller and their audience. The exhibition and series of performances developed through something like a combination of a treasure hunt, Le Guin’s Carrier Bag Theory of Fiction and the surrealist game exquisite corpse, where players add to a partially obscured drawing. Until installation, the artists could not talk about the form or content of their work between themselves, only to the curator, Carolina Ongaro. But they were allowed to share what they called “nuggets” – clues such as texts, links, images, thoughts, quotes – that they gathered in a group Google Doc file. The artists then picked out nuggets and reinterpreted each other’s ideas, cultivating rich conversation between works while also maintaining each artist’s autonomy and own distinct voice.

Whereas tales of heroism follow a linear narrative arc, starting with conflict and ending with resolution, according to Le Guin, the purpose and structure of carrier-bag fiction, like the exhibition, “is neither resolution or stasis but continuing process”. “The Ol’ Switcheroo” denotes an unforeseen plot twist, often involving an unexpected exchange of objects, as in the story told in the exhibition text. Someone is looking after a baby when it dies suddenly. Panicking, the person puts it in a suitcase and takes off in search of help. Along the way, the case is stolen, whereafter the thief opens the case shocked to find a dead body. 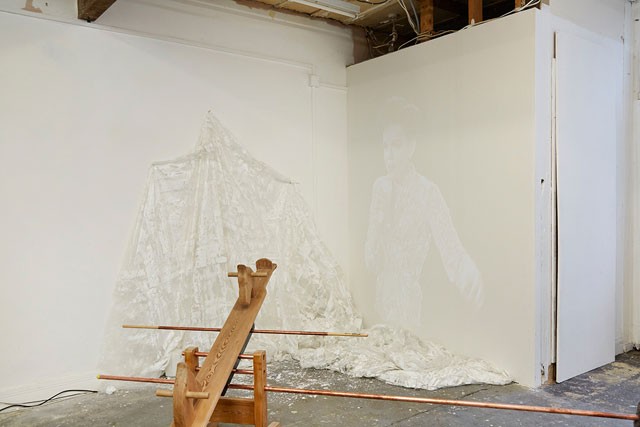 The same tale is reinterpreted by Jung’s Here’s How The Comedy Ends (2018), a work comprising a video projection and an assemblage of objects, which relate to a myriad of stories told in the artist’s performance. Two drumsticks, signed by Pete Best, are slotted into the ends of a copper pipe attached to the underside of a small wooden seesaw in the middle of the main gallery. The so-called Fifth Beatle, Best was the band’s original drummer before Ringo Starr, but got pushed out before the group took off, apparently because his drumming wasn’t up to much, although he said the others were jealous of his good looks. During Jung’s performance, Duffy takes the drumsticks and plays a beat to which Jung raps, retelling Best’s dismissal in the form of an abstracted Ol’ Switcheroo: “Not many people know this but Pete Best was folded up put into a suitcase left at Waterloo station […]. This suitcase now hosts Ringo Starr, the carrier […] He opened his hand, folded it around the suitcase handle, grasped it firmly and carried off the new drummer.” 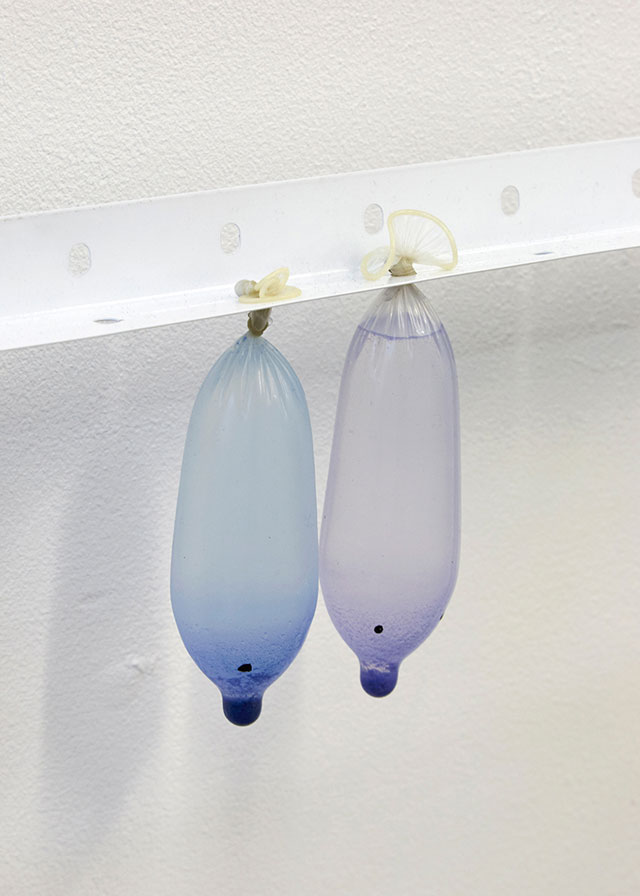 These unexpected reversals and mutations occur at a structural and linguistic level all through the show. Duffy’s Spectral Glide (2018) examines mythology and the voice. A speaker concealed within a large black box plays a narration featuring various fragments of folklore and legend. In Duffy’s performance, the artist rises out of the box through a trap door, as if suddenly awoken or animated, takes a microphone and begins speaking. 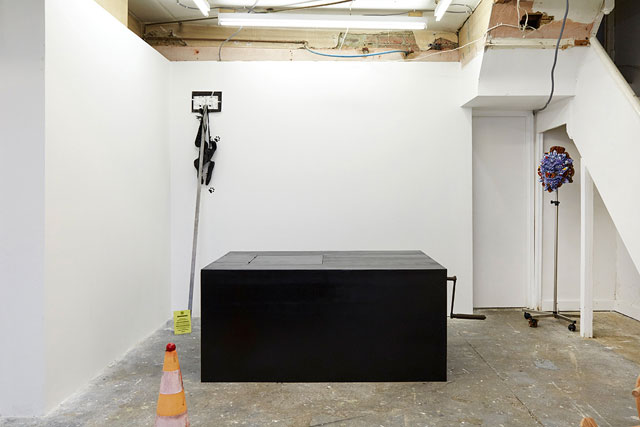 After a while, though, the audience realise that Duffy is not speaking but miming to a prerecorded audio track, like a kind of ventriloquist dummy. The narration itself underlines the slipperiness of language. We are told: “The word siren is a contronym, meaning it contains […] opposite meanings,” denoting creatures that lure sailors to rocks, as well as a warning sound that sends people away from danger rather than drawing them closer. In a similar way, Jung also plays with double meanings, here for humorous effect: “When is a door not a door?” the artists ask the audience. “When it’s a jar,” someone answers. 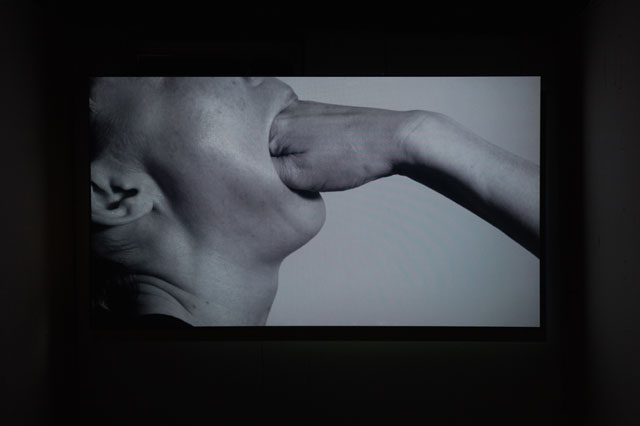 Meanwhile, in a second exhibition space, Lennon’s video work Hellmouth (2018) constructs a bewildering semiotic diagram of containers, exploring its many, divergent forms. The film rapidly cuts between a child playing keepy-uppy with a balloon, a row of wheelie bins, then a pile of sandbags, and so on, until the viewer is overcome by a sense of muddled exhaustion. Lennon also makes a link between containers and the human form: there is a Manneken Pis-like water fountain, a small vase formed of a figure performing a yoga-type upward-facing bridge, and a disturbing shot of someone forcing a fist into their mouth, as if the body were a void like any other vessel, one we fill with words and stories. All the while, a voiceover repeatedly chants: “Your body’s only ever a container anyway”, followed by “separation anxiety”, like Duffy’s performance, effecting an unnerving dissociation between voice and body, story and teller, and a cavernous rupture in narrative convention.