Since the first inception of museums in the late 18th century, we have, until the present day, seen the development of three different generations of museum. First-generation museums, such as the Louvre, were built upon royalties for their own collection. The second-generation museums took a critical stand against their predecessors; the exhibition space seeks to cut off the art works from the surrounding context by proposing an abstract, uniformed space. Examples include Lloyd Wright's Guggenheim Museum in New York and Mies van der Rohe's National Gallery in Berlin. In third-generation museums, the artists seek to create works that interact with their surroundings. Japanese Architect, Tadao Ando's latest addition to his repertoire of museums - the Chichu Art Museum in Naoshima, Japan - is one such example that features site-specific works.

In Japanese, the word 'chichu' means 'underground' and one would, therefore, tend to imagine a dark, dim space where natural light is cut off. Although part of the access way and the front lobby are extremely dark, the main exhibition space brings in natural light creatively through the two main, geometrically shaped, sunken courts. This is, rather, an 'enclosed above-ground museum'.

Why underground, one might ask? The site of the museum is a place where national forest abounds and was a former salt field. To preserve the existing atmosphere and beauty of the site, Ando has wisely 'buried' the museum underground. Only a series of small concrete openings and geometrical skylights float among the greenery.

The entrance ramp leading down to the entrance lobby has two side walls that incline at an angle of six degrees towards the East. This slightly skewed space sets the mood by heightening the tension and suspense of what is to come. There are five galleries altogether, of various sizes and characters, featuring the works of three artists - Claude Monet, Walter de Maria and James Turrell. In the Monet exhibition space, visitors can view five Monet paintings that are illuminated entirely by natural light streaming in from the four edges of the ceiling. Viewed from the lobby, the exhibition space itself looks like a framed painting. The floor is further given an impressionist touch when laid with 20 x 20 x 20 mm white mosaic marble stones.

Walter de Maria constructed his gallery by laying out 2.2 m diameter spheres and 27 wooden sculptures with gold leaf. As the space is aligned East to West, the appearance of the work changes constantly from sunrise to sunset. The works of James Turrell present light as an art itself and are accompanied by spaces that allow for a unique experience. The distinction between architecture and art works is blurred. It is hard to delineate where the architecture ends to become art works and vice versa.

The triangular court connects the exhibition space of the three artists. On two sides of the walls are circulation ramps. Through a slit of 35 cm, one sees a court lined with broken limestone. Inside the museum, the visitor is brought constantly between light and darkness, between mass and void. Incorporating Ando's favorite material palette of concrete, steel, glass and wood, the Chichu Art Museum has an extremely minimal design. By limiting the architecture to an underground structure and refusing to have an exterior design rising out of the ground, the Museum successfully balances the conflict of being architectural, yet non-monumental. In addition, the artistic approaches of Walter De Maria and James Turrell, and the architectural approach of Tadao Ando, are subsumed into one single place. 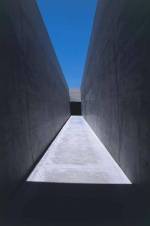 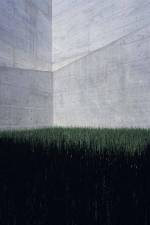