The Blue Man: The Portrait of James Milliken by Jean-Etienne Liotard, c.1762.

The Blue Man: The Portrait of James Milliken by Jean-Etienne Liotard, c.1762

Jean-Etienne Liotard (1702-89) was one of the finest portraitists of the eighteenth century. The recently discovered portrait of the son of Scottish landowner, James Milliken of Milliken was probably painted in the early 1760s when James was on the Grand Tour; there is documentary evidence that James Milliken was travelling with Samuel Kendrick at the time. He was presented to the Duchess of Savoy at Turin some time between July and December 1761. The following year he appears to have been in Florence, where he witnessed the fire in the Uffizi. Tragically he died from a fever in Venice aged 21.

Liotard was, by the 1760s, known in aristocratic circles in England for he had in 1753, made the first of three trips to London. His visit then was to paint the Princess of Wales and her nine children, having at an early stage of his career established himself as a portraitist of exceptional quality with commissions from royal and aristocratic families across Europe. The previously unknown portrait of James Milliken was recognised by Guy Schwinge, from Duke's auctioneers in Dorchester, as an exceptional work. He contacted Dr Stephen Lloyd at the Scottish National Portrait Gallery who immediately recognised the portrait to be a work of Liotard. It was subsequently attributed to the artist, by Liotard scholar, Marcel Roethlisberger, who is based in Switzerland. He has described the work as a masterpiece, a prime example of Liotard's inventive portrait style, in impeccable condition.

The portrait of James Milliken junior, combines the qualities sought after in eighteenth century portraiture of accuracy and truth, "a certain idea of a man, of his function, profession and social standing…life-likeness was the initial purpose of all these portraits, some of them more or less remote from reality, some worked up in ritual poses, some evoking home life".1 In Liotard's portraits, the very formal poses of seventeenth and early eighteenth century portraiture, complete with props such as swords and crowns, give way to a "freer pose, a more familiar, more intimist attitude".2 Roethlisberger describes Liotard as a cosmopolitan artist who painted the nobility of Austria, France, England and Holland, presenting these dignitaries with astounding simplicity, leaving aside all the trappings of office, drapery, crowns and other symbolic objects that characterise the classic portrait. Liotard sought truth to the point that in Venice and Milan, less than beautiful women were reportedly afraid to sit for him.3

The demand for portraits in the eighteenth century, when wealth was accumulating at new levels of society and before the advent of photography, was insatiable. When Horace Walpole described the painting of Thomas Hudson, he could well have been describing Liotard's portrait of James Milliken, and many other of his sitters in the 1750s, "fair tyed wigs, blue velvet coats and white satin waistcoats..bestowed liberally on his customers".4 In Hogarth's Analysis of Beauty, he wrote:

'We know the very minds of the people by their dress'. Dress should help us to 'read' portraits: it informs us not just about status and occupation, about fashionable aspirations and achievements, but also about a yearning for a romanticised past and an exotic present, all of which is revealed in the portraiture of the eighteenth century, perhaps the greatest period in English history.5

Jean-Etienne Liotard was born in Geneva in 1702. He was a twin son of Antoine Liotard, a religious refugee from Montélimar in France. He was directed towards a career in commerce until his exceptional artistic talent was realised. His first work was in the field of Miniatures; he studied painting, enamelling and portraiture in oil and pastel. Liotard went to Paris in 1725 where he became a pupil of J.B Massé and later of F. Lemoyne. His talent created something of a sensation in Paris, where his work became very fashionable; even his early work was much sought after. Probably the greatest influence on Liotard as a young artist was Watteau, whom he greatly admired. Liotard learnt the art of engraving, and as with the other media with emphasis on elaborate technique and skill, he excelled. Perhaps the most significant in the context of Liotard's portraiture in pastel was in fact his engraving of Rosalba Carriera's Portrait of Antoine Watteau (1721). Liotard's art is greatly informed by the delicacy of touch found in Watteau. The Venetian, Rosalba Carriera's triumphant success as a pastellist in Paris in 1720-1 encouraged a number of key artists to take up the medium. The most famous was Maurice-Quentin de La Tour (1704-88) whose lively and opinionated character emerged in his portraits.

Pastel allowed penetrating likeness and vivacity; Liotard took inspiration from his almost exact contemporary by also preferring to concentrate on the face alone, "the face as an expressive palpitating mask', however, where La Tour achieved "an almost theatrical vivacity greater than any in life",6 Liotard's work was more natural and direct. He infuses his works with the moment of recognition; the arresting gaze of his sitters stops the viewer. The energy and presence created enables a dialogue to exist with a past era. Pastel was thus chosen for its freshness and immediacy. The authority on pastel in the history of art, Geneviève Monnier in the only comprehensive study of the history of pastel: Pastels from the 16th to the 20th Century (Skira, 1984) describes pastel as:

Powdered colour with an infinite range of shades and gradations, of unfading freshness and intensity, spanning more than 1650 nuances of the colour spectrum, and peculiarly fitted for ease and rapidity of handling, immediate transcription of an emotion or idea, easy effaced, easily reworked and blended. The pigments can be rubbed in, made luminous and velvety, or given a soft and silky mattness of grain. Pastel is line and colour at once. It can also be built up into rich skeins of blended lines, into rapid jottings of all colours creating a dense and brilliant texture.7

Liotard creates hazy and vaporous qualities using stumping and rubbing. Being so light and dry, pastel is delicate and fragile. The fact that the portrait of James Milliken is in impeccable condition after seven generations in the one family, is remarkable. The portrait has passed from James Milliken into the Spens family through his sister Mary who married Dr Nathaniel Spens (later Nathaniel Spens of Craigsanquhar) in 1759. James and Mary Milliken's mother was the daughter of William McDowell of Garthland, 16th Baron. Nathaniel Spens is best known as the subject of the famous and strikingly original full length portrait, Dr Nathaniel Spens 1728-1815, (1793) by Henry Raeburn (1756-1823), commissioned by the Queen's Bodyguard for Scotland of which he was President (Royal Company of Archers). The Company seems to have accepted its "remarkable originality",8 for they had an engraving produced by subscription. Nathaniel Spens was a younger son of Thomas Spens 16th Baron of Lathallan in Fife9 and Janet Douglas of Glenbervie. Portraits by leading artists of the day were painted and remain in the family; the Liotard is probably the most exceptional.10

It seems that the portrait of James Milliken (christened on 21st August 1742 in Paisley Abbey) was done in Geneva or Italy whilst he was travelling and shortly before his tragic death. Mary Milliken herself died in l774, but it seems that the second son of Nathaniel and Mary, Dr Thomas Spens, of Drummond Place, Edinburgh (also a Brigadier in the Royal Company of Archers, King's Body Guard for Scotland) was the favourite of Mary and so the Liotard passed to him and his line. He died in 1842 and was buried exceptionally in Greyfriars Churchyard, Edinburgh, next to his mother Mary and other Millikens, and not in the Spens graves in Fife. The Millikens had a house in Edinburgh during James Milliken's lifetime. The Spens family were long distinguished in medicine, the law and academic life. Dr Thomas Spens travelled extensively in France during the late 1770s and 1780s, and re-established the ancient family link with the Barons de Spens in Bordeaux and Gascony, and in Sweden to re-establish the connection with the Swedish branch, the Counts Spens. However, Thomas was not only emulating the military and naval traditions of his Spens ancestors, but also of his maternal grandfather, James Milliken. Little detailed history exists of the sitter's father, James Milliken of Milliken himself, but he was entrepreneurially and commercially, related to the West Indies, with sugar estates in St Kitts and Nevis. The economic boom, which took place in Scotland, in particular, Glasgow was in direct relation to the growth of trade in the colonies. James Milliken's portrait by one of the greatest portraitists in Europe reflects the confidence and success that his family's astounding financial wealth created.

The Liotard portrait has passed discreetly and without a break, through the direct line from Dr Thomas Spens to Sir Will Spens, Master of Corpus Christi College, Cambridge, and Vice-Chancellor of the University of Cambridge, (1931-3). He died in 1962. Although the portrait was greatly admired within the family, and referred affectionately to as The Blue Man, the artist, it seems typically, was never much discussed. The work of portrait painters arguably makes up the most vigorous strand in private artistic patronage in Britain from the Reformation to the nineteenth century, revealing a rich seam of social history. The forthcoming sale of the recently attributed portrait by Jean-Etienne Liotard is a rare opportunity for a museum or private lover of eighteenth century portraiture to acquire a work by one of the century's most exceptional artists. 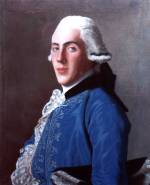