Portraying visual gymnastics, Greg Johns' twisting and twining bronze sculpture at the entrance to the Shanghai Art Fair just about set the mood of the event and gave a glimpse of a slightly different kind of trading taking place beyond the doors. Already in its eighth year running, the annual Shanghai Art Fair continue to impress potential buyers and art lovers with its selection of art. Boasting a total exhibition space of 13,000 square metres and attracting more than 300 exhibition booths both from China and overseas, this Art Olympics of the East remain the largest in Asia. But it was not staged in any forbidding art institutions instead it was held in Shanghai Mart, setting the commercial and trading tone of the event.

Rather than merely focusing on art works which cater to the masses, the Eighth Shanghai Art Fair has again divided its exhibition contents into two different categories, in an effort to raise the level of artistic content of the Fair - the more affordable art and the expensive 'high-brow' works. Both are located on different floors, each with its own distinctive ambience. The more affordable art targeted for mass consumption is located on the third floor and has a bazaar-like setting; the more 'up-market' art is located on the fourth floor, with wider spaces. The art on the lower level aims to whet the general public's interest, educate them and create a basic stratum for the merchandising of art works. Art works on the upper level serve to brand the Shanghai Art Fair, advocating good works so as to promote communication and guide the immature collectors' market.

This year's event is more international than all previous years. There are a total number of 109 overseas participating galleries with Spain, Australia, Korea, France, Germany, America, Japan, Italy, Canada, the Netherlands and Monaco taking up half the exhibition space. Many are top galleries making their debut in Shanghai but are veterans in other international art fairs like Art Basel and Art Cologne. The appearance of these galleries definitely gave the Fair a boost in raising its profile. In addition, coinciding with the French Cultural Year in China, the presence of an army of French art galleries had added a distinctive and flamboyant flavour to the Fair. The foreign galleries focus in general on the contemporary arts, challenging Chinese art collectors and their relatively established aesthetics and preference for realism.

Many different kinds of art works decorate the Art Fair; works by known masters from different periods like Rodin, Miro and Picasso as well as those by young up-and-coming artists. There is a good balance between three-dimensional sculptural works and two-dimensional paintings, a good mix of traditional realist schools and modern abstract ones while the limits and boundaries of techniques and medium are consistently being pushed and challenged. However, the highlight of this year's Art Fair is definitely the abundance of sculptures by different Masters. There is the sculpture 'Monument to Balzac' by Rodin, an 1891 commission to him by the Société des gens de lettres, and the result was a figure which was both an allegory of the creative powers of the novelist and a moral rather than physical portrait of the writer. To add to the repertoire, there is also Botero's bulbous bronze sculpture 'Woman on a Horse' and Arman's 'Music Power' and 'C'. This deliberate emphasis is in tune with the city government's emphasis in creating a cultural atmosphere in Shanghai after the city has gained miles in its economic development. City sculptures thus became an important component in adding the X-factor in cityscape construction.

Other than works using a traditional medium, the Art Fair also saw the presence of works that explore new media and techniques. Jean Dubuffet's 1966 piece 'Borne au Logo' is an exploration of new material - epoxy polyurethane - and is a representative work of that era. This is also the first time for Dubuffet's work to be exhibited in China. On a white base, the grace and harmony of the irregular lines in different colours exemplified the astonishing creativity of the Master.

Another unique piece of sculpture released itself from the ground and 'floated' in the exhibition hall. This is 'Dob's March', a creation by the famous Japanese contemporary artist Takashi Murakami. Made of vinyl chloride, 'Dob's March' is filled with helium gas and greeted visitors with its big curious eyes. Murakami is one of the most influential artists of Japan and his artworks are a mixture of oriental tradition with western influence, and a cross road between noble art and popular culture. 'Dob's March' is the result of the combination of Japanese traditional painting style and contemporary comics and can be viewed as a further continuation of the Pop Art tradition. Of course, one could not miss one of the most well-known work of Pop Art, Andy Warhol's 'Marilyn Monroe' where the artist used the technique of silk-screen printing to blur the delineation between mass-production and art creation.

An art fair aims to be all-encompassing, trying to have something for everyone. Unlike an art biennale, that usually has a more academic agenda and research stance, an art fair is an out-and-out trading game whereby what people are purchasing is not just art, but more of buying a kind of lifestyle. This is an event where corporate 'spot' pieces of artwork to showcase and 'show-off' their business. It is like 'one-stop shopping', like buying in a big supermarket but with a pleasant mixture of vogue and party sensation. With the numbers of overseas galleries swarming into the Shanghai Art Fair every year, boosting the volume of transactions, one could definitely sense the growing appetite of Shanghai on art. 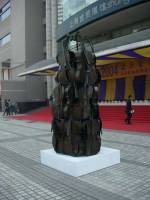 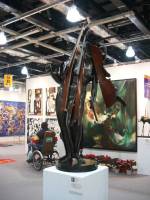 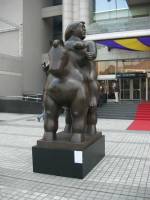