The Architecture of the British Library at St Pancras

The Architecture of the British Library at St Pancras

The British Library famously has had a stormy and protracted development, and it is a tribute to the commitment, determination, and diplomacy of its architect, Sir Colin St John Wilson, that it was finally completed in 1997, and now stands fully operational to its hundreds of daily users. Wilson referred to the saga as his 'Thirty Years War'. There have also been many attempts to 'play down' the significance and permanent value to the nation of this remarkable building and a slow-burning resentment in the architectural world to this achievement. It forms a complete contrast to the non-saga of the Très Grand Bibliotheque beside the Seine in Paris. The architect there had a splendid, riverside site where, as the late, lamented novelist WG Sebald described it (in his novel Austerlitz), 'you have to travel through a desolate no-man's-land … towards the hideous, outsize building, the monumental dimensions of which were evidently inspired by the late President's wish to perpetuate his memory … unwelcoming if not inimical to human beings and runs counter, on principle, one might say, to the requirements of any true reader'. All the promise of a great institution had been dissipated.

Thankfully, there has been no equivalent to the President in London, only the distant braying of a privileged on-looker in extremis.

This author had the pleasure of taking Hans Hollein, over from Vienna, around the British Library building, with the architect nervously in tow. By contrast to Paris, Hollein's reaction here was one of complete admiration, coming from a city that is not tolerant of any but the most meticulous detailing. And yet there is still a hush in London. Now Professor Roger Stonehouse's new book, The British Library at St Pancras stands witness to Wilson's achievement. The sources of inspiration for the Library are, of course, widespread, as one would expect from Wilson, one of the most outstanding teachers of architecture of his generation. Most fundamental as a source for Wilson is Alvar Aalto. But the full disposition of the building draws upon European Modernist sources of the less than recent past: of Dudok; of Louis Kahn; and unavoidably for Cambridge, and Leslie Martin, Wilson's mentor, the English Free Style.

It is curious that although this building constitutes a national British triumph, and is replete almost unwittingly with numerous international references, it exhibits a particularly English ambience, not least on account of the brick-cladding (pace Aalto), as well as more diplomatically in the homage paid in the eastward prospect to Scott's St Pancras Station skyline. Here is a British representation of 20th century Modernism, on the one hand, and of the powerful 'Other Tradition of Modernism' (which Wilson has documented and promoted for the correction of history), just as vehemently set out as was Scott's interpretation there of the English mode of the traditions of high European Gothic, for 19th century travellers to the English Midlands.

Faced with these conflicting sources for context, Roger Stonehouse's book now provides us with chapter and verse of many such roots. There is also, in his chapter entitled, 'Anatomy, function and use', a very clear analysis in the form of a full visual narrative of the stages of development of the design, in the hands of a series of Wilson's colleagues (the lieutenants to boot of this Thirty Year's War). Space is too limited here to analyse in detail the office schemes by MJ Long, or by Peter Carolin, or Douglas Lanham, but they clearly should be documented, as in the book, as an important influence on Wilson's final version. This resulted from a kind of 'final' between Carolin and Wilson himself, in the combination of advantages of both. Then it had been useful to trace some ideas back to Wilson's Spring House, in Cambridge for Christopher Cornford. But here again, MJ Long's ideas proved instrumental.

Stonehouse's analysis has had the full collaboration of the architect although there are some lapses. It is only fair to add that the brick-built extension to the School of Architecture, Cambridge (1959) exhibits a psychological materialism, as minimalist architecture, which philosophically also forms a legitimate precedent as with these further 1960s small schemes in Cambridge. And yet, this iconic building is not mentioned.

There are small details which emerge from Storehouse's book which reveal how Wilson perhaps had to concede defeat on some details: the Kitaj tapestry (which hangs in the Library's entrance hall) specifically in Wilson's early sketches, did not have any border. That curiously unwarranted embellishment now diminishes it in the final, officially approved version (and at what cost, in terms of pointless tapestry extension?)

The book is comprehensive in providing a compendium of all the facts and concepts. Stonehouse reveals Wilson's definition of how by identifying a place (or places) within the building, the individual 'also sheds light on their own identity'. Wilson's antithesis was expressed in his article on Albert Speer's, Chancellery for Hitler in Berlin, 'where, intentionally, awareness of personal identity is drained by the numbing repetition of elements that make it impossible to identify or attributes significance to any one element ... neither proportion nor detail imply any human presence'. It was valuable to elucidate exactly what the Library was not about, as much as it was about in terms of certain timeless architectural values.

In production and design, this expensive book has no colour pictures. But the quality of Gerhard Stromberg's superb black and white photography renders colour largely non-essential. Notwithstanding this rationale, the richness of the library on an average (sunny) day begs for documentation of the fuller effects of light. From the calmness of the finishes to the formally articulate range of the building internally and externally, all would swell with the experience of colour and tone. The book has a reminiscence to architectural documents of the 1930s (for example, Alberto Sartoris) which is itself an appropriate mode for the Library. The book thus conveys an archival quality of the recent past for the reader, wholly appropriate for the Thirty Years struggle that was vindicated.

Sir Richard MacCormac has provided an Introduction which succinctly places the entire venture in a design context. Dr Brian Lang provides a longer essay which reviews the longer technological implications of the Library. As the Chief Executive who edged the Library along a subtle path to full realisation, his essay is from the heart and yet adds an appropriate touch of realism to the event. He could be seen at the recent book launch, standing back and yet heaving, metaphorically, an immense sigh of relief. 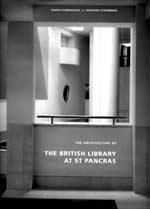