A Harvey Nichols paper bag, a single branch from a plum tree and a pile of shaved fur coats are some of the objects Fujiwara uses to challenge our common perceptions and stereotypes, as he turns the gallery into a factory assembly line, even producing new pieces during the show

White Day at Tokyo Opera City Art Gallery is the first solo show in Japan for British-Japanese contemporary artist Simon Fujiwara and includes both recent and earlier works. Fujiwara, who now lives and works in Berlin, was born in London in 1982 to a British mother and a Japanese father and brought up near St Ives in Cornwall. Known for works rooted in autobiographical events interwoven with fiction, Fujiwara challenges our perception of common beliefs and stereotypes surrounding the concepts of “object” and “product”.

The exhibition’s title refers to a relatively recent Japanese custom – invented by a Japanese chocolate manufacturer in the 1970s – in which, one month after Valentine’s Day on “White Day”, men return a gift to women. This idea of returning a gift is typical of Japanese mentality. Through the exhibition title, Fujiwara is pointing out that, though common in Japan, the custom is not known about in other countries, and he questions, through his own encounters with odd experiences, how what some of us consider to be common is not necessarily so in other parts of the world.

The exhibition is presented in the form of a factory assembly line, with objects that have been given or received, produced by industrial methods or made by hand, with a few of the pieces being made by Fujiwara himself during the exhibition. The show starts with a Harvey Nichols paper bag laid on a pristine white carpet. In 1996, Harvey Nichols became one of the first luxury British stores to expand into the north of England, a market that had been associated with working-class society and was not seen as a likely target for the brand. Fujiwara was interested in Harvey Nichols’ optimistic strategy and its belief that working-class people would buy into its luxury brand.

While European audiences may understand the connotation behind the association of a luxury brand such as Harvey Nichols with the working class, the Japanese may find it hard to understand. On the other hand, the Japanese are likely to have an affinity with the plum tree, a branch of which is also lying on the white carpet, that people from other countries may not share. Traditionally, the plum tree, which blossoms around February, is a symbol of renewal and revival after the winter and is widely revered in Japan, but for those outside the country, it is dwarfed by the blossoms of Japan’s cherry trees, which are praised universally. In the exhibition, a single branch from a plum tree lies with its leaves torn apart, surrounded by coins. Here, Fujiwara is referring to the Japanese custom of throwing money at a shrine when praying to a deity, an experience he first encountered a few years ago. Fujiwara was surprised that the Japanese gave money, which is something very secular, as an offering to a sacred deity. “I was struck by the fact that the Japanese throw money as an offering to the serene deity. I then came to understand that Japanese (or Asian) culture places metaphysical value on money. Money thrown at shrines doesn’t bear political value as a ‘currency’, but has a different meaning,” says Fujiwara.

This insight made Fujiwara think about the role of currency in another civilisation. In the exhibition is a coin, dated 1914, from a hacienda in Mexico. Haciendas were collective communities, normally plantation, mines or factories in Mexico, operated using slave labour until the early 1800s when slavery was abolished. After that, farm and factory owners had to find a new way to make a profit, but this time under the system of democracy. Hence, to pay for the labour, some haciendas began to produce their own currency, such as the coin on show here. These currencies could be used only for the shops in their haciendas. Similarly, during the second world war, in 1942-45, when Japan occupied the Philippines, it issued its own currency to be used there. However, when the Japanese army left the Philippines after losing the war, the money became worthless – simply sheets of paper. The local Filipinos, regardless of any emotional feeling they may have had about the currency coming from an occupying army, had no hesitation in using the paper money as a material to produce different artefacts, such as fans – another sign of optimism.

The exhibition continues with Fujiwara’s insight into industrial fur production. A pile of fur coats, their leather base stripped of fur, are part of series of work called Fabulous Beasts. The skins have been completely shaved, revealing the stitching below, then sewn back together and stretched to look like canvases. The patched bare leather reminds us more of artwork than the rearing of animals, as well as showing the ingenuity needed to sew small pieces of fur together, evidence that the fur coat is an outcome of industrial production and craftsmanship. “For me, these pieces are expressive, almost like expressionist painting,” says Fujiwara. “But they are loaded with meaning only because of the absence of the main material, which is fur.” There may be those who are ethically against the fur industry, but scrutinising pieces of leather entirely stripped of fur allows the viewer to appreciate the craftsmanship involved in a way that would not be possible if the fur was still intact.

During the exhibition, a production line of Fabulous Beasts will be running, with trained staff sewing pieces of leather. Fujiwara says: “For me, born in 1982, growing up in a largely digital reality environment, seeing objects made with such attention and expression is a luxurious experience. Also, coming from a generation that loves to know about every detail of the production, looking at these works is enjoyable. I feel that real luxury for us today is not about possessing expensive products such as a fur coat, but is about learning how these things are made.”

This “post-internet age” mind is reflected in the layout of the exhibition as well. The gallery space has been structured like internet space. Not something new, but related to historical forms, artefacts are laid out from the bottom to the top of the space and from left to right. On the carpeted floor are fragments of photos of the lips and eyes of the model Ariana Miyamoto, who was born to a Japanese mother and an African-American father and, in 2015, became the first multiracial Miss Universe Japan. This caused some controversy, with arguments as to whether Miyamoto was “Japanese enough” in the Japanese media, and the news even reached CNN News in the US and the UK’s Independent newspaper. Fujiwara, himself the child of a mixed marriage, was surprised at this worldwide reaction. In an age when interracial marriage is so common, many of us question why there was this controversy. Probably the whole Miss Universe system should be rethought.

Tellingly, the photo of the lips and eyes show just a fragment rather than the whole of Miyamoto, in the same way that the audience cannot understand the full story surrounding the controversy. Just as different people interpret information on the internet differently, pieces on show will elicit various interpretations, depending on each viewer’s personal background. 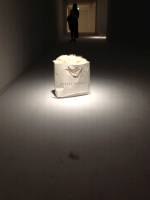 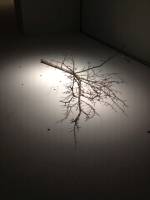 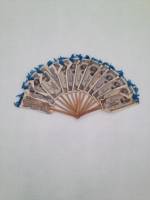 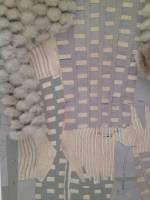 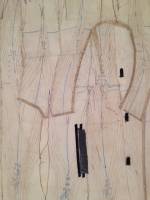 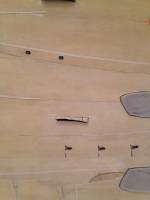 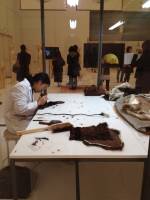 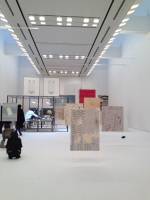 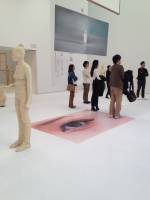