Shiver Me Timbers!, a new exhibition of work by Berlin-based British artist Nick Jeffrey, is the Hannah Barry Gallery’s second show in its new two-storey space in a warehouse in Peckham, south London. Jeffrey “brings together large-scale painting and sculpture, [through] rag-and-bone abstraction and improvisatory, reactive techniques [which] he describes as like ‘picking up a guitar, hearing the reverb and static and then following its lead, handling it’.”1

As he prepares for the opening of the exhibition, Jeffrey walks me round a large, bright yellow, mixed-media sculpture titled A New Modernist Romanticism. It looks like some sort of tree, cobbled together from just about anything to hand, then tied with string and lit with variously coloured bulbs. This work was part of his 2011 degree show in the Royal College of Art’s painting department; then it was titled Is that what you did? You’ve got to be kidding me. The day before I see it, the piece underwent an even more radical change when Jeffrey spray-painted it neon yellow. “Why yellow?” I ask. Jeffrey takes off his yellow hat – more mustard than oilseed rape – and for a moment we think about the difference between various tones of yellow.

Quirky doesn’t describe Jeffrey’s work accurately; neither does weird, actually. Endeavouring to fix his practice into a genre also misses what I suspect is the point of being in, and responding to there, and the shaping of materials. Looking at a large wall work titled Bringin three spare tyres, a richly ink-marked/stained/splattered, raw linen canvas, far from pretty yet steeped (literally) in tonal lusciousness (I’d wear it if it was a dress), I wondered whether landscape is a relevant reference to some of the works. “I don’t like the idea of the word landscape, it traps it down,” Jeffery tells me. “I’m interested in the idea of space, room to move, thinking space, and built-up surfaces. I take materials and turn them inside out. It looks accidental – a lot of the time it’s when your making the work, the stuff that drops down is better than the marks you’ve made.”

The wall piece Untitled (Roy Orbison), is another example of Jeffrey’s enjoyment of mixing and manipulating materials. The pink painted stretcher forms frames as it shows through the largely transparent polyester (bought by Jeffrey from a Turkish market in Berlin). A small photograph of Roy Orbison – the top of his head and his dark glasses – is collaged behind the polyester, prompting us to sing quietly, “Only the lonely – dum dum dum dum didlyah daa …” These large and engaging works are tantalisingly haptic – the temptation to press the polyester surface of Untitled (Roy Orbison), or run your fingers over the vigorous scrapings that cross a palimpsest of materials on some of the other wall pieces, echoes Jeffrey’s own response to the world through making. “The power of these works is in their accidental transcendence, the tension between the virtuosity of the artist and the lo-fi, reclaimed materials employed.”2

With a lightness of touch being absorbed in the materials during the process of making, acutely aware of physical and disciplinary context (there is drawing in them there spaces, too), yet with a playful disregard for rules of engagement, Jeffrey’s work appears deceptively easy and contains a deal of visual delight and energetic muster. It is fitting that this exhibition’s title, Shiver Me Timbers!, though generally understood as comical, also alludes to the very real, life-threatening fear that sailors experienced when their ship was lifted out of the water and pounded back down so hard on the sea as to shiver the timbers. Jeffrey’s works do indeed amuse and entertain, yet they also jiggle disciplinary boundaries and ripple subversive waves over the comfortable condition of things. 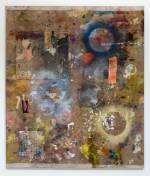 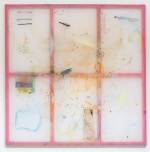 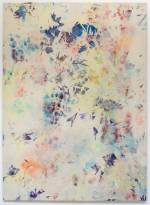 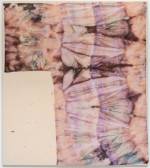 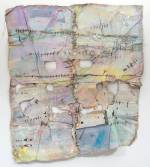