As the artist returns for her third solo show at The Approach in London, she continues to create three-dimensional photographs, exploring the relationship between image and sculpture

For several years now, Sara VanDerBeek (b1976 in Baltimore, Maryland) has been considered to be at the forefront of an exciting wave of American artists working at the boundaries of what photography can achieve. Alongside contemporary photographers such as Liz Deschenes and Eileen Quinlan, VanDerBeek is one of the few artists pushing forward the innovative ideals of the so-called “Pictures Generation” – a phrase attributed to a small group of New York-based artists who rose to prominence in the 1980s. Her place as one of the key figures on New York’s contemporary art scene has been cemented through her inclusion in the permanent collections of the Whitney Museum of American Art and the Brooklyn Museum.

VanDerBeek’s current exhibition at The Approach displays work from her series Electric Prisms, Ventura and Concrete Forms, and is inspired by her recent experiences in North and South America. The materialisation of these experiences – in the form of the works – are not necessarily evident on viewing. But as you discover that VanDerBeek has taken inspiration from pre-Columbian textiles from Peru and various motifs that can be found in North American quilts, you can begin to see and comprehend the connections being made. Repetition and reduction are both equally integral to VanDerBeek’s process. It therefore comes as no surprise that the artist looks to textiles as a way of informing her own photographic practice.

The focal point for the exhibition is arguably Electric Prisms I-XII (2015), which features 12 variations of the same composition. Individually modest in scale, the 12-part series lines an entire side of the gallery space horizontally at eye level. The composition itself consists of three prisms aligned seamlessly together at a diagonal angle in the centre of the overall image. This seamless intertwining of the prisms results from the transparency of some of the sides. But because the colours vary from image to image, the transparency of the composition varies too, despite it remaining the same throughout. The colours selected for Electric Prisms I-XII form part of a spectrum that could be seen as representative of the various tones present throughout the day. Beginning with a midnight blue, the series “wakes up” in the middle with an outbreak of pink (sunrise/daybreak) before descending back into a cool haze of different blues again (dusk). The colours themselves, however, have actually derived from less obvious sources and include pre-Columbian artefacts captured in Quito, Ecuador, a page from a book on Max Ernst’s work from the 1970s, a close-up of a faded pink concrete wall taken in Ventura, California, an album cover of The Smiths (I’m going to have a guess and say that it is Louder Than Bombs), and a detail of a patterned wall in Rio de Janeiro, Brazil. VanDerBeek therefore manages to successfully marry an abstract narrative – a visual journey through the day – with her own personal journey throughout the world.

On the opposite side of the wall is VI (from the series Ventura, 2015), which could be considered as VanDerBeek’s unique take on a diptych. Like Electric Prisms I-XII, the composition remains the same in both images, but there is a very subtle distinction between the two in terms of colours. The composition features two right-angled triangles with one layered above the other with one of them connected to a square, and another separate square placed behind that. VI demonstrates VanDerBeek’s fantastic eye for colour differentiation. At first glance, you could be forgiven for thinking that VI is the exact same image doubled up – especially when you know that the artist’s practice is driven by repetition. But it is in the realisation that you are actually witnessing two separate images that the piece comes alive. The piece also springs to life – like all the others in the exhibition – because of the framing technique. In all of the works – but most notably in VI – VanDerBeek has employed techniques that have traditionally been used for two-dimensional imagery, and reassessed them in order to create three-dimensional photographic structures. This is achieved through careful layering of her photographic images within the frame. The result places the works in an artistic grey area falling somewhere between photography and sculpture. The compositions themselves have an illusory quality and when placed on top of the three-dimensional structure created within the frame itself, the overall illusion deepens even more.

The final piece in the exhibition is called Concrete Forms (2015). It features the most complex composition, comprising of three tilted cubes and a large vertical rectangle. With an entire wall dedicated to this single modest work, the gallery wall almost becomes part of the piece. The wall could be seen as yet another physical layer to the work increasing this sense of the three-dimensional and in a way that begins to engulf the viewer. The exhibition as a whole is intensely calm. The intensity comes from the amount of space there is within that one room – because of the modest size of all the works – and the calmness can be attributed to the soft pastel colours within the works themselves. This ultimately creates a very fulfilling experience in which your mind is given the freedom and space to meander in and out of these prism constructs. 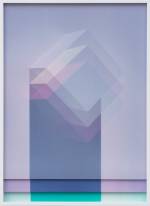 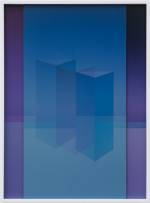 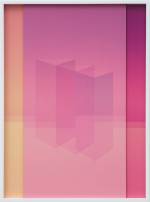 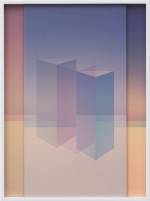 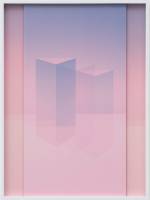