Russian artist Sanya Kantarovsky has based this exhibition on Mikhail Bulgakov’s satirical novel The Master and Margarita. Exploring the story on canvas with oil, pastel, watercolour and oil stick, he translates the author’s words into art

Sanya Kantarovsky, who was born in Moscow in 1982, is showing five large-scale paintings at Studio Voltaire in an exhibition titled Apricot Juice. The works are bold and colourful, and tell the story, in five parts, of The Master and Margarita, a book written by Russian author Mikhail Bulgakov in the early part of the 20th century. Published in 1967, 27 years after his death, the book is a fantastical critique of the increasingly secular Soviet society during Bulgakov’s lifetime, a critique so extreme that the author destroyed it once and then had to rewrite it from memory. Kantarovsky explores the story on canvas with oil, pastel, watercolour and oil stick.

The story is important because Kantarovsky is loyal to Bulgakov’s masterpiece, titling his works after the chapters and including an accompanying quote with each painting, which describes the scene. In the book, Woland, who is the Devil in the guise of a foreign professor, visits Moscow with his band of strange followers, including a vampire called Hella and a giant cat called Behemoth, who plan to uproot the Russian literary elite. In alternating chapters, Bulgakov tells another story based in Jerusalem, where Pontius Pilot places prisoners under trial, eventually imprisoning Jesus. It is a surreal take on a parable about good and evil set in a godless society.

Kantarovsky works with Bulgakov’s descriptions of the characters and they come to life. In Never Talk to Strangers (2015), the first chapter of the book, I spot the literary editor Berlioz, “short, dark-haired, well-fed and bald” and the homeless poet Bezdomny, with his “curly reddish hair”, sitting beside him on a bench. The two characters meet at a Moscow park called Patriarch’s Ponds for some warm apricot juice, the only thing on sale at the kiosk. “The apricot juice produced a rich yellow froth,” writes Bulgakov, “making the air smell like a hairdresser’s. After drinking it, the two writers immediately began to hiccup.” Kantarovsky paints the background setting with soft overlapping shapes of pinks, oranges and greens, and the sickly sweet apricot syrup somehow manages to seep through into the scene.

During Soviet Russia, illustration was an important art form. The constructivist movement ruled that art had to be purely practical with a social purpose. Kantarovsky shapes his characters with an influence from Russian art history. The oval faces and round glasses of the characters resemble line drawings I have seen between the pages of Vladimir Nabokov’s Pnin and Fyodor Dostoevsky’s Crime and Punishment. He harnesses the thoughtful detail of an illustration through small, unexpected objects; a blue flower, a red ear, a handgun, yet he layers these details  with  the simple block shapes of a suprematist painting. The characters, with their sloping shoulders and bowling-pin limbs, are built up using a colourful patchwork of shapes capturing the surrealist tone of The Master and Margarita. Because Kantarovsky’s works are not tucked between the thin pages of a novel, nor pasted to a poster board outside a theatre, these images are not a supporting gesture, but the focus of a whole exhibition. Instead of illustrating, he translates Bulgakov’s words into a new form, art.

Kantarovsky layers up flat shapes in the same way that Bulgakov weaves storylines, creating a composition that the eye travels through as the action unravels. He uses pictorial devices such as a cracked monocle or the profile of a dog, outlined with a thin line, to frame different figures and scenes. In The Flight (2015), titled after the 21st chapter of the book, each character has a frame. The Margarita occupies a central rectangle, and three curious faces sit inside floating squares, peering out like the animated witches and wizards hung on the walls at Hogwarts.

Kantarovsky grew up in Moscow, where he had painting lessons from an iconographer and spent time looking at his grandparents’ art books, and the figurative tradition of religious artwork made its impression on his artistic consciousness. The artist frames Bulgakov’s characters with the same compact quality that is seen in the Orthodox saints peering out of lockets or encased in the thin black sealing of stained glass windows. In Bulgakov’s story, the strange cast of characters replaces the religious elite at the altar of Woland. In the dimmed setting of Studio Voltaire, a Victorian former chapel, the monumentally sized (180 x 280cm), jewel-toned paintings are lit by focused spotlights, resembling the stained glass windows of a surrealist cult, telling the parables of The Master and Margarita. Kantarovsky echoes the religious context of Jerusalem in which Bulgakov sets his fantasy.

Disrupting anything holy, the wild Margarita flies through the painting on a broomstick like a witch, her dark hair billowing out behind her like smoke. There is a circular blue pig on her heels and a yellow sun fills a space above her. The quote reads: “Margarita floated out of the window, where she turned and hit the glass a gentle blow with her hammer. It shattered and cascaded in smithereens down the marble facade on to the street below. Margarita flew on to the next window.”

For the exhibition, Kantarovsky collaborated with Lithuanian-born performance artist Ieva Misevičiūtė. On the opening night, on a stage shaped like the giant cat Behemoth, she performed an obscure dance and a passionate speech about the colour red. In her red dress and with painted red ears, with her strong jawline and deeply accented voice, Misevičiūtė became one of Bulgakov’s cast, passionately protesting about, and then participating in, the demise of art, religion and culture.

Kantarovsky engages in a cultural conversation through Bulgakov’s dense characters with their strange attributes. He pitches his work at the same point between satire and surrealism, fantasy and reality, as Bulgakov does in his novel, and uses painterly techniques of layering and framing that echo Bulgakov’s playful literary techniques. With references to the past and the present, Kantarovsky pitches himself within a genre of modern and contemporary painters showing the whimsy of Marc Chagall, the graphic humour Philip Guston and the carnivalesque of Ryan Mosley. 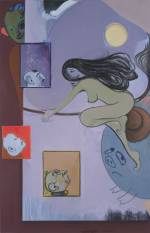 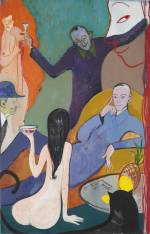 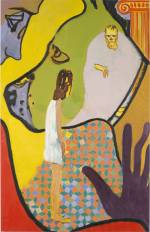 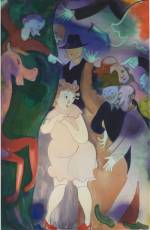 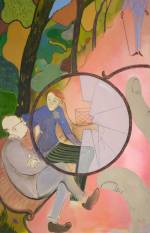