The Pakistani-born artist says much of her works have been in response to stages in her personal life, from documenting the death of her mother, to painting children in beautified battlefields, to looking at how her clothes could tell a story

Janet McKenzie: Saba, it was great to discover your work in Dubai, particularly after seeing the exhibition Trajectories, which revealed so much about the history of art from the subcontinent (through printmaking) and the contemporary situation in Pakistan and India. You were born in Pakistan, grew up in the United Arab Emirates and then trained at the National College of Arts in Lahore and in the US. You now live and work in Dubai. How does your education at the NCA inform your work today?

Saba Qizilbash: My four years at NCA were a life-changing experience. It was not only the education and training inside the studios that shaped and informed our works, it was the space itself – its walls, history, graffiti, abandoned art, unfinished sculptures, recycled canvases. Especially during the years I was there, it was an unusual oasis in the old inner city of Lahore. Its mere description and location begins to sound like an opening passage from a Merchant Ivory production. Yet, in all honesty, I learned more outside its studios than within the structure of the courses being taught. Unfortunately, we were only taught western art history, unless I missed something on a day when I was off sick. There was also a strong tradition of learning from the graduating seniors. Close to the final senior shows, juniors would latch on to those they admired and assist them like apprentices.

My work includes my studio practice and the teaching I do. I constantly refer to my learning experiences from NCA to bring something new to my teaching in Dubai. There is so much relevance, considering most of my students are from the Middle East, Iran and India. There are layers and layers of shared history of pre-colonial trade and warfare.

JMcK: Your rigorous training in representational drawing, especially from the figure, enables you to create a rich and evocative narrative. You focus on essentially female experience. What does your work convey about the role of women in Asia and the Middle East today?

SQ: The role and experiences of women in Asia and the Middle East cannot be bunched together as a collective whole. Even as a Pakistani woman, I cannot speak for the experiences of women who are currently living there. This is such a complex issue. There are many Pakistani women who are highly educated, successful and emancipated, but with respect to the general population, they still form a very small sliver of society. I come from a household of strong matriarchal figures. My issues were never those pertaining to male dominance, equal opportunities and male chaperons. I was encouraged to travel, study abroad, express my views. This was a description of my childhood and youth. Being a married South Asian woman is a whole other ball game. Much of my works have been a response to the various stages my personal life has taken in my adulthood. From Family Ties, in which I documented my mother’s painful passing, to the Not For the Faint of Heart series, where I positioned images of children in beautified battlefields, to my wardrobe series [The Empress’s New Clothes], where my yesterday’s clothing left on a coat hanger began to tell a story. I have always made an attempt to speak from personal eye level.

JMcK: You make references to traditional art of the subcontinent in your painting, such as the miniature figure painting; and you also use coffee washes. Are you interrogating tradition, or is your work essentially personal and pragmatic?

SQ: In my talk at Crossing the Line 2: Drawing in the Middle East I shared images from a few different series. I have worked with coffee washes in the past,but it is not part of my current investigation. I enjoy miniature paintings, but have not been trained in this technique. Nor do I reference this style in my works. The closest I would say I get to miniature painting is the meticulousness of my painting technique.

JMcK: In many of your paintings, your imagery is dark and leaves the viewer with a feeling of extreme discomfort. What do the images Not For the Faint of Heart refer to?

SQ: This piece is from a few years back when I was grappling with heightened level of insecurity in my hometown of Lahore. There was newness to the blasts, and public spaces were just beginning to appear unsafe. I imagined the unseen fears in the form of poisonous, often phallic-like growths. The children in my narrative would confront them. These children of the conflict knew exactly how to deal with them.

JMcK: In the recent artist’s talk you gave at the American University in Dubai, you referred to life in Pakistan today as being very dangerous. What do your images of children’s clothing, where the figures are absent, refer to?

SQ: Loss. The absence of the wearer alludes to untimely loss. We have a strong tradition in Pakistan of distributing the wardrobe of the deceased as soon as possible. A well-meaning member of the community will soon enough give you a gentle reminder if you have overlooked it. Sometimes you hold on to the clothing and immortalise them. Worn clothes contain past smells, DNA, memories. They talk of where we went when we wore them. Sometimes infused with phenyl, they inform us that these were once considered precious enough to save. In some of my earlier works, strewn children’s clothing is a direct reference to the aftermath of a disaster, a reference to moments of rapture that transport the bodies and leave behind the clothing to tell a different story.

JMcK: Your paintings of babies and small children in surreal and dangerous situations can be viewed as maternal anxiety. Is it also, by extension, a political comment? The recent shocking events of the school massacre in Peshawar, Pakistan [where more than 150 people were killed in an attack by the Taliban], have taken place and been aired to the world. What can you as an artist aspire to in your lifetime when you are also a mother?

SQ: The kind of images that came out of Peshawar following the massacre by the Taliban were paralysing. I don’t think I ever pushed my works to that level of explicitness – conceptually or within the imagery. Nothing I could draw or paint could do justice to the magnitude of what happened in that school. My earlier anxieties as a mother to my two children seems to have dissipated. For the time being, I find myself submitting to the unpredictability of our geographies.

JMcK: Can you explain how you came to employ clothing and costumes to allude to the multiple roles you are required to play as: a social being, a mother, a professor?

SQ: At some level, people all over the world dress to play a part – the cleric in white, the pinstriped businessman, the tricolour clown. What fascinated me was how our clothes, even once removed, continue to play the part. I began to play around with clothing installations after watching my yesterday’s outfits swell on the coat hanger. I’ve realised that more than the politics of what I wear, my concerns lie in the constructions that I am able to make with them. And how these disembodied constructions speak of a state of the body, even in its absence. At times, I create these installations and leave them poised in some part of my house. These installations begin to create a humanlike presence – still, yet breathing.

JMcK: You present a rich narrative that refers to female experience historically and in the present. What do you hope to achieve in the course of your artistic career?

SQ: When you choose to be an artist, you highlight in fluorescent that you have a unique way of looking at the past, and the present continuous. It becomes a responsibility to create and present works that are aligned with your evolving philosophy. It is an ongoing journey with very intangible goals. Bearing that in mind, I would like to draw an audience that feels it can engage with my works in its own personal unsubscribed ways. That sort of engagement is loosely what I hope to achieve. The rest, I hope, remains ever evolving and ever surprising. 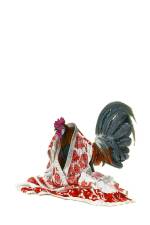 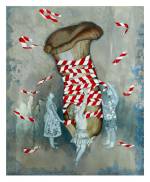 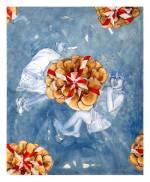 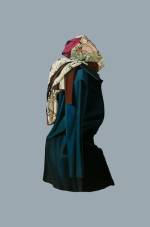 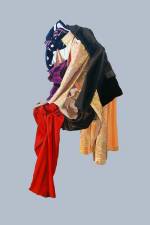