Russia and the Arts: The Age of Tolstoy and Tchaikovsky

Russia and the Arts: The Age of Tolstoy and Tchaikovsky

This exhibition introduces visitors to the talents and turmoil of the Russian arts scene from 1867 to 1914 with some exquisite loans from the State Tretyakov Gallery in Moscow. Emily Spicer spoke to Dr Rosalind Blakesley, curator of Russia and the Arts, about some of the stars of this exhibition and how the show came together 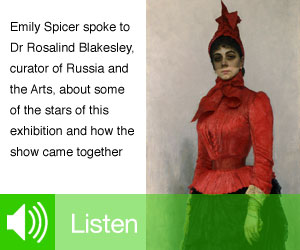 While most visitors to the National Portrait Gallery will be familiar with Tolstoy, Chekhov, Tchaikovsky and Dostoevsky, few will know the names of the artists who painted their portraits. And that is a real shame, for they should be as familiar to us as Sargent, Manet and Whistler. Happily, then, this concise, but rich exhibition brings us face-to-face with a remarkable group of people, from critics and actors to playwrights and poets, captured by some equally exciting painters.

Ilia Repin (1844-1930) was one of the first Russian painters to make a name for himself outside his native country. In Russia, he is considered one of the greatest artists of his generation, and while his vivid brand of social realism may be out of fashion, no one could deny his prodigious talent.

One of his most famous works, Barge Haulers on the Volga (1870-73), carefully describes a ragged band of men with bearded faces coloured brown with dirt. They lean wearily into leather slings attached to the gilded boat they pull behind them. Every face exudes collective hardship while emphasising an individual personality.

Teasing out the person behind the suffering was one of Repin’s greatest strengths. For curator Rosalind Blakesley, his portrait of the composer Modest Mussorgsky (1881) is one of the greatest of all time. It is a brilliantly executed study of tragic genius, and perhaps the most moving painting of this exhibition, although there are some strong contenders.

Mussorgsky’s is the face of a 42-year-old who looks like a man in his 50s. The bags under his eyes, the red nose, puffy face, potbelly and dishevelled hair speak of a man who has reached rock bottom. But showing at his chest, under the hastily painted dressing gown, is the hint of a beautifully embroidered shirt. This is a man who had not quite given up. Sadly, though, a nurse smuggled a bottle of vodka to him on his name day and he fell off the wagon, dying just days later and before Repin had managed to visit him for one final sitting. Repin donated the fee for his portrait to the composer’s memorial fund, so moved was he by the circumstances.

This exhibition is full of tragic tales. Vasily Perov’s portrait of Fyodor Dostoevsky (1872) is the only one that was ever painted from life. His haunted face stares into the void while his sharp cheekbones and watery, pink-rimmed eyes speak of his suffering. At 28 years old, the writer was sentenced to death, but just as the last rites were read and the rifles raised, a reprieve came through. His sentence was commuted to several years of penal servitude in Siberia, an experience that would shape him, and his work, for the rest of his life. Perov takes a sympathetic view of this man’s suffering. There are no trappings of his craft or home, just the solemn face and taught posture of man whose past has been internalised. His doleful eyes tell us all we need to know.

The elegant dignity of Anna Akhmatova (1914), who continued to write despite gruelling persecution under the Bolshevik and Stalinist regimes, shines out in the last room of this exhibition. Olga Della-Vos-Kardovskaia captures her distinctive profile, hooded eyes and stately posture, which make her look like a literary Duke of Wellington, stalwart and noble with her red shawl. Her partner and son were imprisoned for lengthy periods because of their connection with her, and she was kept under close surveillance. A portrait of her first husband – they divorced but remained close – hangs alongside her. He was executed for his alleged anti-revolutionary activities. It was under these conditions, and despite being prohibited from publishing her work, that she still managed to become one of the most revered poets in Russia. 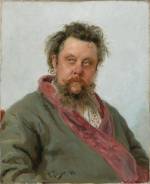 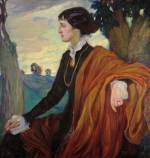