Hannah Quinlan and Rosie Hastings: ‘Our work poses questions that bridge the gap between the past, present and future of queer culture in the UK’

Hannah Quinlan and Rosie Hastings: ‘Our work poses questions that bridge the gap between the past, present and future of queer culture in the UK’

The collaborative duo talk about their film UK Gay Bar Directory, which is showing at the Walker Art Gallery in Liverpool as part of its exhibition Coming Out: Sexuality, Gender and Identity 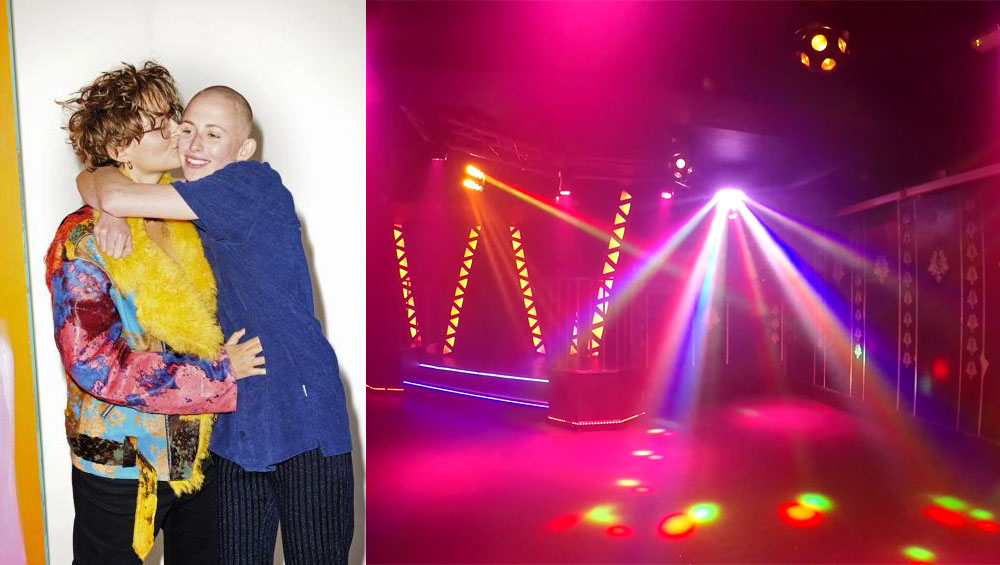 Artistic duo Hannah Quinlan and Rosie Hastings assembled footage of more than 100 gay bars across the UK for their 2016 video UK Gay Bar Directory. The five-and-a-half-hour film methodically documents these spaces – including gay bars that have now closed, such as the Hoist in London. The importance of their directory lies in its ability to function as a public resource, which is part of the artists’ intention for the work: to consider the future of how we archive and rematerialise LGBTQ+ histories. The film has now been acquired by the Walker Art Gallery in Liverpool, where it will serve as a tool to revisit the effects of the current government’s austerity cuts, as well as to examine queer histories, asking poignant questions of who is and isn’t given institutional space societally.

I met Quinlan and Hastings in Liverpool, where the UK Gay Bar Directory is exhibited in the Walker Art Gallery’s current exhibition Coming Out: Sexuality, Gender and Identity. Surveying work from 1967 to the present, and including, in addition to Quinlan and Hastings, artists such as Sarah Lucas, Steve McQueen, Derek Jarman, John Walter, Hilary Lloyd and Paul Maheke, the exhibition looks back on the 50 years since the introduction of the 1967 Sexual Offences Act, which partially decriminalised male homosexuality in England and Wales. The exhibition has emerged from curator Charlotte Keenan’s desire to subvert institutions’ heteronormative positions, re-engaging with queer histories and recognising the importance of rematerialising erased LGTBQ+ histories culturally. Giving visibility to the emergence of desire, activism and gender issues and homosexuality, the exhibition is progressive in redefining cultural relationships within this history, while being an informative archive of societal relationships to such issues. It takes a stand against heteronormative histories that have become concrete, as well as reconsidering how we unite artists curatorially.

Hatty Nestor: You are the youngest artists in the exhibition. Is this reflected in the curatorial choice to exhibit UK Gay Bar Directory as the opening piece in Coming Out?

Hannah Quinlan and Rose Hastings: In part, the show Coming Out was intended as a celebration of the partial decriminalisation of homosexuality and the achievements of queer artists in the past 50 years, but, significantly, it was also an opportunity to re-examine the present moment in terms of the development of the LGBTQ rights movement, and scope what work still needs to be done. Our work poses questions that bridge the gap between the past, present and future of queer culture in the UK: many of the bars we represented speak of the older, disappearing generation of gay bars, but we also show the emerging formations of queer space. We sought to use the videos to critically examine contemporary queer culture, aligning our focus with that of the exhibition. We were not sure if the decision to place us at the beginning of the show is linked to our age, but Charlotte Keenan felt that our work framed the discourse she sought to embody in the exhibition. 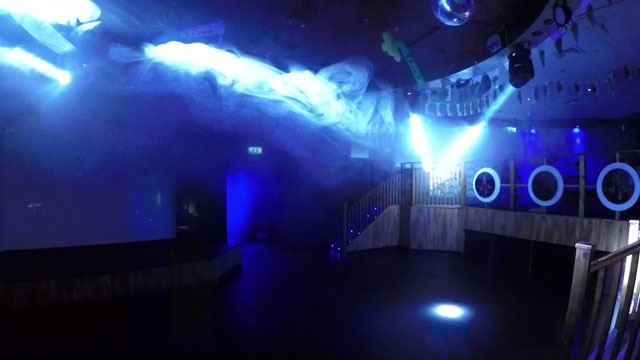 HN: Much of the filming in UK Gay Bar Directory will become an archive and is an archive of the recent state of gay bars across the UK. The closure of these spaces is often perceived as a symptom of austerity caused by government cuts. What do you think the function of your film will be in the future?

HQ/RH: We intended the Directory to be an archive that documents and explores the UK gay bar scene at a fraught period in its history, a time when the scene is especially vulnerable. From its conception, we envisioned the Directory as a public resource as well as an artwork. The Walker Gallery’s decision to acquire the UK Gay Bar Directory, and its support in making it available to the public indefinitely is essential in protecting the work’s status as an archive. The work was made with public money, and we always intended it to belong, securely to the public.

HN: How do you differentiate between an artwork and a public resource?

HQ/RH: There isn’t a clear binary distinction between the two. Our feeling is that the work could inhabit different inner worlds, as something that could be experienced educationally, as a primary source material for research, but also sensually and emotionally as an artwork. Saying that, there is no reason why education should not also be sensual and emotional and vice versa. When filming the gay bars, we encountered a million different problems – mostly that gay men didn’t want us in their spaces – so we developed this artillery of anger that steered us from documenting these bars in a more historically appropriate and didactic way. It informed, for example, our decision not to include a list of bars and cities alongside the video at the Walker. We were constantly slipping between two positions: on the one hand, we were creating a moving-image archive of gay bars in the UK; on the other hand, we were denying information that would allow this work be considered an archive in a more formal sense. 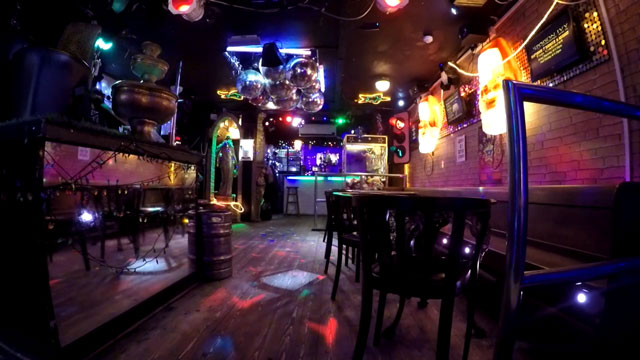 HN: Where did the incentive for the UK Gay Bar Directory originate? How was the filming of the bars was conducted? So much of the discourse and media surrounding these spaces is London-centric. Did you experience an inherent difference throughout the UK?

HQ/RH: We started filming gay bars experimentally in Newcastle, Hannah’s hometown, during a period of rampant club and bar closures in London, where we were living at the time. We connected the dots between the films we were making and these closures, and there was a certain urgency about the situation: it felt as if these spaces, so instrumental to the development of queer culture in the UK, were slipping out of sight, unmourned and unnoticed. We spent the next nine months travelling around the UK, having conversations and filming bars, clubs and LGBT+ community centres. We collected more than 10 hours of footage. Although each city we visited had its own unique scene, we were particularly drawn to the bars we encountered in Newcastle, Birmingham, Belfast, Glasgow and especially Blackpool. Away from the extreme wealth concentration in the south of England, particularly in London, we found bars that were lifelines for the communities they served, often taking on roles that the state failed to provide: sharing information about mental and sexual health, elderly care and shelters for the homeless, the abused and the unemployed. Obviously, issues of addiction complicate this narrative as these spaces facilitate issues of addiction within the community while also protecting and caring for those with nowhere to go.

HN: Were some of the bars easier to film than others? Did you have an idea of how many you wanted to film?

HQ/RH: We set out to film 170 bars in 13 cities; in the end, we managed to film just over 100. This is because many of those we found on the internet had closed; in other cases we were barred from filming because we were women, because of the bar’s policy or because the manager wasn’t in a good mood that day.

HN: Why did you decide not to include people when filming?

HQ/RH: In part, it was to focus on the spaces themselves and the personality that each bar emanates. We were interested in how these spaces contain elements of fantasy, operating outside  everyday reality. You could say that all nightlife venues are fantasy spaces, but we definitely feel this is intensified in gay bars, which are incredibly theatrical, excessive and exuberant in their design as standard. Historically, this is because gay bars were the only spaces where queer people could be visible, as if that visibility could exist only within the imagined. Now it seems that reality outside the bar is so grim that people would rather preserve this fantasy, not just out of safety but as an emotional necessity. We saw some new hybrids emerging out of these collapsing and closing fantasy spaces, venues that crossed somewhere between a Wetherspoons and a cheap Jamie’s Italian, open in the day and serving food, queer only in name. Perhaps this shift away from fantasy and towards capitalist realism is the only viable future of the gay bar in such financially uncertain times. To us, they just felt closeted.

HN: Coming Out also seems to aspire to be educational, particularly with its plaques explaining what “identity” and “queerness” are. With a certain discourse and education, these terms might not be so alien to the onlooker, but it feels historically momentous for an institution such as the Walker to be exhibiting this work, giving space to queerness identity and difference.

HQ/RH: The Walker is leading a new awareness and criticality that doesn’t necessarily exist in a meaningful way in other major cultural institutions, such as the Tate or the British Museum. Under Charlotte’s lead, the Walker seems to be calling out its own collection. This is a move so fundamental not only to dealing with social issues, but also with the UK’s colonialist present and history, a history that carries a dominant yet unacknowledged weight in most UK public collections.

HN: So Charlotte Keenan has used her position within the institution as a reflective tool to challenge how museums approach these issues?

HQ/RH: She is re-analysing what the collection is and what it means. She has been working with community and educational groups to facilitate this process. It feels radical that this isn’t happening behind closed doors, but in full view and in conversation with the public. Charlotte has changed the labelling in the museum, including its painting galleries, to reflect a more queer, feminist and anti-racist perspective. It’s a top-to-bottom method of bringing in that criticality and self-awareness throughout the whole collection. As artists, it feels incredibly important and gratifying to work with the museum at this time and be a part of the process of manoeuvring the collection towards a future more focused on social justice, rather than maintaining oppressive social hierarchies.

• UK Gay Bar Directory is at the Walker Art Gallery Liverpool, as part of Coming Out: Sexuality, Gender and Identity, until 5 November 2017. 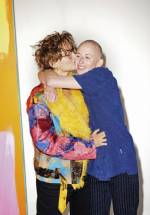