Robert Gober: The Heart Is Not a Metaphor

Robert Gober: The Heart Is Not a Metaphor

Robert Gober is perhaps best-known for his deceptively simple sculptures – in particular his sinks – but this large-scale survey of his work at MoMA, including drawings, print and photographs, draws us in to the intricacies of the artist’s storytelling

Robert Gober: The Heart Is Not a Metaphor at the Museum of Modern Art, New York, brings together more than 100 works by the American artist (b1954) that span much of his career, dating from the mid-70s to 2014. This large-scale survey features work from across an array of mediums and includes sculptures, drawings, prints and a series of immersive full-room installations. Gober is best known for his deliberately, yet subtly, handmade sculptures of sinks, doors, cribs and other household items and furniture, as well as human legs – complete with bristly black hair – that act as storytelling props to evoke themes of politics, religion and sexuality. In an intriguing turn, The Heart Is Not a Metaphor also notes Gober’s significant curatorial work since the 80s; the exhibition brings together works originally shown at the Matthew Marks Gallery, New York, in the 1999 exhibition Anni Albers, Robert Beck, Cady Noland, Joan Semmel and Nancy Shaver: Black and White Photographs 1975-77, which Gober curated.

The exhibition opens with an intimate but expansive introduction to Gober’s work. The opening room and entranceway contain a number of works, including Untitled (1975) – a painting of the artist’s childhood home – Untitled Leg (1989-90), Untitled Closet (1989) and X Pipe Playpen (2013-14), which all hint at the variation in Gober’s practice and his distinct ability to distil complex, often highly political or personal, ideas and moments into relatively simple, highly engaging and familiar sculptural forms. Storytelling, written into the introductory didactic text, is employed from the onset as Untitled, Untitled Leg and Untitled Closet signify the importance of both internal and external dialogue in narrative – the interior of a dingy closet, with no door reveals the artists proclivity to delve into his own past experiences; the leg protruding from the wall intimates that Gober himself is somewhere within the walls of the exhibition, perhaps throughout the installations, hiding in plain sight to reveal remarkably prescient details about his biography and the world he came of age in – a world marked by the Aids epidemic, the culture wars, discrimination against and movements for racial, sexual and gender equality, and a continuing culture of overseas warfare.

Beginning in the 80s, Gober made his sink sculptures, which are perhaps his most recognisable works. The sinks, which vary in form, shape and scale, began as elegantly austere objects with no plumbing or fixtures. Each sink – to describe a few: a deep rectangular kitchen sink, a petite powder-room wash basin, a Y-shaped sink with no discernible function – hangs from the wall like a floating tombstone, with a physicality that mirrors the heavy connotation. The association between sink and tombstone is one that comes directly to the viewer as Gober’s Two Partially Buried Sinks (1986-87) ominously peer into the gallery through a wall of floor-to-ceiling windows. The sinks are rooted in a lush patch of grass planted on a small exterior space outside the museum. To further the connection between sink and tombstone, these two sinks face Untitled (1986), a sculptural representation of a bodiless twin bed –perhaps in a hospital or rest home – slightly smaller than actual scale, neatly made complete with sheets and a fluffed-up pillow.

The exhibition also includes a series of room-sized installations that match floor-to-ceiling wallpapers with an array of sculptures. The highlight of these installations adroitly combines Gober’s penchant for macabre disembodied sculpture and a delicate yet vibrant painterly sensibility. Three sets of legs from the waist down, all Untitled (one from 1990 and two from 1991), emerge lying face down from walls hung with a repeating, optically patterned wallpaper (Forest, 1991) depicting a forest in autumn with brightly turning orange, yellow and red leaves. The silkscreened wallpapers, like much of his work, simultaneously remove traces of the hand and seem so strikingly handmade. Forest clearly depicts what was once a pseudo-photorealistic painting now layered and reproduced as a super flat background. Of the pairs of legs in the room, one, which is completely naked with visible and realistic hair, has a musical composition penned on to its backside (Untitled, 1990), another, complete with pants, socks and shoes, has three candles protruding from it as though they are organic elements (Untitled, 1991), and the third, clad in white underwear and dirty sneakers has a number of drains carved into its waxy flesh (Untitled, 1991). Finally, in the middle of the room rests an excessively large brown cigar (Cigar, 1991), cured and made from hundreds of tobacco leaves harvested from a Pennsylvania farm.

As the exhibition progresses, the sinks persist and act as starting points for ever more interesting and distorted sculptures and installations of beds, playpens, cribs, suitcases, guns and a fireplace, which engage the viewer in a process of open narrative interpretation. This open narrative includes moments of potential levity, as seen in Untitled (1997), where an oversized open suitcase resting on the floor  reveals a set of bars to a hidden subterranean tide pool in which water flows over rocks, seaweed and mussels around the feet of an adult figure who holds a young child just out of sight. However, these whimsical, yet bizarre and foreboding moments turn sinister as Untitled (1994-95) – a fireplace behind a set of bent, faux steel bars in which children’s legs removed just below the knee burn and smoulder like moist logs – faces and engages the suitcase directly.

While the juxtapositions are solely Gober’s, a number of works in the exhibition point to his interest in, and engagement with, the work of Marcel Duchamp (1887-1968). What comes to mind in particular is Duchamp’s Étant donnés (1946-66), a life-sized installation, made of plastic and wax, of a nude woman, visible from the neck down, as she holds an oil-burning lamp in her outstretched left hand while lying amid what must be a harsh bed of leafless branches. The tableau – on permanent display at the Philadelphia Museum of Art – which includes a cinematic view of a forested background, is visible only through two small holes carved into a large antique wooden door that looks as if it could lead into a dungeon. Gober’s sinks, open suitcase, fireplace and two later pieces from a multipart installation made in response to 9/11 2001, in which two slightly ajar doors – which flank a headless crucified Christ, who sprays two neat streams of water from his nipples into a hole carved into the gallery floor – provide a glimpse of a human figure in a bathtub and reverberate with a resounding Duchampian tone in display and materials. The connection between the two is also notable as Duchamp, like Gober – or more appropriately, Gober, like Duchamp, is known for his curatorial work.

The most intriguing part, conceptually and metaphorically, of the exhibition is the recreation of Gober’s 1992 exhibition at the Dia Center for the Arts, New York. The installation runs through three rooms on an easily missed side route through the galleries. Of the three rooms, two are darkened grey spaces with only newspapers and faux rat-poison boxes scattered throughout; the third and central room is replete with sounds, visuals and light. In this central room, Gober has installed eight of his sink sculptures, but this time they have water flowing through them as they act like fountains. The room, like earlier galleries, is covered floor to ceiling in bright repeating wallpaper, which in this case depicts a forest in lush full bloom (Untitled, 1992) – reminiscent of the camouflage patterns used in combat military uniforms – illuminated by a series of warm, yet intensely bright lights that ring the height of the room.  All three rooms incorporate stacks of old newspapers – photolithographic facsimiles with real and invented stories – bundled and stacked into piles on the floor with visible headlines. One such headline, below a picture of George HW Bush, reads: “Merchants of Hate.” And while the sinks and brightly lit installation instill a kind of hopefulness in the viewer, there is, due to the juxtaposition of newspapers and rat-poison boxes, a painful reminder that the US military uses incredibly sophisticated yet sadistic physical and psychological interrogation techniques such as waterboarding, isolation and noise and light exposure. Gober goads us, with a resoundingly pleasant and visually stimulating simulated environment to consider the evils that persist in US government policy. This recreated exhibition, another ode to Gober’s interest in curating and exhibitions, brings home a number of the latent political and social concerns and critiques that run throughout the works in the exhibition and it does so with an effervescent, yet pointed and easily missed clarity.

Gober is an accomplished and deeply dedicated artist and a successful curator in his own right; the combination of his varied experiences and interests inevitably play out in the composition of The Heart Is Not a Metaphor. The exhibition is bewildering and enlightening and is pervaded by criticality, generosity and intuition, and ushers in a profound sense of deep time, in which one becomes lost in Gober’s intricate storytelling. Throughout the pristine MoMA galleries, the curators Ann Temkin and Paulina Pobocha with Gober employ a series of simple yet deft touches, the most present and succinct of which are the didactic wall texts, one per room – written in conjunction with, and often by, Gober – that eschewed the overly complex jargon so often present in contemporary art exhibitions in favour of concise, descriptive language. The exhibition employs a near exhaustive, yet beautifully spaced and considered, number of objects, images and installations with which Gober plies the audience with numerous and profound metaphorical derivations, yet inevitably, as the title of the exhibition extols, the heart is not one. Leaving us to ponder: why not? 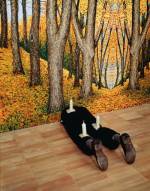 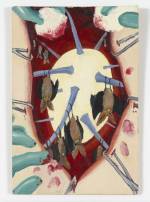 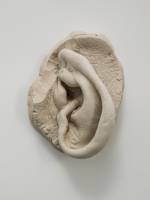 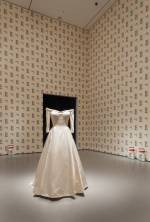 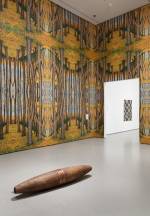 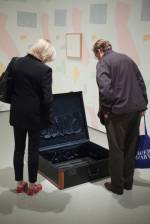