The artist’s latest exhibition confirms his confidence and ability to transform space and boundaries as he leads the visitor from the gallery to a nightclub, to mysterious doors and an odd sitting room

“We are always being put in scenarios and atmospheres and places, and some of these make us question what we really desire from life.” This was Richard Sides (b1985) commenting on his installation Stop Killing My Buzz (2012) at the Zabludowicz Collection in 2012. Fast-forward to 2016 and these words still ring true in his latest exhibition, Invisible World, at Carlos/Ishikawa. Sides has continually commented on how the relationships we have with our environments invariably affect our personal desires and the course in which they may or may not manifest themselves. In the context of his exhibitions, he has always displayed an ontological awareness of how the space can trigger particular feelings and emotions in the audience if used in certain ways. This exhibition fully demonstrates Sides’s confidence and ability to transform the space to support themes concerning temporality, spatiality, presence, desire and ontology.

On entry, the visitor will come across a ringbinder by the door. This is not a guest sign-in book, but the beginning of the show. The ringbinder, entitled Director’s Foreword (2016), is packed full of newspaper and magazine clippings interspersed between Shrigley-esque illustrations. This collagic journal acts as the blueprint for the exhibition by being confusing, illuminating (when not confusing), satirical and surreal. Insight leads to intrigue with this work, and it is surprising that there are not more artists exhibiting this sort of invitation into their mind and process. But then again, Director’s Foreword stands up as a strong piece in and of itself in ways other artists would struggle to match.

Walking into the next room conjures up similar sensations to that of a music venue in full swing at 1am. Thumping electronic music and multicoloured lighting see Sides reappropriate dance and nightlife culture, transforming the gallery space into that of a club. Sides started out as a musician – a career he still pursues – and has always been interested in social event spaces in general. Having always found music venues uncomfortable places to be in, he has often sought to create installations that show his idealised version of what an events space could be. There is an adage that every film is made by the director simply because it is their idea of a good film: if anyone else likes the film, that’s a bonus. The same could be said here for Sides with his take on a social events space.

With the lights changing colour intermittently and the music playing constantly, the viewer looks upon a new eight-part series of works called Party Politics (2016). These collagic works echo the wit of Director’s Foreword, but contain more focus on certain themes. Iconography of popular visual culture is deployed throughout this series, including cut-out images ranging from Christopher Reeve’s Superman to Gene Hackman playing the saxophone in Francis Ford Coppola’s The Conversation. Celebrity culture is addressed here, but only subtly, and is by no means the main focus. Perhaps more eye-catching are the pornographic images Sides has included throughout the series, through which his interest in human desire is expressed. But it is not the pornography on its own that heightens the viewer’s intrigue, it is the placement of the images and what surrounds them. In Party Politics, Sides has used pornography to add new meaning to otherwise straightforward images. In one work, an image of a woman giving fellatio is placed directly above the words Choose Life logo – a slogan made famous by Wham!’s George Michael and Andrew Ridgeley, who wore Katharine Hamnett T-shirts bearing the logo in their music video for Wake Me Up Before You Go-Go in a bid to promote an anti-drug and anti-suicide campaign. Another set of pornographic images depicting anal intercourse are layered around a newspaper cutting of a photograph of David Cameron with part of a headline that reads “pounds and pence, but people”. In a different piece in the series, Sides has featured the ventriloquist Keith Harris, who died last year, placed beside an image of the solar system, with an image of a ballerina placed directly above him.

Over to the next room and the viewer is confronted with two doors. The first door is illusionary. It is a new acrylic on canvas piece entitled Emergency Exit Door (2016). This work is placed ominously in the centre of the back wall of the space and, at first glance, it genuinely looks as though Carlos/Ishikawa has just had an emergency exit installed. The work skilfully encompasses Sides’s interest in temporality and spatiality; symbolising the opportunity to move from one area to another in a time of need. The other door is very real, but what it leads to is, like Emergency Exit Door, more representational than anything else. Go through the door and you enter a space resembling a living room, complete with armchairs, carpet and a television. In the corner of this partitioned-off room is another comment on consumerism. It is a portrait called Since 1886 (2016) that shows a small detail of the Coca-Cola logo. The focal point for this room, however, and indeed the exhibition, is what is on the television screen – Invisible World (2016). This video installation appears to be influenced heavily by the work of James Turrell in terms of the colour selection (hot pink, purple, and so on) as well as formalistically through shape. Invisible World sees Sides deals again with temporality and spatiality with a portal or door leading the viewer from one room to another room seamlessly, and constantly. Almost like the exhibition itself. 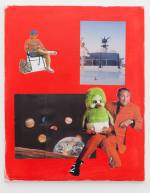 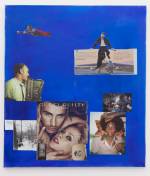 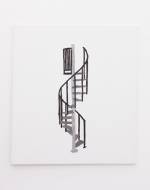 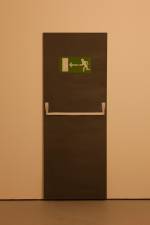 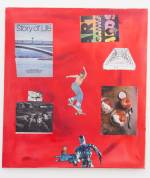