In its Arts Annual: Fine Art, Newark Museum was true to its roots.  A wide array of theses, media and materials by 40 culturally diverse local artists of all ages showed that the museum is sensitive to the times and the people it serves

The huge mural Imaginative Realism: The Native Sun was one of the first works encountered in Ready or Not, the museum’s summer exhibition. By the Newark-based collective LNY + Mata Ruda + NDA, it is a blue-skied, brightly coloured, collaged, multimedia panorama of the city’s skyline and several of its landmarks. Amplified by street maps, it is further decked out by eye-catching cameos of its ordinary citizens as well as VIPs past and present, including African American poet and ardent activist Amiri Baraka, Kenneth Gibson, who in 1970 became Newark’s first black mayor, and the lifeless body of a young boy. Two white-hot suns, rising or setting, emblazon two circles of orange sky, emblematic of this beleaguered city of triumphs and defeats, an apt, visually captivating kickoff to the equally captivating all-Jersey lineup that followed.

The credit for the 2014 New Jersey Arts Annual: Fine Art (it alternates with a craft edition) goes to Shlomit Dror, the museum’s consulting curator of American art, who organised and judged the show with Rocio Aranda-Alvarado, curator at El Museo del Barrio in New York. The selected works, all recent, quite a few made for the annual, presented a wide array of theses, media and materials by 40 culturally diverse artists of all ages. The works were more ambitious than those often found in such roundups, some based on formal issues, but most on the urgent realities of the artists’ own lives, including tough themes of race, gender, poverty, migration and environmental and educational concerns, their interpretations refreshing. Hailing from throughout the state, the majority of participants live in Newark, Jersey City, Hoboken and other localities near New York City. Even so, Ready or Not demonstrated that artists who would normally gravitate towards major art centres, but are currently forced (or prefer) to live outside them because of prohibitive costs – can form flourishing alternative communities. Enabled by more readily available means of access and supportive local and regional art scenes, they are congregating elsewhere, location no longer quite as decisive a factor for success.

In addition to the principal galleries, the show overflowed into a few smaller galleries that were situated at a remove, interrupted by other installations, disruptions made more emphatic by the museum’s architectural distractions. Works hung on outside walls between galleries and tucked into disparate spaces as a way to link the exhibition (such as Christina Tenaglia’s taut abstract constructions and Milcah Bassel’s appealing, lilliputian ladders) more often than not felt orphaned, left to fend for themselves in the general bustle.

That said, architectural infelicities should not be blamed on the curator, especially given the nature of this kind of group show. So while it sometimes felt like a series of separate projects – one small room of landscape art was on another floor altogether – the works overall were strong enough to minimalise the disconnect and, wherever possible, Dror established a dialogue between them. For instance, in a city with a majority African American population, hair is a resonant subject; one such work, by Jennifer Mack-Watkins from 2012, was an ironically pastel silkscreened image of the head of a young woman flaunting an afrohawk, a hairdo that is a hybrid of an afro and a mohawk. Another was by So Yoon Lym, a series of six acrylics on paper from 2009-11 that, brushstroke by brushstroke, precisely recorded in close-up the intricate braiding of her students’ hair, turning a cross-cultural statement into an abstraction as well as a representation. Nyugen E Smith’s contribution was BundleHouse: Borderlines #2 (2012), a delicate ink and thread work on paper that recounts a narrative of borders and temporary dwellings, of transience and migrations.

Other highlights included Yucef Merhi’s arresting Facial Poetry (2014), a sleek, interactive computer installation projected on three screens programmed to recognise movements of the lips, eyebrows and body; when sensed simultaneously, one of many poem by the artist appeared. Jim Toia’s ongoing Petri Island Project, begun in 2010, is a twinkling, columnar cascade of petri dishes that he supplies to viewers, inside which are their answers to a question he asks: what does an island mean to you? Another interactive piece was by jc lenochan, consisting of a desk, two chairs, a shelf of books and an alphabet chart. The texts were selected from the books in collaboration with his students at Newark Arts High School and viewers were asked to sit down and read them in order to explore the mechanisms of disseminating and acquiring information, misinformation and disinformation. Andrew Demirjian’s Morning Light (2014) is a jumble of discarded analogue television monitors that he resuscitated to play luminously coloured abstract patterns, a nod to Nam June Paik, but with content that comments on consumerism, production and obsolescence, technological memento mori that, in turn, refer to our own inevitable cycle of senescence.

One of the most dramatic ventures was the very beautiful, somewhat eerie video and sound installation by Ariel Efron and Lucas Vickers. Activated by the arrival of the viewer, it transformed the vestibule of the museum’s original entrance into a mysterious portal, the bronze doors appearing to open, accompanied by a rush of sound that suggested water, while a flow of light illuminated and liquefied the steps leading downwards toward them, the void beckoning as if an invitation to cross into another dimension. Another, more graphic site-specific project was by Jason M Stewart. Called Sensory Threshold (2014), it imposed a linear pattern that suggested a kind of mapping, the putting down of a Daedalian thread through part of the museum, painted over and accentuating the existing decor.

The first installation that a visitor to the museum was most likely to see, as well as the last, was Dahlia Elsayed’s jaunty, hand-made yellow flags.  Like those designating construction sites, they ringed the outdoor courtyard next to the main entrance. Inscribed on the fluttering flags was a poem composed by the artist, each flag conveying a phrase. It was written in tribute to a much earlier, prescient essay about the need for museums to be open-minded and innovative, sensitive to the times and the people they serve, authored by John Cotton Dana, Newark Museum’s esteemed founder, underscoring what the annual is about. Elsayed’s poem talked about the values of the museum Dana established in 1909, her poetic construction flags saluting art and the city of Newark – all works in progress. 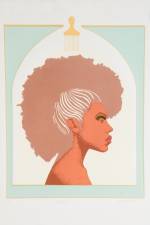 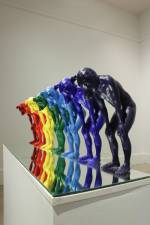