The French artist and illustrator explains his love of collecting, his collaboration with Patrick Modiano and why he stopped working for magazines 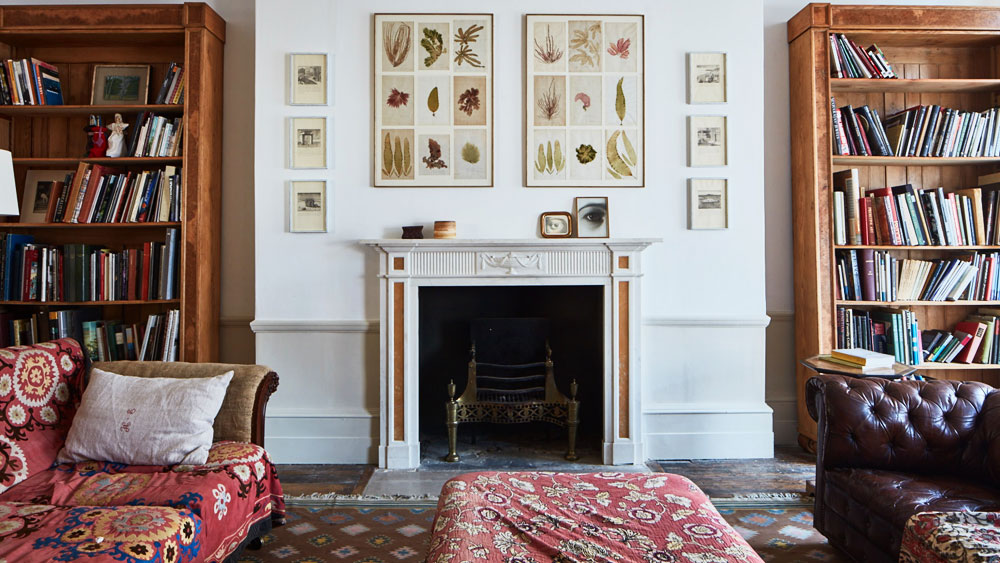 The artist and illustrator Pierre Le-Tan (b1950, Neuilly-sur-Seine, France) started collecting at the age of seven. Since then, he has never stopped, amassing a heterogeneous collection of artworks, antiquities and books in his Parisian home. It is fitting, then, that his latest exhibition in London presents itself as if it were a collector’s apartment, filled to the brim with lavish furnishings and objets d’art. The Collection of Monsieur X, at the Tristan Hoare Gallery, London, is the sort of presentation that asks you to take some time to linger, to sit back on a leather Chesterfield and examine the surrounding profusion of objects and artworks. Drawn from the personal holdings of Le-Tan and the writer and horticulturist Umberto Pasti, who curated the exhibition, it is a rich spread. Exhibits, presented on tables and in a Kunstkammer-esque cabinet include a fragment of a foot from Ancient Rome, an Indian Buddha from the fourth or fifth century, pressed seaweed in delicate colours, a Qing dynasty sculpture made from wood and dried mushroom, an Olmec conch trumpet and an Eadweard Muybridge collotype. 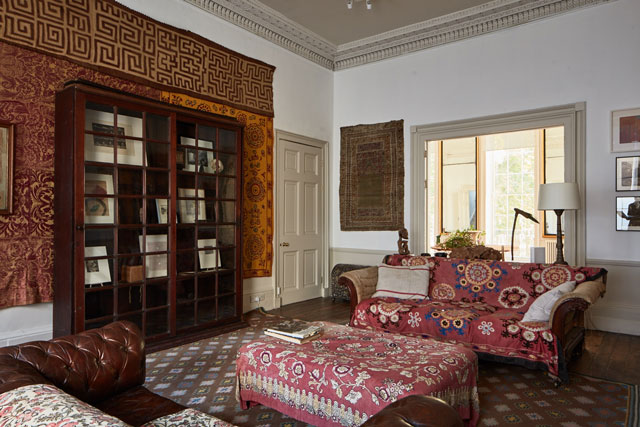 Le-Tan’s drawings depict this hoard in often humorous detail. A baroque putto stares at the back of a passerby’s head, while a bust of Holofernes shares space with a purple-haired troll. Often, they are drawings not just of precious objects, but rather of how such objects are interacted with. Hands and the back of hands make frequent appearances, calling up actions outside the frame. As with the exhibition as a whole, the drawings are domestic in the sense of being works that it would be pleasant to live alongside. 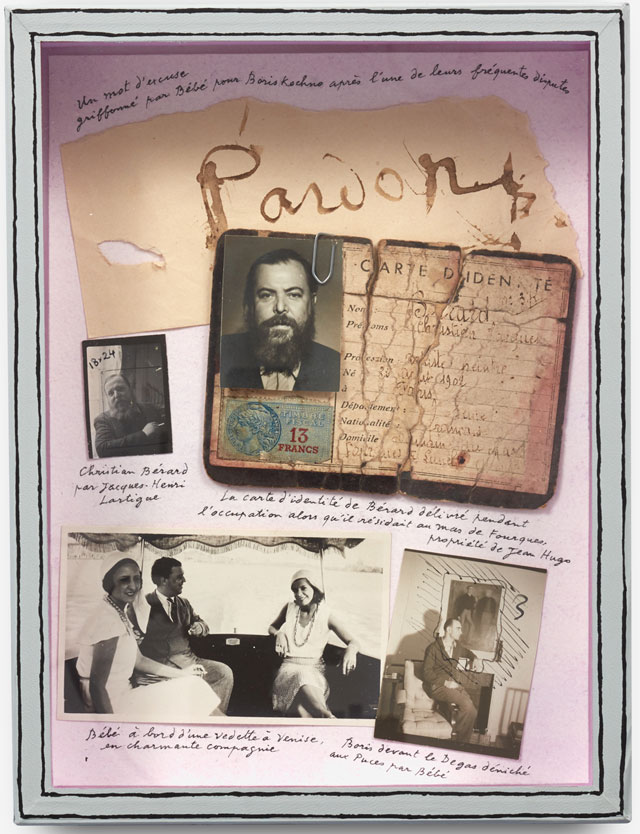 Le-Tan has had a storied career as an artist and illustrator. A lifelong resident of Paris, his work first flourished during the heyday of American print magazines in the 1960s and 70s. He drew his first New Yorker cover at the age of 17, and worked for a roll call of America’s most prominent publications, including the New York Times, the Atlantic, Harper’s Bazaar and Vogue. His illustrations, drawn in cross-hatched India ink or painted in watercolour, became a defining feature of the New Yorker’s print aesthetic. Ranging from tranquil still lives to window views from within quiet domestic interiors, they are both restful and a little eerie. In one, tiny pieces of furniture sit alone on outsize tables, while another sees the sun replaced by a rising heart. 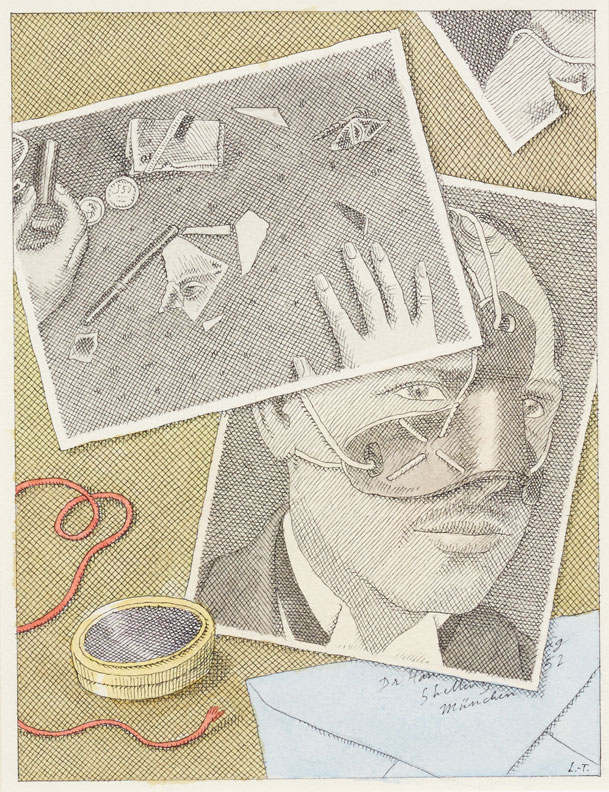 Parallel to his career in publications, Le-Tan has produced theatrical set designs, adverts for fashion houses, film posters and covers for books by authors as diverse as Marcel Aymé and Raymond Carver. Perhaps the most significant result of his latter career, however, is a series of collaborative books. In 1981, he produced Memory Lanewith the Nobel Prize-winning novelist Patrick Modiano; Le-Tan’s drawings perfectly match the haunted, pensive aura of Modiano’s writing, which often depicts a noir-tinted contemporary Paris, marooned in the immediate postwar era. In the decades since, Le-Tan’s books have included Album(1992), a sort of mental scrapbook detailing encounters with assorted individuals and works of art; a series of whimsical volumes with Pasti; and Quelques Collectionneurs (2013), a guide to a series of art collections. 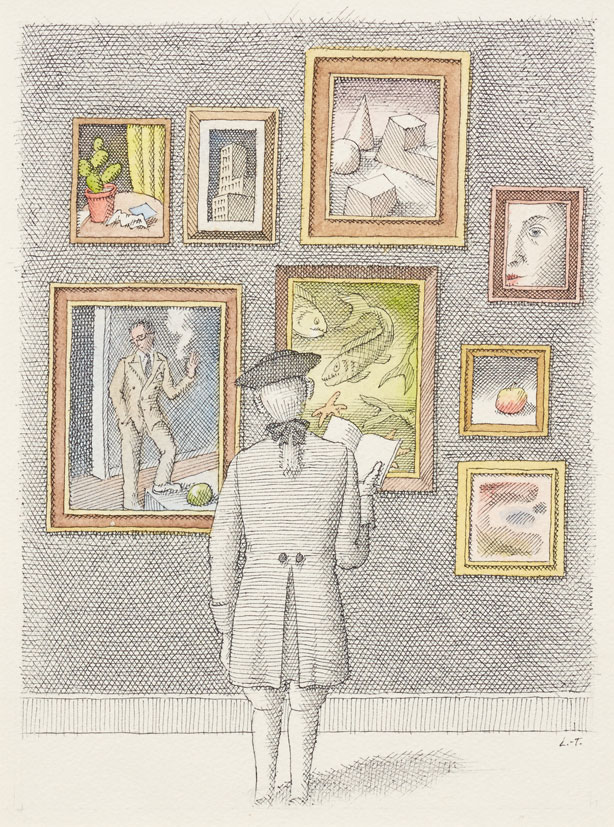 An appreciation of art is at the core of Le-Tan’s work. This year, he provided images for a window display at Fenwick on Bond Street, celebrating 250 years of the Royal Academy, which included representations of works exhibited by the institution, including Michelangelo’s Taddei Tondo, JMW Turner’s The Fighting Temeraire and Damien Hirst’s The Physical Impossibility of Death in the Mind of Someone Living. To present his own work as surrounded by the eclectic creations of others, then, perfectly suits Le-Tan’s practice.

Joe Lloyd: The exhibition at the Tristan Hoare Gallery is modelled after the apartment of a certain Monsieur X, a fictional collector — or so I presume.

Pierre Le-Tan: Yes, he’s fictional! We really didn’t want to have an exhibition in a white space, so we tried to make it look like somebody’s flat, a domestic space. All the objects here have either come from me or Umberto, and the books from Tristan Hoare.

JL: Collectors and collections recur in your drawings. When did you start collecting?

PLT: When I was a kid, really – from the age of about seven. My father also collected, but not as compulsively as me. And he was a painter, too [Lê Phổ, a Vietnamese artist known for his floral still-lives], so I was brought up in the middle of art. It was important to me from the beginning. 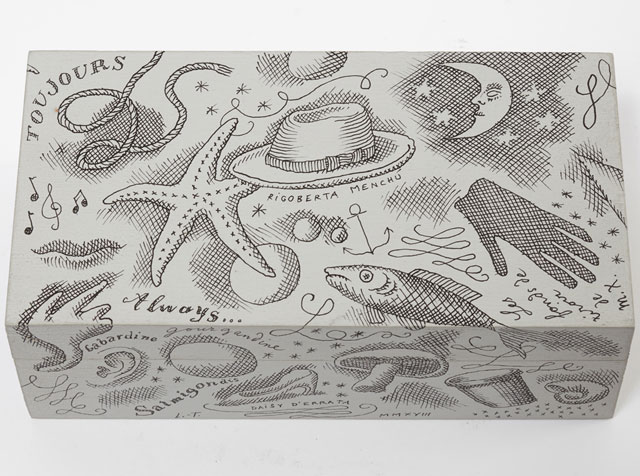 As a boy, my father used to give me bits and pieces. Then I became interested in Japanese weapons and armour, which I started collecting at around the age of 14. That led me to become very interested in Japanese art, in ukiyo-e prints. And then, I discovered 20th-century painting. But what fascinates me, really, is anything that I find beautiful. For years, I’ve been eclectic in collecting all sorts of things: antiquities, ceramic art, Chinese art, modern paintings and drawings of a particular kind, photographs. And I’ve got thousands of books as well.

I can’t stop. Some people buy things to decorate their houses, and when they are done they stop. Unfortunately, I’m not like that – I keep buying things, even when I have nowhere to put them.

JL: This exhibition, with its profusion of objects with numerous different provenances, reminds me a little of Sir John Soane’s Museum in Holborn.

PLT: Of course, yes! And also the Pitt Rivers in Oxford, where objects of all kinds are brought together.

JL: As the son of a painter, why did you choose to work in drawing?

PLT: I don’t know, exactly. It could be because all my paintings end up looking like drawings! So drawing, really, has come to be my medium, in India ink and occasionally watercolour. I do sometimes work differently, but drawing is where I feel most comfortable. 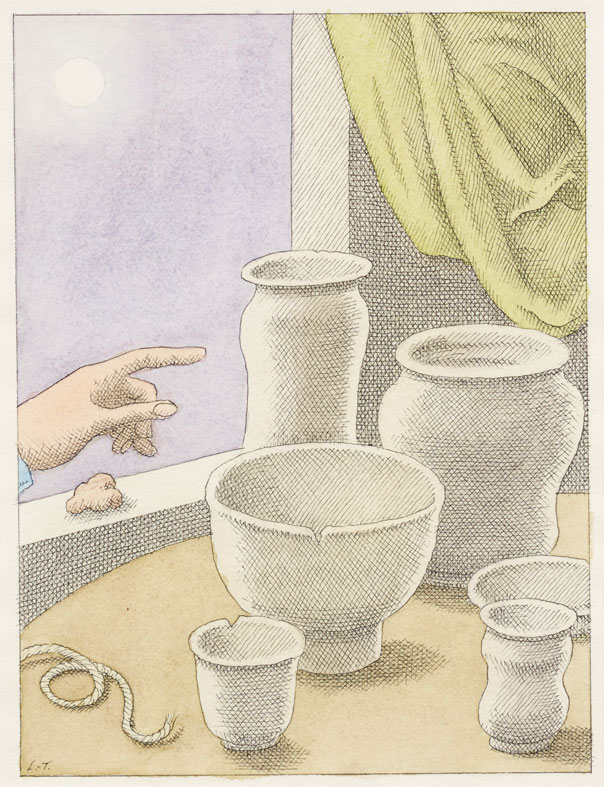 JL: This exhibition abounds with colour. Your exhibition earlier this year, in Galerie 11 Columbia, Monaco, on the other hand, presented works in black and white.

PLT: I always start in black and white, then I add colour. The Monaco exhibition was in a very contemporary art gallery, a white cube, so I thought it would fit. Here, though, I wanted to reflect this beautiful room.

JL: Many of the illustrations in the exhibition depict objects that are present, and you have previously drawn paintings. What do you gain from such transference?

PLT: In part, it’s because I’m so keen on works of art that I enjoy it. But it’s also an interesting process – when you translate something across, you come to understand the painting. And I also like to draw from life in general. For instance, [in 2016] Le Monde asked me to make a drawing, called “les pays imaginaires”, imaginary countries, for its magazine each week over the summer. Instead of creating new places, I drew them all from real things, and then, through arrangement, made them imaginary. It’s good to start with something real. 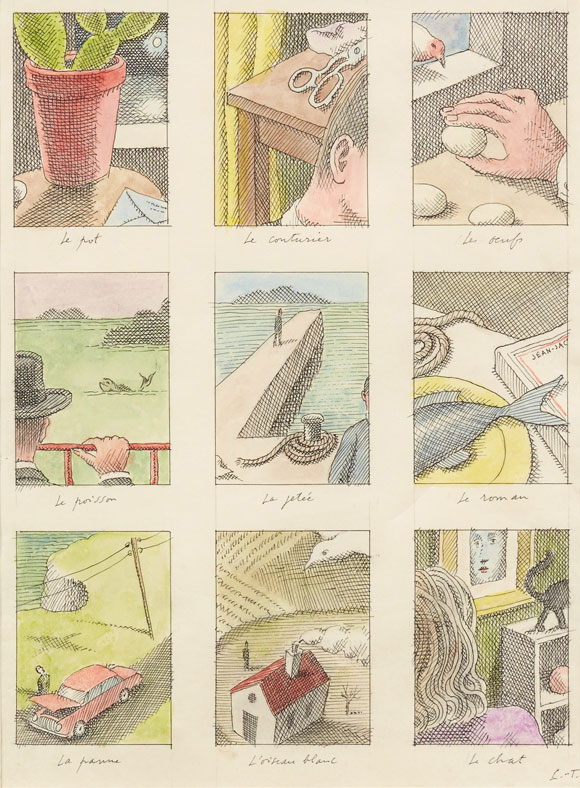 JL: You began your career illustrating for a range of major publications, including the New Yorker and the New York Times. How have you seen the press change?

PLT: It’s changed a lot. I started really working for magazines in America, in the late 1960s and 70s; with the New Yorker, I started 50 years ago. I would go to New York for a few months and create a lot of work. There were very nice art directors, who wouldn’t tell you what to do and gave you a lot of freedom, and it was well paid.

It now seems another world. I hardly ever work for magazines now, unless it’s one I know especially or is on a subject that is particularly interesting. It’s changed so much, and it barely pays anything.

JL: You have worked on numerous books throughout the past four decades. Do any stand out as particular favourites and, if so, why?

PLT: I have, indeed, worked on many books. I have a particular fondness for Memory Lane, which I collaborated on with Patrick Modiano. It is now 37 years old. 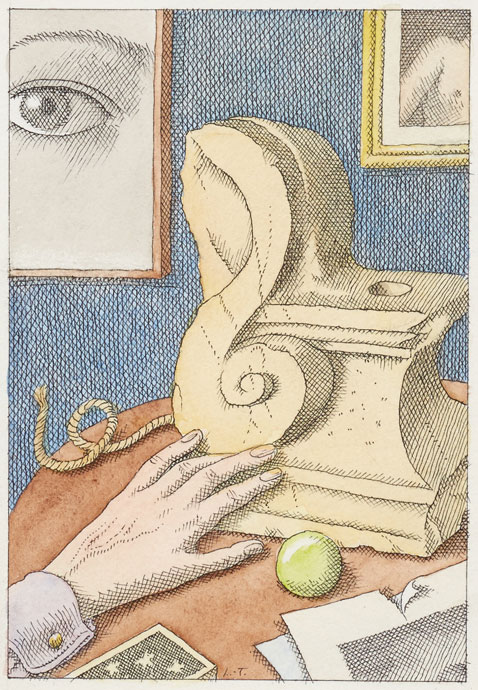 JL: How did Memory Lane come about, and how was your process of collaboration?

PLT: Patrick is an old friend; I’ve known him for about 40 years, and we share some of the same obsessions. We decided to create a book together. We planned it from the beginning, before he began writing it. So, it’s not what you would call simple illustration, but rather drawings alongside the text.

JL: I feel many of your drawings, akin to Modiano’s novels, feel somehow out-of-time, removed from the contemporary world. Is this a conscious effect that you strive for?

PLT: This isn’t a conscious effect, this is the way I draw. I don’t consciously strive for a particular effect, it is natural.

JL: And, like Modiano’s, so much of your work seems intrinsically bound to Paris.

PLT: I would say I’ve been living in Paris all my life, really. I live in the seventh arrondissement, just behind the Palais Bourbon – a beautiful part of town. But I’ve spent a lot of time in London, really a lot of time, as my first wife was English. I’ve always liked it, and many artists from it. Take Fitzroy Square – a marvellous place. And there were lots of artists I admire who worked [in Fitzroy Square], such as those at Roger Fry’s Omega Workshop and Rex Whistler, an absolutely charming, very witty artist who worked on book covers and the murals at the Tate Britain restaurant.

JL: The exhibition was curated by Umberto Pasti, and contains many of his objects as well as your own. How did you work together in the show?

PLT: We’re very old friends. And we have quite similar tastes, with different emphases but complementing each other. We talked and talked on the phone about it, and then I arrived here and started arranging the place without Umberto, and then Umberto came and added his touches. It just happened naturally.

• Pierre Le-Tan: The Collection of Monsieur X is at Tristan Hoare Gallery, London, until 17 November 2018.