With its iconic architectural silhouette atop the hills of Los Angeles and its status as one of the most richly endowed and premier art institutions in southern California, the J. Paul Getty Museum has become a dominant arbiter of art and culture for Los Angeles in the 20th century. It is indeed fitting that the Getty Foundation should spearhead the large-scale collaborative initiative, Pacific Standard Time: Art in L.A. 1945-1980, in which over 60 cultural institutions from the greater Los Angeles area celebrate the city’s artistic heritage and contributions to the art world.

The plethora of exhibitions, installations, commissions, and performances associated with this collaboration explore the diverse artistic innovation that accompanied widespread social change in Los Angeles during the decades following World War II. In partnership with the Getty, other notable cultural institutions including the Los Angeles County Museum of Art, the Museum of Contemporary Art, the Hammer Museum, the Los Angeles Philharmonic, and a wide range of galleries have launched exhibitions and programmes to investigate topics such as the L.A. Pop Art movement, the rise of modernist urban architecture, and the developments in L.A. design, to name a few.

Among the exciting offerings that were launched in October 2011 and will continue through March 2012, the J. Paul Getty Museum is host to Pacific Standard Time: Crosscurrents in L.A. Painting and Sculpture, 1950-70, a comprehensive survey of the predominant artistic developments that contributed to a unique Los Angeles art scene. Through its presentation of numerous stylistic trends and periods of technical experimentation, including hard-edge painting, large-scale ceramic sculpture, assemblage, process painting, Pop Art, conceptual art, and Light and Space art, the exhibition makes the claim that “the history of modern art looks very different when viewed from the West Coast”.1

As the title of the exhibition suggests, one of the primary goals of the curators is to emphasise the distinct position of Los Angeles, both geographically and metaphorically, as an environment that simultaneously fosters and is shaped by constantly evolving crosscurrents of influence. Building upon the relaxed, informal, and experimental characteristics of the city in the popular imagination, the exhibition exposes the vibrant creative milieu of Los Angeles-based artists whose work in the post-war period possessed an openness, diversity, and fluidity of social, generational, and cultural boundaries. A concerted effort to distinguish this particular manifestation of California art production from the more familiar New York modernism is evident in the repeated references to specific Los Angeles sites, scenes, and personas throughout the exhibition. One entire room, for instance, features enormous blown-up reproductions of black and white photographs that depict iconic panoramic vistas of Los Angeles. These cityscapes, with their nod to the glamorous film industry of the 1950s-60s and the glory days of the entertainment capitol, provide a nostalgic backdrop for a large-scale film installation by the American experimental filmmaker Louis Hock (b1948). Excerpts of Hock’s 1979 film, Southern California, are showcased as a video triptych in which footage of utopian views of the urban landscape heighten the sense of regional prominence.

In a further gesture of civic homage, the exhibition opens with a striking sculptural work, Tap Dancer (1967), by the Los Angeles native, Stephan von Huene (1932-2000). Constructed from wood, leather, metal, and various mechanical components, von Huene’s piece initially appears as a surreal representation of a tap dancer’s legs captured in a moment of static disembodiment on top of a plain wooden podium. Audible gasps of surprise echo around the gallery as viewers are taken off guard by the sudden animation of the legs into mechanised and percussive tap dance movements. Dancing between artistic influences as various as surrealism, folk craftsmanship, and early animatronics, von Huene’s sculpture is an evocative work well-suited for the entrance of the exhibition since it reveals both a fascination with a specifically Los Angeles brand of entertainment history through its reference to memorable “hoofers” of the bygone early film era and a lively interplay of stylistic quotations.

Following this dramatic solo piece at the beginning of the exhibition, Crosscurrents is divided into a series of six large galleries organised loosely in the following categories: hard-edge painting and ceramic sculpture, assemblage sculpture and collage, the “L.A. Look”, advanced modes of painting, and perception and process. The first galleries combine the colourful, yet geometrically stark paintings of artists working in the hard-edge style, such as Karl Benjamin, Lorser Feitelson, Helen Lundeberg, and John McLaughlin, with experimental and often colossal ceramic sculptural works of Peter Voulkos and John Mason that were made possible by novel firing and glazing techniques. Progressing from these instances of early West Coast artistic and technical innovation, a large gallery focuses on the impact of the city’s burgeoning industrialism in the 1950s-60s through the complex assemblage and collage constructions of Wallace Berman, George Herms, Edward Kienholz, and Betye Saar. Often drawing upon personal history and traumatic political events, these works present visually intricate modes of social commentary and exist as a physical distillation of the process of urban transformation that the city was experiencing at the time.

In a foreword to the extensive catalogue that accompanies the exhibition, David Bomford and Thomas Gaehtgens, Directors of the J. Paul Getty Museum and Getty Research Institute respectively, have commented that “In Los Angeles, a very distinct engagement with European artistic traditions merged with California art’s unique expression of openness, mobility, modernity, individuality, light, and colour to create a new aesthetic, one well suited to an innovative style of West Coast living”.2 The remaining galleries explore this distinctive “L.A. Look” with paintings, sculptures, and multimedia installations emblematic of the city’s sprawling spaces, bright light, automotive culture, beach landscapes, celebrity fascination, and commercialism. Building upon these specific aspects, or assets, of Los Angeles, artists such as Vija Celmins, Judy Chicago, David Hockney, John McCracken and Ed Ruscha present California popular culture filtered through the artistic imagination, thus allowing art to participate in this process of branding the city. A final gallery displays a series of dazzling light installations and luminous sculptural works by the likes of Bruce Nauman, Larry Bell, Mary Corse, Helen Pashgian and De Wain Valentine. In combination with more conceptual pieces, such as John Baldessari’s Quality Material (1966-8) or Norman Zammit’s North Wall (1976) in which the sequencing of painted colours is based on mathematical logarithms computed by cutting-edge California Institute of Technology computers, these works expose the indisputable impact of California’s technological advances in the science and aerospace industries on the development of artistic practices in Los Angeles.

With over 75 works on display from this wide range of stylistic experiences, the exhibition is extensive – overwhelming at times, yet highly enlightening and admirable in its contribution to what still remains a fairly unwritten history of West Coast modernism. A concerted effort has been made to link Crosscurrents with other important international art contexts through related exhibition events at the 54th Venice Biennale in 2011 and the exhibition’s future tour to Martin-Gropius-Bau in Berlin. Ultimately, just as this Getty exhibition attempts to chronicle the artistic innovation that shaped a specific Los Angeles-centric art scene in the 20th century, its larger Pacific Standard Time project plays an active role in shaping the city’s future artistic legacy on the world stage.

1. From the introductory text panel of the exhibition. 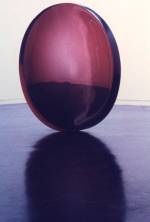 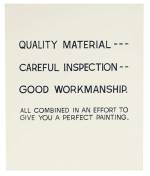