Eisenman’s Groupings of Works from Fountain, three sculptures joyfully spouting or spitting water into the air in sparkling arcs, were unveiled last month at the Fenway in Boston. The extreme likability of these oversized creatures is sure to make them crowd pleasers 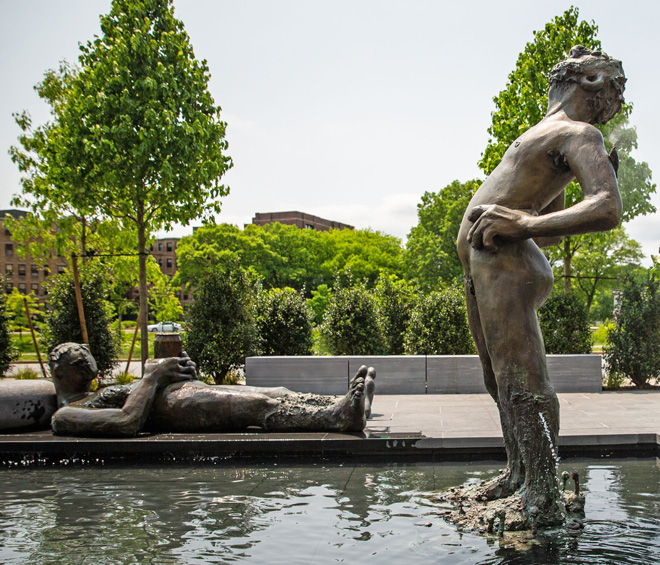 Although Brooklyn-based artist Nicole Eisenman (b1965, Verdun, France) has long been admired as a painter, it is her sculptures that are making the bigger splash at the moment. It is a splash that is delightfully literal in some instances, as in Boston, where her Groupings of Works from Fountain was unveiled on 2 June.

Located at 401 Park adjacent to the Fens, part of the Emerald Necklace system of parks designed by Frederick Law Olmsted in the late-19th century, Eisenman’s fountain is sited on a one-acre oasis tailored for it, near the colossal, recently renovated building that is now home to the new Time Out Market. Even with traffic whizzing by, the parkway is just distant enough that the illusion of a pocket-Arcadia is viable, the juggling of urban and sylvan a nod to Olmsted’s original principles. 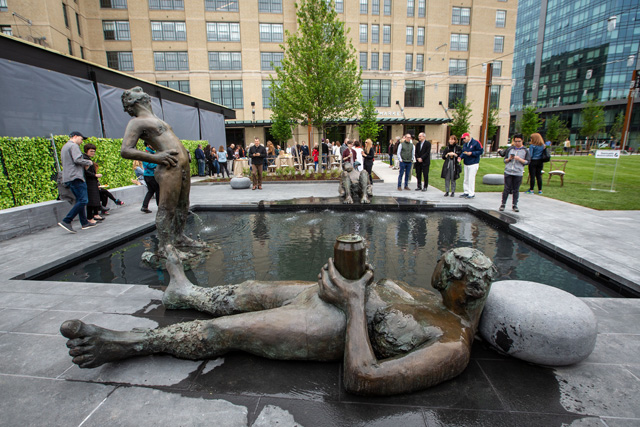 The precursor to her current sculptural projects were the plaster figures and heads she exhibited with her paintings in an exhilarating and surprising mix at the 2013 Carnegie International in Pittsburgh. This was followed by Sketch for a Fountain, reimagining her “scruffy bohemians” descended from exalted Greco-Roman deities for the decennial Skulptur Projekte Münster in 2017. A highlight of the Münster exhibition, it seeded two other projects. One was for the Nasher Sculpture Center in Dallas, which has just acquired Sketch for a Fountain, the group of five figures now serenely gracing its garden’s pond. The other was the Boston fountain, commissioned by the real estate developers Samuels & Associates. In addition, Eisenman, a MacArthur fellow, is currently represented at the Whitney Biennial with a head-turning outdoor installation of enigmatic, larger-than-life creatures that often split the difference between the human and not. And her paintings and sculptures make a strong showing at the 58th Venice Biennale: May You Live in Interesting Times. 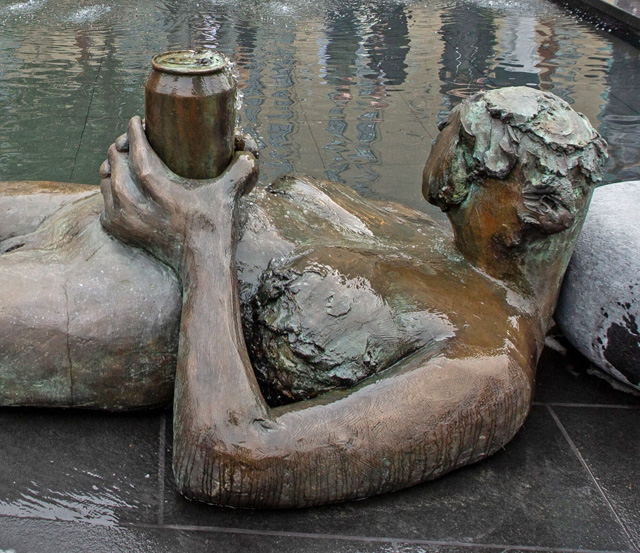 Based on the Münster work, the fountain at 401 Park has three figures instead of the original five, all cast in traditional bronze. Overscaled, their hands and feet are exaggerated, as if to emphasise the importance of those particular body parts in a tribute to physical labour, to those who work on their feet and with their hands, including artists. These figures (her first public installation in a venue not overseen by an art institution) blend the sly, the subversive, the playful, the fantastic and the oddly tender in a customised combo that is a signature, although here the subversive is tamped down, the grotesque is missing. Her three “guys,” as she referred to them, are lounging around a pool, joyfully spouting or spitting water into the air in sparkling arcs from various areas of their more or less non-gendered bodies. Mostly smoothly fleshed, their legs seem furred or foliated or mucked with mud, as if part fauns. Two are casually sprawled out, reclining on their backs, one holding a beer can over its stomach that foams over with water while the other raises itself slightly on its elbows, head raised, in a pose reminiscent of an Aztec or Mayan chacmool. The third statue is standing, legs astride, head thrust exuberantly back, sweating water, while a snail on its shoulder lets off steam at intervals. Part of the great appeal of these “guys” is their extreme likability; they make you smile. Eisenman said she wanted to sculpt images that the public could identify with, and she succeeded. Schematised, generalised, cartoonish, they are also droll, companionable, solid, their poses familiar, but with little twists that add spice. 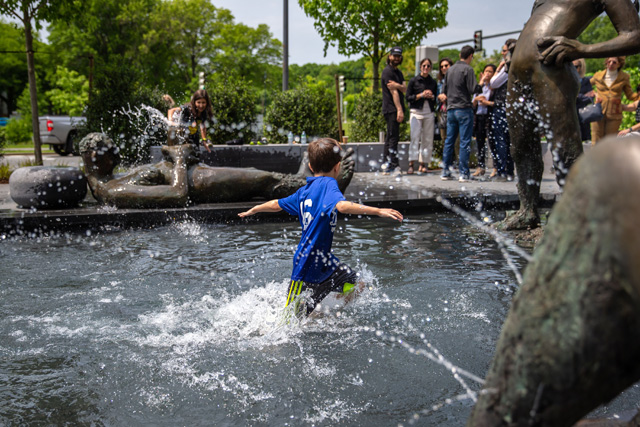 And it is a rarity – a fountain that welcomes the public to use it, not a teaser merely to be looked at. At the artist’s insistence, the minimalist, elegantly rectangular pool was constructed as a shallow wading pool, to be entered. At the launch, she encouraged everyone to take off their shoes and socks and walk right in, which the children, at least, were eager to do. This fountain is sonorous with the history of fountains and sculptures, from the classical to the great baroque creations onward, with intimations of Auguste Rodin, Aristide Maillol, Henri Matisse, Henry Moore, Tom Otterness, Jonathan Meese, and so on). A gift to the city, it is sure to be a crowd-pleaser. Her amiable loafers aren’t heroes, and seem willing to join you in a water fight or, better yet, a beer.