With distance comes sublime beauty, and with space travel our world is something magnificent to behold. For many, space travel is also an impossible dream, to be viewed and lived vicariously through the imagined lives of astronauts. As the vintage Nasa photographs exhibited at Breese Little suggest, however, it is that dream that funds space travel, and does so through communicating its impossible beauty, and the American Dream.

Following the critically acclaimed exhibition For All Mankind: Vintage Nasa Photographs 1964-1983 at Breese Little earlier this year (22 January – 22 February), this sequel focuses specifically on the idea of the “sublime” in historical Nasa photographs, and their place in wider American visual culture. It also links the idea of the sublime to a political framework, pointing out the commercial benefits of Nasa emphasising the visual beauty and awe of the images. What makes this point even more compelling is that the emphasis on the sublime was often artificially highlighted, in that the photographs were enhanced and constructed so as to present to the public an image and idea of outer space to match (or encourage) the sense of excitement and possibility associated with space travel itself. These photographs, in other words, were an advertisement for space travel – not personal space travel, of course, but the vicarious experience of it, through the Nasa astronauts who would go there and communicate their findings to the world. Space travel and the people involved, as well as planets and stars, were fed to the American people so they would be so dazzled by the dream and would thus happily fund it.

This process of accentuation and persuasion is central to the conception of the show, and the title itself is informed by Elizabeth A Kessler’s book Picturing the Cosmos: Hubble Space Telescope Images and Astronomical Sublime(2012),1 which explains how Nasa produced the photographs to be sublime and awe-inspiring, rather than objective reports, which were in some ways impossible, given the limits of photography in space and the massive scale of planets and other astronomical phenomena. These photographs, therefore, were intended to capture, through other means, what was otherwise impossible to capture – and therefore to hint at how magnificent the experience of seeing Earth from outer space could be. They aimed to capture the subjective experience of space travel, so that others could understand, or dream, of it too.

The exhibition shows around 80 of these photographs, including a tiled mosaic of 76 individual two inch-square black-and-white photographs, rare medium format (28 x 35cm) and regular format (20 x 25cm) photographs. Venus, Mars, Earth, Saturn, the sun and the moon are pictured in vivid, majestic colour, as too are daring astronauts and the brilliant skies amid (and around) the planets. In James McDivitt’s Ed White walking in space (EVA), taken on the Gemini 4 space flight in June 1965, for instance, the astronaut is shown experiencing movement without gravity, secured by a 25-foot umbilical line and a 23-foot tether line, his face shielded from the bright sun with a gold-plated visor. He looks sublimely free, and yet the operation is clearly meticulously carried out and full of risk. He floats between a spaceship and the Earth, on a tightrope – his own glory overshadowed only by that of his home planet. In another photo, McDivitt’s Ed White walking in space over New Mexico (EVA), againtaken on theGemini 4 space flight in June 1965, White’s body is floating even more precariously between the darkness of outer space and Earth’s turquoise glow, wrapped in a knot of cords, looking as though he is a baby in the world’s grandest womb, in an impossibly majestic pregnancy (and in what looks like the world’s most expensive babygrow, his spacesuit). The “sublime” is both excitingly alien and strangely familiar: this dream of freedom and space harks back to primal memories, perhaps, of being held comfortably in the womb, before entrance into that dazzling world, Earth.

The linking of the “sublime” to these photographs also makes sense from a political viewpoint (where the “sublime” is a currency of power and money), as well as from a purely aesthetic stance, given the sense of grandeur, meticulously achieved through light effects, cropping and composition, and the focus on alien landscapes that are captured so as to seem hypnotically abstract. As Kessler points out, and the exhibition emphasises, these aesthetic qualities are deployed in a tradition of the Romantic landscapes of the American west as painted by Thomas Moran (1837-1926) and Albert Bierstadt (1830-1902), as well as the photography of William Henry Jackson (1843-1942) and Timothy O’Sullivan (1840-82).2 The Nasa photographs communicate not only the brilliance and the dream of contemporary space exploration, but also an American cultural theme and in fact identity – that of the pioneer spirit and the endless frontier. Space is the new wild, beautiful West. It is the new world, for those who have explored everything else. Indeed, I could not look at these photographs without being reminded of another classic of American culture and spirit, F Scott Fitzgerald’s The Great Gatsby:

“And as the moon rose higher the inessential houses began to melt away until gradually I became aware of the old island here that flowered once for Dutch sailors’ eyes – a fresh, green beast of the new world. Its vanished trees, the trees that had made way for Gatsby’s house, had once pandered in whispers to the last and greatest of all human dreams; for a transitory enchanted moment man must have held his breath in the presence of this continent, compelled into an aesthetic contemplation he neither understood nor desired, face to face for the last time in history with something commensurate to his capacity for wonder.”3

Space travel was not an endeavour unique to America, but these photographs communicate a specifically and essentially American experience of it. They are nothing less than advertisements for the American Dream, and visual poetry singing of a jaded love for that dream. If Gatsby (or his creator, Fitzgerald, who died in 1940) had lived a little later on, perhaps he would have been photographing the moon up close, or pondering life on Earth from an impossibly safe distance (emotionally or otherwise). In a land where anything is possible, it is interesting that the overwhelming dream is to be so far away from it all that the details fade to oblivion, and experience is so great (or impossible) that representations of it must be tweaked and manipulated to even hint at their reality. This is a world – a mental world – of escapism to the highest degree. It is about finding a vision so unlikely and impossible that when it happens, it destroys the vision itself. The American Dream is that vision, not any reality that may come close.

And so, these photographs, and those who created them, could count on an attentive audience, in spite of whatever artifice went into finishing them. Even now, as we know the creative processes that occurred before these photographs were released, and their leaning on the special effects of a photographic studio (whether Hollywood or elsewhere), they are not really any less enchanting for that. They are records, if not of space as it actually looks, then of space as it is experienced and dreamt of. They are the pieces that make up Gatsby imaginations and naive and jaded visions alike. They are the memories and nostalgia of a generation, or even a people.

The photographs recall a time when the idea of walking on the moon was both fresh and immediate. But space travel, although not stalled exactly, plateaued in the public imagination. In his 2003 book Where’s My Space Age?: the rise and fall of futuristic design,4 Sean Topham delves into the way in which an infectious enthusiasm for not only space travel, but also design and architecture inspired by it (and “futuristic living”) collapsed into anxiety and other, less idealistic, aesthetics. To see these images now is to be reminded of an old dream – a dream that was doubted for a while, but not forgotten. As Richard Branson prepares to send people into space commercially, that dream, and the aesthetics and styles along with it, could perhaps be within sight once more. The photographs, then, are nostalgic, as well as capturing the vision of a new future – both an old vision (of the 1960s) and the latest version. As Fitzgerald writes, again in the brilliantly perceptive The Great Gatsby, that cycle of vision and failure is perhaps beyond time, for all its concern with it:

“As I sat there, brooding on the old unknown world, I thought of Gatsby’s wonder when he first picked out the green light at the end of Daisy’s dock. He had come a long way to this blue lawn and his dream must have seemed so close that he could hardly fail to grasp it. He did not know that it was already behind him, somewhere back in that vast obscurity beyond the city, where the dark fields of the republic rolled on under the night.”5

If we are in love with an impossible dream, whether it is space exploration or other manifestations of the American, romantic dream, then we are in love as much with its impossibility than its possibility. For this reason, the Nasa photographs fascinate me perhaps more than whatever is at the other end of a telescope: they are postcards from an imaginary, unreachable place. They are records of desire, if not love. They are experiences to be gained through engagement with the eyes and imaginations of other people. There is, I think, a particular beauty in that connection.

“Suddenly, from behind the rim of the moon, in long, slow-motion moments of immense majesty, there emerges a sparkling blue and white jewel, a light, a delicate sky-blue sphere laced with slowly swirling veils of white, rising gradually like a small pearl in a thick sea of black mystery. It takes more than a moment to fully realise this is Earth … home.” Edgar Mitchell (b1930), Apollo 14.6

A person can be on another planet, or the fringes of space, and yet we still connect. Humanity, it would seem, must be pushed to its outer limits to be graspable and desirable once again. Homes, like dreams, benefit from distance and yearning every now and then.

1. Picturing the Cosmos: Hubble Space Telescope Images and Astronomical Sublime byElizabeth A Kessler, published by the University of Minnesota Press, 2012.

4. Where’s My Space Age?: the rise and fall of futuristic designby Sean Topham, published by Prestel, 2003.

6. Quoted in Encountering the Astronomical Sublime (as above), page 3. 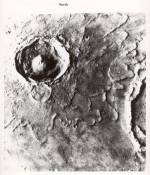 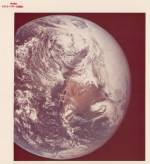