As we digest the results of the annual celebration of the Royal Institute of British Architects (RIBA) Stirling Award, it is also useful to cast an eye over the general state of the art.

David Chipperfield was announced as the winner of the prize on 6 October. It is interesting to note that David Chipperfield had two superb projects in the running. The building that won, the Museum of Modern Literature at Marbach Am Neckar, Germany, is an avowedly minimalist essay in light and proportional harmony that invites inevitable comparisons with Giuseppe Terragni's unbuilt, masterly proposal for a 'Danteum', commissioned in 1938 as a 'temple' to the greatest Italian poet. America's Cup building in Valencia, Spain, was completed in time, having been designed and built in less than one year. It is proposed as the hub for what is the world's most famously celebrated sailing competition. With these two very different buildings, Chipperfield shows his consummate professional and creative skill as an architect. The odds back in July were on the latter at 3/1 (William Hill). The Valencia building is a great pavilion with ample terraces and balconies, as appropriate for a dramatic spectator sport.

William Hill put the same odds (3/1) on Foster + Partners' Dresden Station redevelopment: an elegant, soaring extension in the grand tradition of railway station design from the 19th century, yet which incorporates - in a wholly appropriate manner - traditional masonry elements at ground level. Hill also placed Rem Koolhaas of Office for Metropolitan Architecture's new concert hall, the Casa da Musica, Porto, Portugal, at 3/1 odds. Close behind these frontrunners the odds favoured Windsor Great Park's Savill Building by Glenn Howells Architects, a somewhat contemporary modern baroque centre, at 5/1, and the much-praised Young Vic Theatre refurbishment in London by Haworth Tompkins at 7/1, although this was already a RIBA 2007 winner, as was the Savill Building.

So it was an open field, despite the pre-eminence of the frontrunner: the Stirling Prize is notorious for the extent to which other 'local' aspects can throw the odds, just like a poor water jump or a riderless horse. What is significant, and perhaps depressing, is the extent to which brilliant UK architects are best favoured by non-UK clients rather than the British. Are British clients, as Jack Pringle (the outgoing President of RIBA) suggests, less ambitious than those abroad? And Will Alsop, already a previous Stirling Prize winner, seemed not to be in the running, despite his building for Goldsmiths College in New Cross, London, his science institute for Queen Mary, University of London in Whitechapel and the Ontario College of Art and Design, Canada. Alsop's Ben Pimlott Building for Goldsmiths College has the profile of an architectural shed, but then bursts out with a dramatic group of sculptural metalworks when least expected. There is wit in Alsop's buildings, which may not amuse fellow architects of a purist persuasion, but goes down well with the users and the public. However, his less remarkable (cool school) Palestra office building in London was given a RIBA award this year: par for the course there.

London has been well graced this year by the temporary Serpentine Pavilion in Hyde Park for the Serpentine Gallery by Olafur Eliasson and Kjetil Thorsen. This pavilion has the form of an angled cone wrapped in a spiral ramp. This leads, Harry Potter-like, to a dark cavern, catching the sun with an elliptical oculus (an ancient architectural device revived), set well above the timber roof. Meanwhile, the ramp continues upwards, protected by white nylon sails, until emerging into the open. The visitor can experience all of this above treetop level with appropriately dramatic views that justify the climb. This is an eccentric spiral. Sadly, it will be dismantled all to quickly, as prescribed by the Serpentine 'summer pavilion' brief (the building comes down in November). For the future, other totemic buildings are looming. The Tate Gallery Modern extension intends to launch out on its riverside site, designed by Herzog and de Meuron. Pierre de Meuron has just received the RIBA Gold Medal. The commission, outside Britain, seemed like a foregone conclusion in favour of the Tate's previous architects. The building will stack upwards crazily, with the appearance of a Turner Prize nominee's work. One can imagine Nathan Coley straightening it out somewhat, like his recent work 'Safe House'.

And where in all this is Zaha Hadid? Well, coolly pulling in new projects: who cares if she was pipped at the post in the last RIBA Stirling Award? In Britain, as was said earlier, the problem is not the vast array of talent, but actually harnessing it to the still ongoing building boom in this country. And that quality stamp is dependent on the discretion of clients in the UK. They can choose from a wide range of age, experience and talent. But for the most part, they choose the mediocre output of hackneyed, time-serving professionals, who can offer lower fees. Never before have so many talented British architects had such a massive portfolio of work overseas, across the Atlantic, in Asia and in Europe. This balance surely has to change. But the architects cannot make this happen. It is up to the corporate clients. 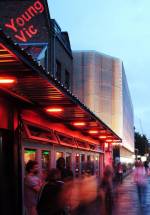